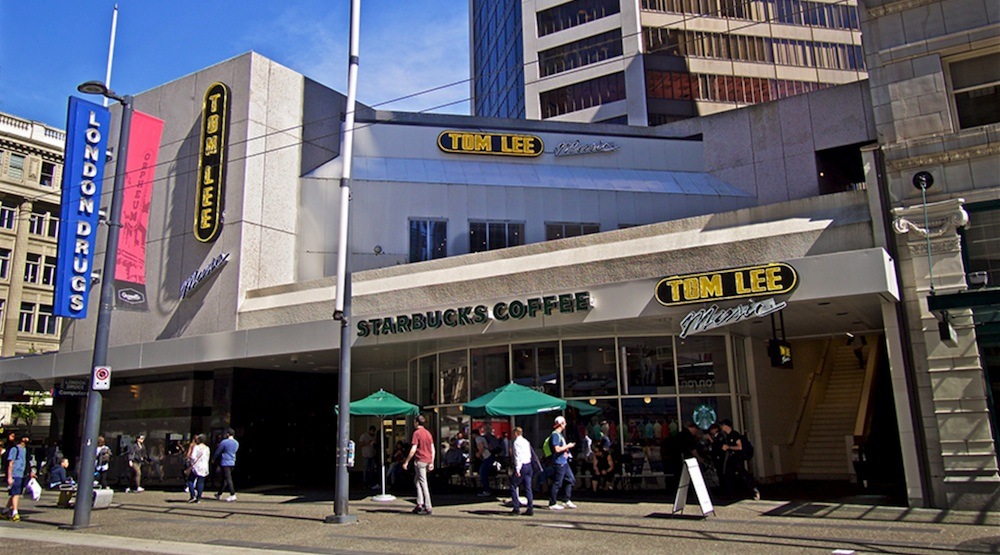 Tom Lee Music’s new location at the southeast corner of Granville and West Georgia streets, at 728 Granville Street, in downtown Vancouver has soft opened two weeks ahead of its grand opening.

The Hong Kong-based music instrument and sheet-music retailer and music-lesson provider has taken over a second-level space at Vancouver Centre mall above London Drugs that was previously occupied by language schools and Vancouver Centre Cinemas. It is situated near the core of the Central Business District, at one of the busiest corners in the city for pedestrians, and right across the street from entrances to the Canada Line and Expo Line stations. 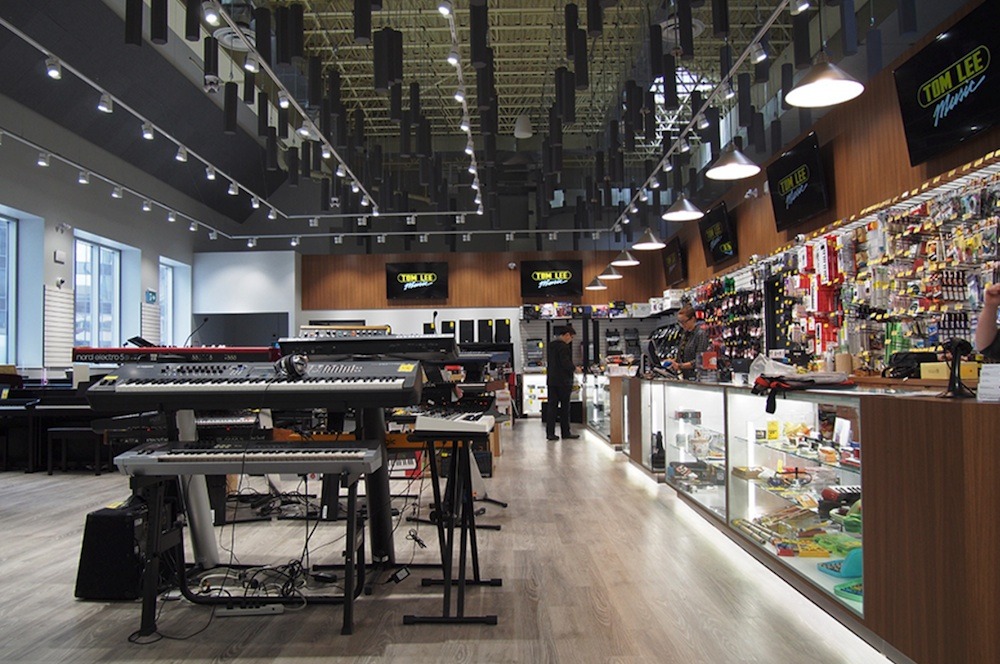 The new store is comparable in size to the now-closed longtime location at the 90,000-square-foot Tom Lee Music Building, a few blocks south on Granville Street, as the company occupied just a small fraction of that space.

Over the past few months, the vintage two-auditorium cinema space has been converted into the company’s flagship replacement retail store and showroom for the Vancouver market.

According to a press release, it features a full-line selection of top-brand musical instruments and equipment, the latest advancements in digital music technology, interactive displays, integrated sound and video technology. 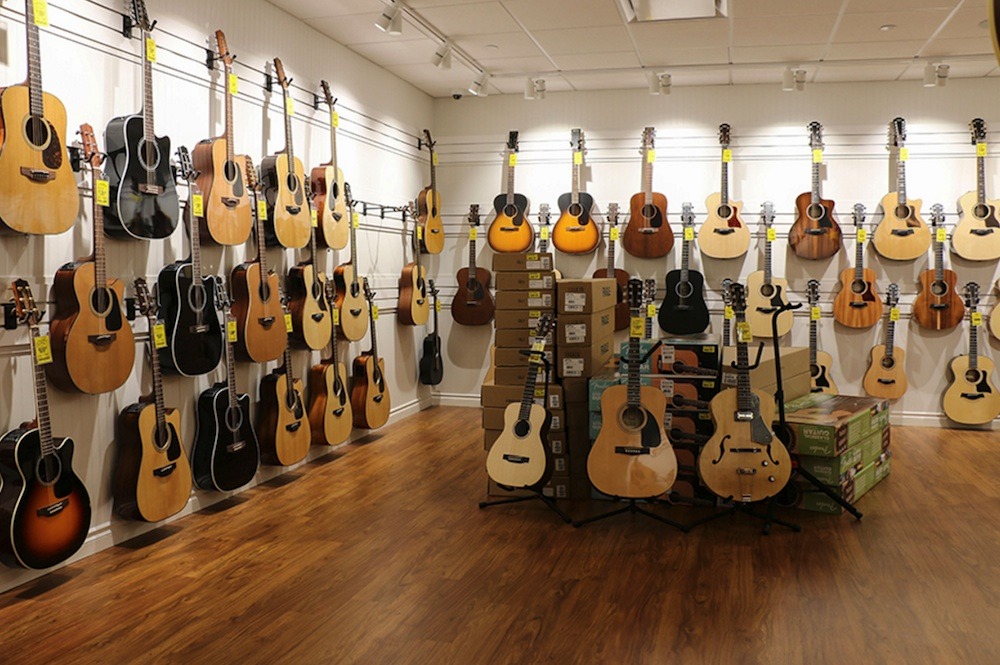 In addition, the new location has acoustically designed spaces with high ceilings and a new 70-seat ‘City Stage’ where performances can be held. 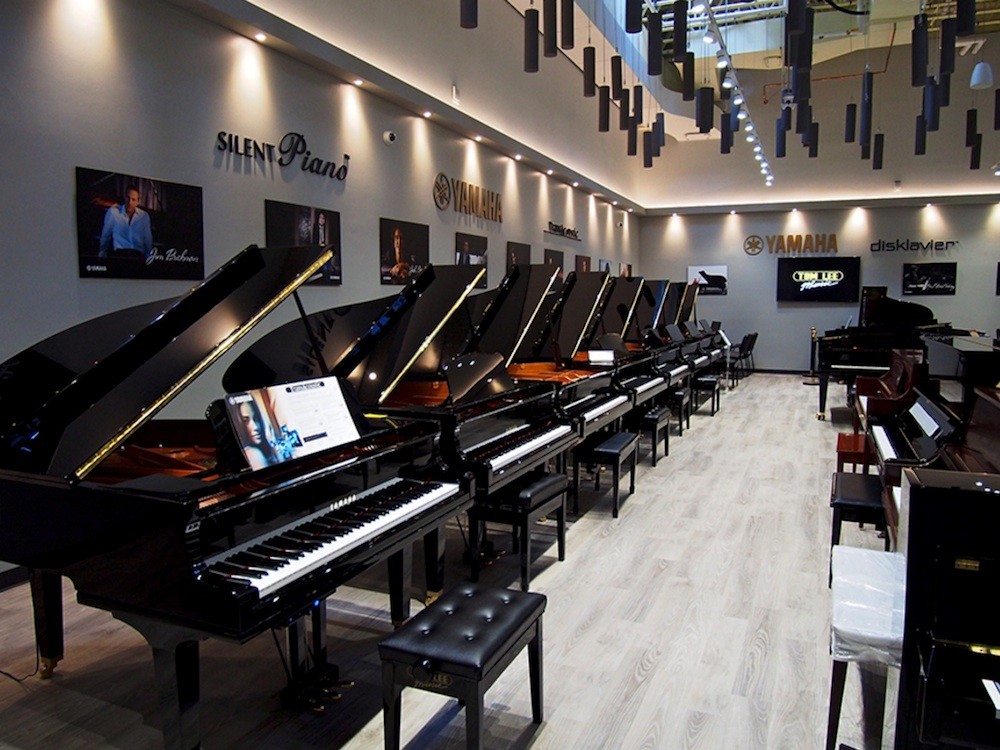 “Since we opened our doors in Vancouver 30 years ago, the way we make music – from the instruments we play on, to the tools we record with – has evolved dramatically,” said Graham Blank, Vice President and Director of Tom Lee Music, in a statement.

“We have proudly created a new space that responds to these sweeping changes and redefines what a music store can and should be. Whether an aspiring musician or a professional artist, when stepping into our new store, customers will find the products and tools they want more easily at their finger tips, moving through departments seamlessly with the modern flow and smart layout of our innovative facility.”

Tom Lee Music sold its building to Bonnis Properties last year for $38.25 million, and its former streetfront retail space is now in the process of being subdivided into four smaller retail units. The company has seven smaller retail locations elsewhere across the province.

The new location’s grand opening weekend on Saturday, June 3 and Sunday, June 4 will include a number of free workshops and live performances by artists such as Jenny Lin, Shawn Verreault, Michael Kaeshammer, Don Alder, and Ian Parker.

An escalator and staircase right next to Starbucks leads to the store entrance on the second level. 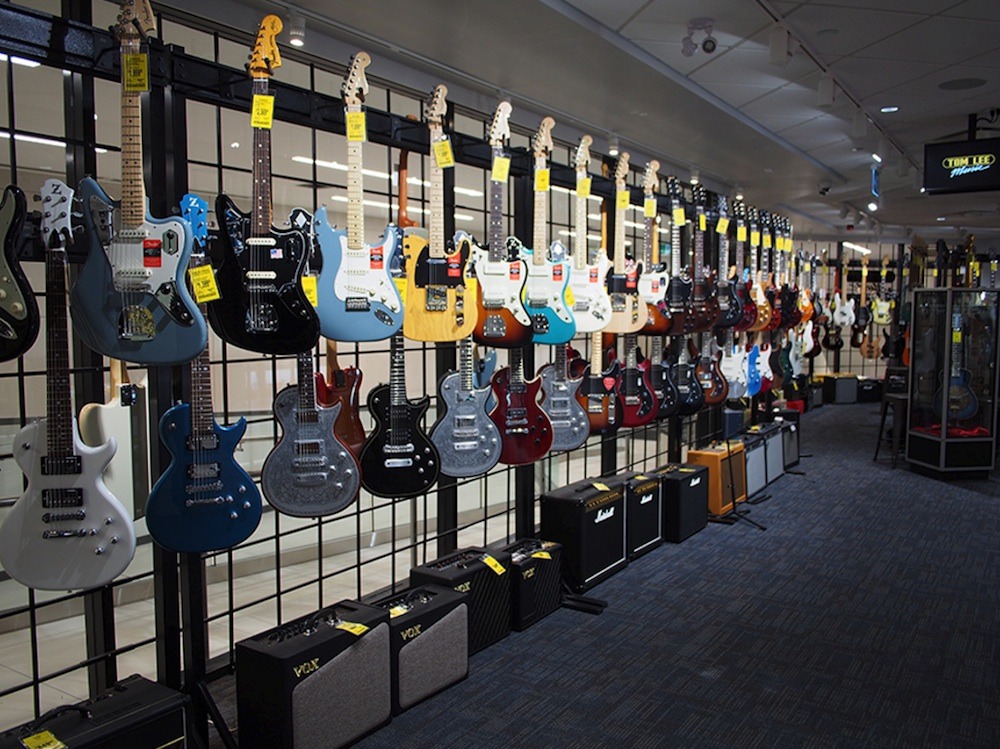