Six remarkable women, hailing from India and B.C., took to the stage on Saturday at Richmond’s River Rock Show Theatre to discuss today’s woman for TOIFA’s Women’s Day Celebration. There was no better way to motivate, elevate and celebrate women than listening to their experiences at TOIFA Vancouver’s inaugural event.

Guests were invited by TOIFA Vancouver to not only celebrate women, but to also raise funds for the Minerva Foundation for B.C. Women, a non-profit organization that actively promotes women in leadership roles.

Dinner tables cloaked in white linens and topped with sparkling dinnerware sprawled out before a stage that was illuminated by a red backlit screen. The TOIFA logo loomed high and the words Global Empowerment Of Women scrawled underneath in a bold, neat typeface.

The brainy and talented women got comfortable in cushioned chairs on stage, aglow in crimson from the lit backdrop, and spoke compelling words that sent powerful jolts of motivation throughout the crowd, which consisted of a healthy mix of females and males.

The discussion was moderated by CBC’s Belle Puri. Not to be outdone by the accolades and arresting qualities of the others, Puri is an award-winning journalist with over 30 years of experience. In 2010, she was appointed press secretary to former premier Gordon Campbell.

As the discussion gained momentum and passion, guests applauded each panelist as they began to reveal themselves through their stories, proving to be not much different than the rest of us. Who knew?

Honourable Stephanie Cadieux, Minister of Children and Family Development. Cadieux is a bona fide political participant, active in the areas of open government, youth, health and freedom of information. In 2007, she was voted one of Business in Vancouver’s 40 under 40. It is worth mentioning that Cadieux has been a wheelchair user since the age of 18.

“Today’s forum reminds us that as British Columbians, South Asians and as women, there is much more that unites us than divides us.”

Dia Mirza, Bollywood actress and Miss Asia Pacific 2000. Outside of acting, she is a humanitarian, philanthropist and entrepreneur – co-founding a film production house. 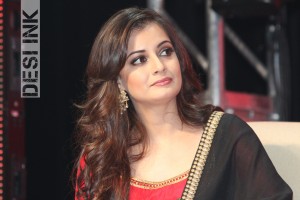 Sushma Dutt, entrepreneur and broadcaster. Dutt is iconic in the lower mainland’s South Asian community having been active as a broadcaster in radio and television since the early 70s. For many of us, there isn’t a time when Dutt wasn’t in the background. She is also a mother.

“I’ve been able to give a voice to those who do not have one.” Dutt explaining the journalistic duty she felt towards her immigrant female viewers who, at the time, were trapped within the paradox of old Indian beliefs and modern western living.

Perizaad Zorabian, Bollywood actress and entrepreneur. Raised in India, Perizaad obtained a Master’s Degree in Business Administration in New York before entering Bollywood. Currently, she is busy assisting her father in his poultry farm business, running her restaurant and being a mother and wife.

“It was wonderful to be a child without a sense of fearlessness. . . I try to give my children the same opportunities my parents gave me.” Her voice cracked at the utterance of family and our hearts went out to her. She trucked on, her words wrought with emotion as she struggled to regain her composure.

This was a poignant moment in that it was so womanly. Emotion is a quality most associated with females, it is intrinsic. To accept women is to embrace every quality that makes a woman.

Dr. Shimi Kang, Clinical Associate Professor at the University of British Columbia. Having trained as a physician at Harvard, she has over ten years of experience in the medical world, particularly in women’s and children’s health. She has received awards in the fields of addictions and mental health. In 2010, she was invited to join the David Suzuki Foundation as a member of the climate change counsel. She is also a mother and wife.

“I am a great juggler.” Kang is referring to the great act that the multi-faceted woman of today performs, juggling. Her hope and ambition is that it becomes less juggle and more balance for her children and future generations.

Diana Hayden, Bollywood actress and Miss World 1997. As a result of her parents break-up, then 13-year-old Hayden dropped out of school and has been working ever since. She got herself a bachelor’s degree in English and today she is a model, actress and author.

“You never lose until you give up. That’s when you’ve lost.” Hayden, the most prolific speaker of the night, impressed upon us the notion of no pain, no gain. “It doesn’t come easy.”

She ended her piece by reminding everyone that at the time women began fighting for equality, like-minded men also had barriers to break. “In the beginning when women were fighting for our rights, it’s men that let our voices be heard – so, thank you for that.”

Written by Neelam Sharma (@_neelamsharma), a columnist for Vancity Buzz and contributer to Desi Ink Magazine. Connect with Desi Ink @desiinkmag and on Facebook.