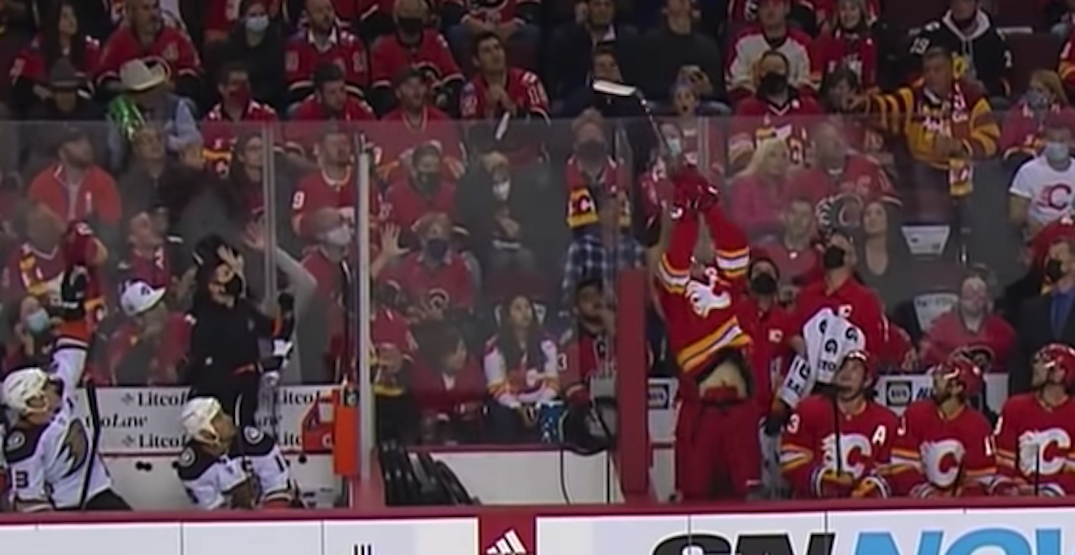 A heads-up play by Calgary Flames winger Matthew Tkachuk on Monday night was the perfect mix of impressive, hilarious, and peculiar.

And it may have been the first time it’s ever been done before.

Mikael Backlund was going to take a penalty for the Flames when he flipped the puck out of play from his own zone. The puck was sailing high over Calgary’s bench and was going to end up in the crowd, resulting in a delay of game penalty.

But not on Tkachuk’s watch.

Sitting at the end of the bench, Tkachuk jumped to his feet and then leaped into the air, batting the puck down with his stick. Anaheim Ducks players immediately protested as the puck was likely going to end up multiple rows back at the Saddledome.

Referees couldn’t give Backlund a penalty for puck-over-glass because, well, the puck never went over the glass. Instead, the refs handed Tkachuk a penalty for interference.

Players have received interference penalties from the bench before, but certainly never like this.

In the end, Tkachuk wasn’t rewarded for his incredible hand-eye coordination, as not only did he end up in the penalty box, the Ducks scored on the ensuing power play and the Flames lost 3-2 in overtime.

Either way, the play was a big hit with fans.

Tkachuk protecting the fans behind the bench. Could he be any better of a person?

tkachuk takes a penalty for being too much fun

Honestly i’m okay with that penalty by Tkachuk that was hilarious. Also dude has to be so locked in on the game to do something like that #Flames

Lmao what the hell was that Tkachuk 😂😂

That penalty on Tkachuk is for outsmarting the rule book. It's not delay of game if it never clears the glass.