Over 100 Fringe Festivals, 30 different shows and a road trip to the mining town of Wells, B.C. If TJ Dawe’s life could be exemplified by one of his shows, it would most certainly be Marathon.

“I’m heading up to Wells to perform at the Sunset Theatre,” Dawe said during a stop in Quesnel. “The woman who runs the theatre used to run the Vancouver Fringe Festival in the late ’90s, and because we have a good relationship, she brings me up to perform.

“I also have actor friends who perform during the summer in Barkerville, so I get to visit with them too. It’s an adventure.”

TJ Dawe, born Ti-Jon David Dawe, is gearing up for his 103rd Fringe this September at the Vancouver Fringe Festival. To celebrate over 20 years of Fringing, Dawe will be performing TJ’s Kitchen, an entirely different one-man show each day: Tracks (September 11), The Slipknot (September 12), Medicine (September 14), Marathon (September 16), Toothpaste and Cigars (September 17) and his new Burn Job (September 19).

“I love performing at the Fringe because it’s an opportunity to take risks,” he said. “Audiences are open to new experiences. If it’s good and innovative, they want to see it.”

Dawe studied theatre at the University of Victoria, graduating with a Bachelor of Fine Arts in 1997. As well as writing and performing his own material, he also collaborates extensively with other artists. He co-wrote the Fringe hit Dishpig with Greg Landucci, directed Charlie Ross in The One Man Star Wars Trilogy and One Man Lord of the Rings, and had Toothpaste and Cigars adapted into the 2013 feature film The F Word starring Daniel Radcliffe and Zoe Kazan. 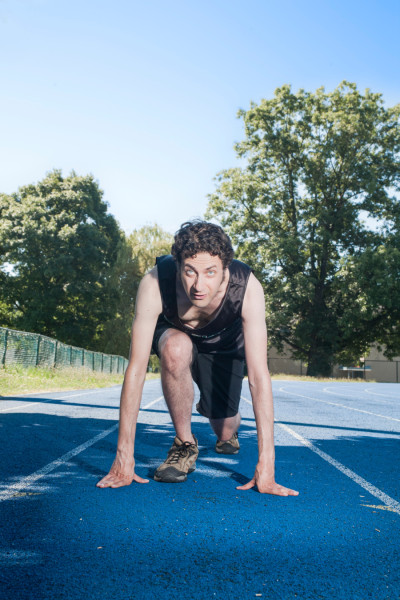 “The thing that keeps me going is the creation of new art,” Dawe said. “My career is one where I’ve created my own work. My oldest show was back in 2001, and my newest show, Burn Job, debuted two weeks ago at the Edmonton International Fringe Festival.

“Burn Job is largely about growing up in Mount Pleasant and in Burnaby. It’s about the parts of me that I thought I disowned, but discovered I still need. It will make audiences think.”

Though Dawe has performed in Fringe Festivals around the world, he still loves performing for the hometown crowd.

“What I love about the Vancouver Fringe is that they’re producing more programming outside of the Festival. This is a fabulous bridge to the community; fringe theatre deserves to be seen around the year.”

TJ Dawe performs at the Vancouver Fringe Festival, happening September 10 to 20. He is also teaching a creativity workshop at the Surrey Arts Centre and teaching students how to create their own solo shows at Langara College. For more information visit his website.