Losing in horrifying fashion has become somewhat of a tradition in Vancouver, so over the years Vancouverites have come up with different ways to cope with it. This allows us to keep watching the Canucks who seem intent upon pushing us down an emotional staircase of sadness any chance they get.

The Seahawks, as many of you saw, lost in such a soul crippling way in Super Bowl XLIX that it simply reeked of Vancouver sports. Of course, Seattle won last year, so Seahawks fans can easily fall back on those memories, but a loss like last night, well, that’s going to stick with you for the rest of your life, no matter what you do.

Luckily 1994 trained me on how to handle such a situation, and I thought it would be nice if I could share some of that knowledge with any Seahawks fans out there who are having trouble coming to terms with what happened on that fateful goal line. Here are some tips to get you through the next few months of your sporting life.

1. There is no right answer to your question

After 1994, the only thing you would ask anybody was “Why did Lafayette hit the post?” It was depressing to watch everybody in the city ask the same question over and over again. Answers ranged from “Because Lafayette hates me” to “I’m never allowed to be happy, am I?”

In Seattle, the questions will be different, but the spirit remains the same. Prepare yourself to be doing this: 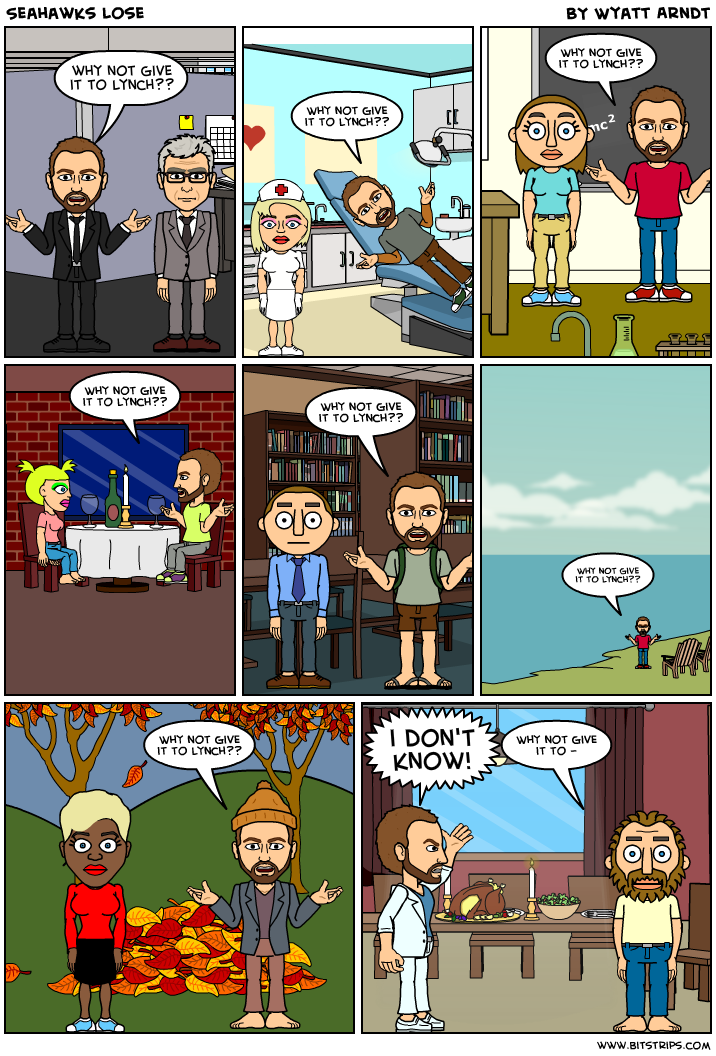 The important thing to remember is there is no right answer, which means there will be multiple targets in your anger induced sports rants. In 1994 Vancouver took turns switching our anger from Lafayette for not scoring, to Messier for being a cheap bastard, and to Gary Bettman for rigging everything in the Rangers favor.

Seattle fans should be sure to give equal amounts of anger to the offensive coordinator for making that play call, to Russell Wilson for not calling an audible, and to the NFL rigging things for the Patriots. Heck, throw in something about Deflate Gate while you’re at it. Everything is fair game at this stage!

The important thing is to always be angry. The longer you remain angry, the longer you avoid being sad about the god awful loss.

2. Resist the urge to stab co-workers

People will be talking about this game tomorrow. Even people who aren’t football fans will have caught wind of it due to Buzzfeed or something similar. 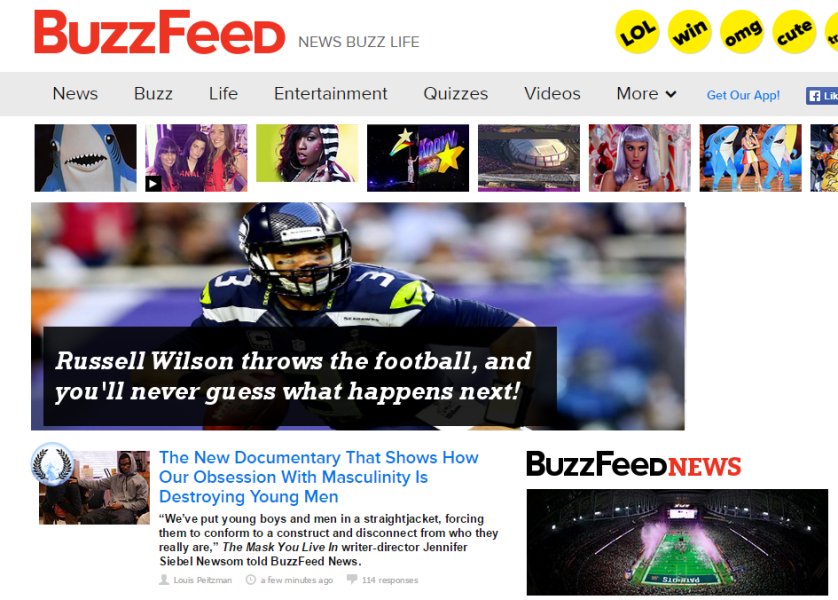 Good small talk is the gold bullion of offices everywhere. When people are forced to interact with co-workers they don’t know too well, they scramble for something to say. This is why the weather is such a hot topic, because hey, everyone knows about weather.

If you’re a well known Seahawks fan, every person in the office who knows this, will now want to talk to you. Even worse, they will actively seek you out so they can get their small talk time out of the way early in the day. This will lead to conversations that to them, have the emotional impact of watching somebody get kicked off of the Bachelor, but to you, has the emotional impact of your best friend telling you he just slept with your significant other while eating chicken wings. 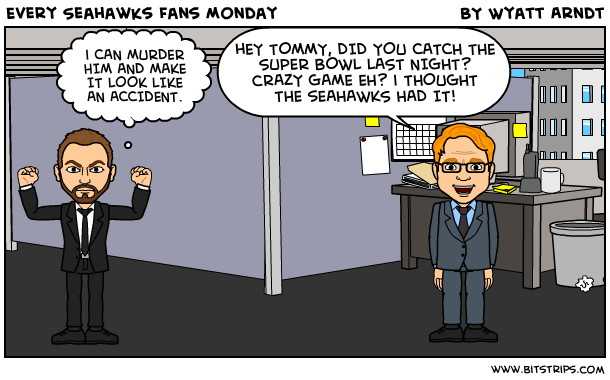 The important thing here is to not stab anybody. Remember, they mean no harm. They just think they’re talking about a subject you like, which is kind of nice. They have no idea that they just made your list of people to kill before the year is up. The only way to get through this is to use the go to cliches of:

“I have no idea how it happened either.”

“Yeah that was messed up.”

Just cycle through these until the questions stop. Feel free to combine them for extra fun!

“Yeah man, it was messed up, I have no idea how it happened either.”

3. Do not watch highlights of the game 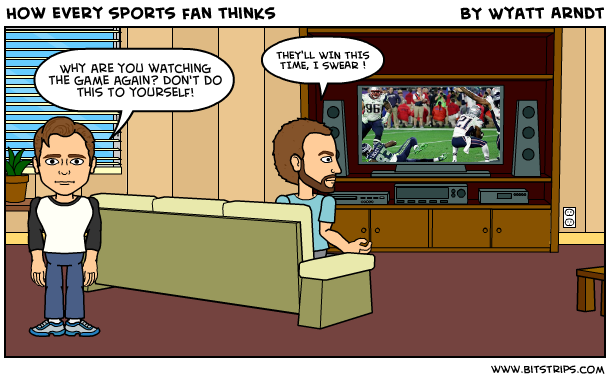 Sports fans are a weird bunch sometimes. I don’t know how many times I can come across the 1994 highlights and as I watch them, part me of me always starts thinking “but what if they won? What if I remembered it wrong all these years and they actually won? I better watch and find out.”

It’s messed up, but it happens. You’ll find yourself watching YouTube highlights of the game against the Packers. You’ll watch that amazing comeback. You’ll start getting those feelings of “It was meant to be” all over again. Then you’ll venture into watching some highlights of the Super Bowl game. Not all of them, just the good stuff. Then you’ll get a bit squeamish as it nears the end of the game, but you’ll still watch, because there is a sick sick part of you that wonders if it will change if you watch it again. You start imagining what it would look like if they won, and how your life would have changed for the better because of it. You probably would have won the lottery or gotten a promotion.

It makes no sense whatsoever, but it will happen. Do not watch any highlights for at least three years.

4. Be careful of NFL playoff intros from now on

Much like how Messier pumping the Stanley Cup in 1994 became an iconic part of all future NHL playoff videos, so too will that Wilson interception for all NFL playoff videos. The only thing you can do is pretend to check your phone every time a montage of the NFL playoffs comes on, or if you’re the dramatic type, run out of the room screaming like your eyes are on fire.

There is truth to the idea that misery loves company, and sometimes talking it out with another fellow hardcore fan will help soothe your soul. Just watch out for groups of five or more fellow fans, because that can quickly turn into a ball of hatred and anger as each person tries to out talk the person beside them.

The urge to go through your closet, burning everything Seahawk related might be large for some, but you must resist. People are expecting you to be sad today. Wear your jersey with pride and talk about how proud you are of your team for fighting until the end, and how at least they won last year.

In Vancouver, we didn’t have the option of remembering the team winning the year before. All we got to do was pretend how awesome it was just getting to the Finals (it’s not).

7. Accept the fact that Tom Brady will never stop being shoved down your throat

Tom Brady will be talked about his spot as the greatest quarterback of all time. You will have to prepare yourself for this, because that talk will only intensify over the next few months. It will also continue well into the future, when Brady becomes a TV personality, because he is TV pretty and pretty much can have any job he wants. Just accept the fact Brady will be this lurking specter of awful, hanging over your team, for the rest of your life.

The only way it gets worse is if your team signs Tom Brady to a three year deal for way too much money, and he then goes on to tank your team. 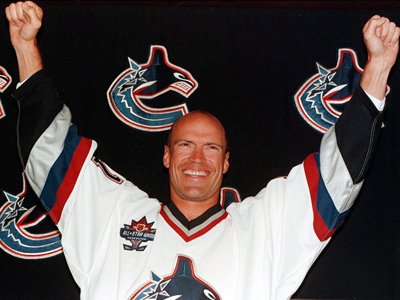 Every run to the Finals gets new fans to jump on board the teams that go to the end. There is nothing wrong with this, as it is part of sports life and is often times how new fans get made.

What you want to avoid are the bandwagon fans who think they’re just as dejected as you are over the team’s loss and want to talk about it with you. You know, the guy who just bought a Wilson jersey last month, who pretends to be super bummed out next week, even though their eyes are still smiling. “Man, what a way to lose, huh? I’m SO mad, hahah. That was crazy. Rawr! I just want to punch somebody haha! Ah man. Oh well, there’s always next year!”

Real Seahawks fans will be dead inside and will enjoy sitting in sullen silence.They will simply grunt and nod at fellow heartbroken fans after the initial “Why didn’t they run it in with Lynch?” question has been asked.

New fans will not have the emotional bond with the team to understand the depths of the horrifying sports loss that just occurred and will want to talk about the game to no end, in a gratingly upbeat manner.

Avoid them at all costs.

9. Prepare for the relapse 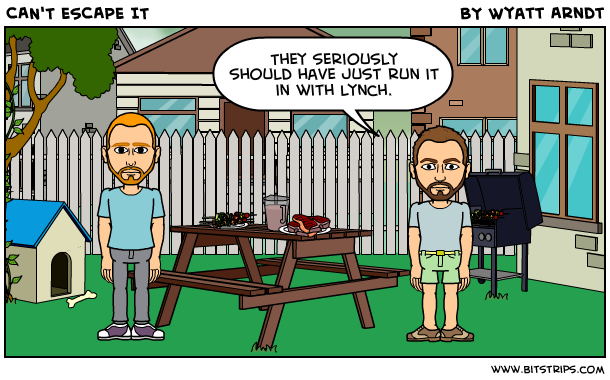 At some point you will almost convince yourself that it was a good play call to throw the ball and you’ll think you’ve moved on with your life. This illusion will come crashing down at a BBQ or something.

The next week will be spent watching YouTube videos in the dark while drinking.