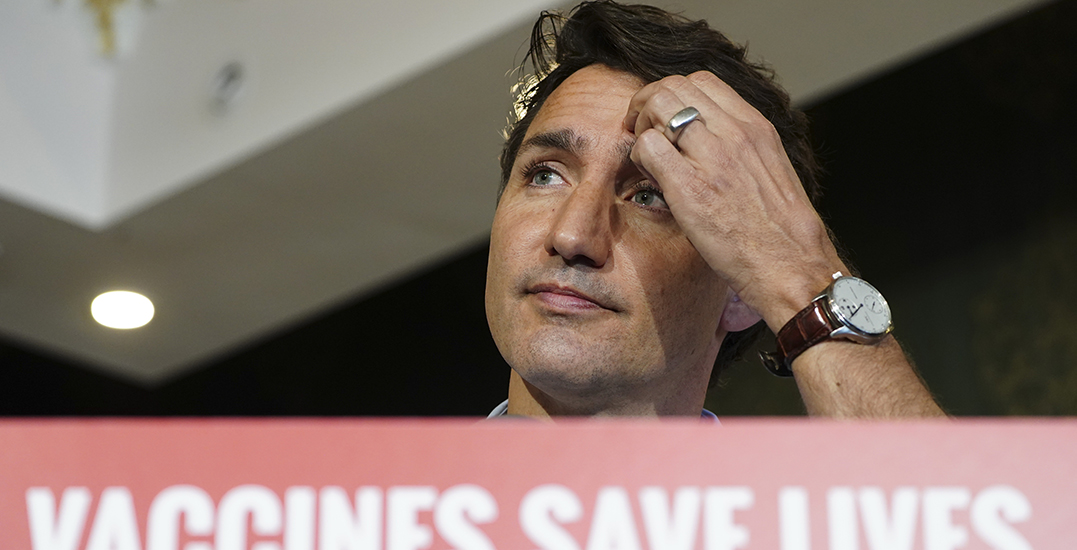 Justin Trudeau had dime-sized rocks thrown at him as he was confronted by an angry crowd outside a campaign event in London, Ontario, on Monday. The Liberal leader said some of the projectiles may have hit his shoulder, but that he wouldn’t bow to the demands of what he called “anti-vaxxer mobs.”

Here is a partial list of other Canadian politicians who have had to face objects being thrown at them:

Monday, September 6, 2021: Trudeau was pelted with gravel at a campaign stop in London, Ontario.

Thursday, September 2, 2021: A man cracked an egg on Maxime Bernier’s head after asking for a photo with the leader of the People’s Party of Canada.

June 15, 2013: A cup of juice was thrown in then-Toronto Mayor Rob Ford’s face at the city’s Taste of Little Italy festival.

January 25, 2010: Gail Shea, then federal fisheries and oceans minister, was hit in the face with a pie by a protester angry about the seal hunt.

July 7, 2007: Alberta Premier Ed Stelmach was the target of a thrown pie, but a member of his security detail “took a pie for the premier,” said witness Greg Melchin, Alberta’s housing minister. The pie thrower was convicted of assault and sentenced to 30 days in
jail.

July 5, 2003: Alberta Premier Ralph Klein was hit in the face with a banana cream pie at the Calgary Stampede.

April 12, 2003: Former Quebec Premier Jean Charest had two pies thrown at him as he campaigned in the provincial election. The pie throwers were reported to be members of Les Entarteurs (“the pie throwers”), whose stated aim was to deflate the egos of people they consider self-important.

August 16, 2000: Prime Minister Jean Chrétien was hit by a pie to the face at a pre-election campaign event in Charlottetown. The pie thrower was reported to have said he was a member of the PEI Pie Brigade, apparently an offshoot of Les Entarteurs.

May 7, 1999: Members of the group also hit former Liberal leader Stephane Dion with a pie.

August 20, 1982: A crowd of hundreds threw rocks, eggs and tomatoes at the vacation train that prime minister Pierre Trudeau and his family were riding in, resulting in one window being smashed. The train had already been pelted by food in Alberta and Manitoba after the prime minister had given the middle finger to protesters in Salmon Arm, BC.

June 3, 1976: Former agriculture minister Eugene Whelan was hit on the head with a milk jug during an Ottawa demonstration by dairy farmers.