The impact of 1920s provincial prohibition policies still linger over British Columbia long after it ended nearly a century ago. If you have lived or traveled to other parts of the world, or even ventured to provinces like Quebec, you would know that B.C. has some extremely antiquated and draconian laws over alcohol.

Simply put, B.C.’s liquor laws treat alcohol as if it were a poison or magical potion. These highly archaic and illogically restrictive policies contribute to the public view (particularly for youth) of alcohol as a forbidden fruit, a coming of adulthood, and a rebellion against authority.  Relative to the many other nations (particularly in Western Europe) that have built a significantly more mature view of alcohol consumption in their societies, responsible drinking is not taught in B.C., and such a societal norm and consensus can only be taught through a pragmatic openness and enlightenment towards the very perception of alcohol.

A society that shows it can responsibly enjoy alcohol, without treating it as some pariah or taboo, is also a sign of a mature society. However, more often than not, because of the actions of a very small minority of people (whether it be drunk drivers or the binge drinkers who instigated the 2011 Stanley Cup Riot or even the overreaching campaigns of modern prohibitionists who themselves do not understand alcohol and the issues), the rest of the population suffers from the lack of opportunity for mature enjoyment. A more mature view and open practice to responsible drinking would significantly decrease the number of cases of “binge drinking.” To make alcohol a taboo implies that drinking should be done secretly and rarely.

If we look at 1920s prohibition history, draconian laws that were passed to curb societal problems caused from irresponsible drinking only led to further backlash and even greater social problems. In 1987, prohibition was introduced to young adults in the United States when a high drinking age of 21 was enacted as the policy across the nation. As a result, irresponsible drinking behaviour increased in the United States due to not only the growth of “underground drinking” outside of adult supervision, where same-age individuals congregate, but also because of the lack of knowledge of responsible drinking behaviours when such knowledge was more difficult to attain due to the illegality of consumption. Similar prohibition arguments can also be made for the never-ending “War on Drugs,” particularly with marijuana (a drug which in fact poses little harm according to studies), which criminalizes drug usage instead of treating it more effectively as as public health and education issue. However, I will leave arguments for marijuana legalization and the highly positive results of Portugal’s decriminalization of all drugs for another day.

Furthermore, given the above evidence against prohibitive policies, in what context do many of today’s B.C. laws on liquor consumption make any logical sense?

The insanity with liquor regulation goes to quite an extent in this province, here is a list of just a few of our arcane laws:

Earlier this year, the provincial government legalized the serving of liquor at theatres (however, these establishments must apply for a license). The government also allowed restaurant-goers to “bring your own bottle” (BYOB) of wine to enjoy during dining (although, it’s subject to a “bottling fee” that some restaurants may choose to apply). Legalizing theatre drinking and BYOB was a step forward, and another organization has recently announced its hopes to build on the momentum that led to the successful theatre and BOYB campaigns.

The Campaign for Culture has an aim to reverse B.C.’s policy on restricting establishments from serving discounted “happy hour.” Their main tenets are three-fold: (1) to include more social interaction, (2) to allow people to make responsible decisions, and (3) to remove limits on businesses. Here is a statement from their campaign website:

Embracing safe and enjoyable social practices make our culture more dynamic and inclusive. The feeling of freedom and independence that you experience when you are able to engage openly with your fellow peers, whether it is at a local restaurant or social venue, are the moments that become both memorable and essential in living a balanced lifestyle. When you can leave your homes and experience the cultural strength of British Columbia, being able to enjoy the plenitudes that your province has to offer in a safe and responsible way, you are afforded the opportunity to embrace the true vitality that life has to offer.

Why is British Columbia’s regulatory framework surrounding liquor products so restrictive? Are British Columbians not capable of making responsible choices? What are the reasons for curtailing greater social interaction, responsible decision making and business autonomy?

The ability for establishments to offer small discounts on drinks at select times during the day is a policy that is in place in all other provinces outside of British Columbia. It is time to bring forth your concerns on policies that affect your lifestyle. It is time to ask the tough questions that get the answers. British Columbia, Where’s our Happy Hour?

The Campaign for Culture is currently in the process of raising awareness about their initiative, you can support their cause by learning more through their website and following them on Facebook and Twitter. They will be raising the stakes this fall with a petition to end the ban on happy hour. Please support their cause! 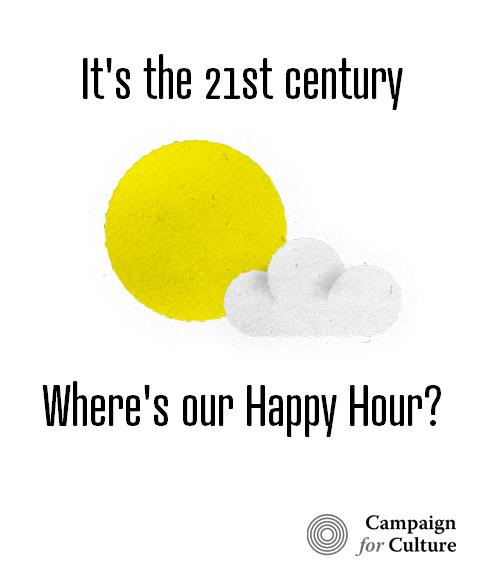