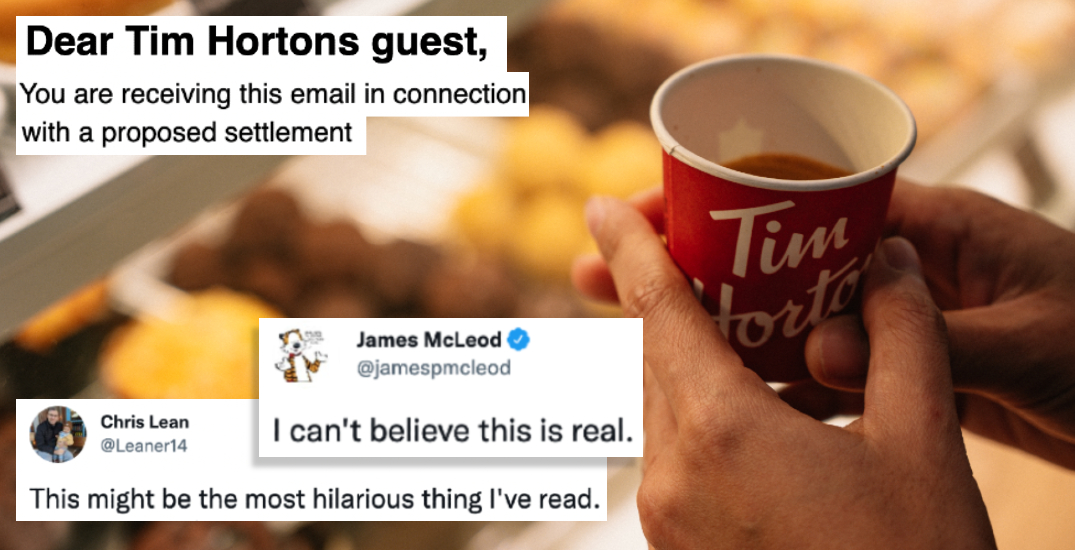 If you have the Tim Hortons app installed on your phone, you might have gotten an email about a proposed lawsuit settlement today.

The coffee chain landed a national class-action lawsuit when it was revealed that it had tracked “vast amounts” of information from Canadians through its app for years.

In June 2020, the Office of the Privacy Commissioner of Canada began an investigation and found out that the Tim Hortons app violated privacy laws.

Sensitive information, such as users’ minute-by-minute movements and location data, was tracked by the app, even when it wasn’t open. While this happened between April 1, 2019 and September 30, 2020, it was only made public in June 2022 following the investigation.

Now, Tim’s has a settlement proposal that is awaiting approval from court but it might not be worth all that user data you unknowingly provided them with.

“As part of the proposed settlement agreement, eligible app users will receive a free hot beverage and a free baked good,” read the email sent to Tim Hortons app users on Friday.

“Distribution details will be provided following approval, in the event that the court approves the settlement.”

Ok so Tim Hortons spent more than a year silently and illegally tracking users through their mobile app, and the proposed class action settlement is … a free coffee and a donut.

I swear to fucking god. This is real. pic.twitter.com/eu8P7c2kqO

Lawyer James McLeod took to Twitter to air out his grievances with the proposal.

“Okay, so Tim Hortons spent more than a year silently and illegally tracking users through their mobile app and the proposed class action settlement is… a free coffee and a donut,” he said. “I swear to f**king god. This is real.”

He also noted that in the settlement proposal, the company said the retail price of Tim Hortons “hot beverage” was around $6.19 plus taxes, which has led many to ask the question: in what world?

This has gotta go in a textbook or something. pic.twitter.com/ibSPFLl0km

The chain is being called out all over social media for the measly compensation, which only amounts to a few dollars worth of consumables.

Tim Hortons tracked their customers illegally and lied about it. So, yeah, a tea and muffin should cover it. pic.twitter.com/HBm7uGaPCM

People are shocked at the audacity of the multi-billion-dollar chain offering this Roll-Up-The-Rim level settlement.

Some are even wondering what the lawyers representing Tim Hortons were thinking.

Bro who fought this case for Tim Hortons??? I’ve never seen a class action lawsuit that ended with A FREE HOT BEVERAGE AND BAKED GOOD pic.twitter.com/eHlY0Fhuag