Throwing Shade is defined by Urban Dictionary as the act of talking trash about a friend or acquaintance. In a similar vein of irreverence, Throwing Shade is also a hit comedy podcast co-hosted by Erin Gibson and Bryan Safi. Called one of the top 20 podcasts of 2015 by Entertainment Weekly and Rolling Stone, Throwing Shade covers a mix of women’s rights, gay rights, pop culture and adult topics.

In advance of their live show at The Biltmore Cabaret on Wednesday, September 9, Vancity Buzz sat down with Erin and Bryan to talk comedy, politics and what they’re fired up about.

How did Throwing Shade get started? Was there an immediate connection or was the partnership formed over time.

EG: I was totally in love with Bryan from the moment we started working together at Infomania (weekly satirical news-show that aired on the Current TV television network from 2007 to 2011). He used to come in my office and ask to borrow $500,000 and I thought it was the funniest joke I’d ever heard. Then I heard it 400 more times and, you know what? Still funny.

BS: It’s true – Erin and I had a quick bond at Infomania. She’s super smart, hilarious and has the loudest laugh I’ve ever heard, so if you make her laugh, you will feel like the funniest person on the planet. And asking for money was not a joke – I legitimately need to borrow half a million dollars from you. 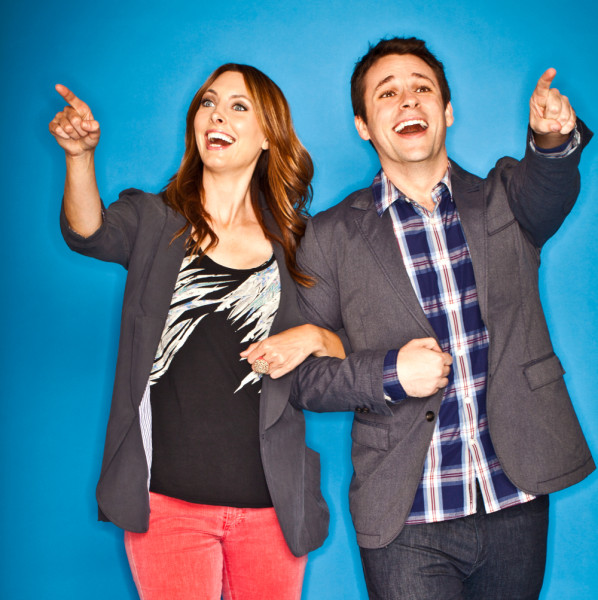 Throwing Shade focuses on women’s rights, gay rights and pop culture. What drew you to these subjects?

EG: For me, it was the natural next step after Infomania. Taking what I had done on that show and expanding it to other topics and taking off the parameters that TV placed on me. Before Infomania, I definitely only focused on comedy and I wrote the label “feminist” was like a lapel pin. Now, it’s a car wrap. A classy, sophisticated car wrap.

BS: I became very passionate about gay rights during California’s Prop 8 marriage disaster in 2008. And then my eyes opened to a totally new world of mixing comedy with politics. It’s almost like being a nerd in school – the only way to get back at the bullies is to make fun of them and show everyone else what dummies they really are. I’m thrilled we get to do that. The show is still comedy first, message second. I think people listen better when it’s funny.

Why do you think that podcasts have exploded in mainstream popularity over the past decade?

EG: It’s a format where counterculture can thrive and underserved people can get content that truly speaks to them.

BS: It’s like the radio but even more uncensored. You can be crazy, filthy, stupid, smart and completely bonkers. Not to mention most people listen in their cars or while they’re doing their dishes, so it feels personal. I listen in the bathtub. Just me nude in the bath tub, no water, listening to podcasts.

Throwing Shade has just crossed the 200 episode milestone. What do you attribute to the podcast’s longevity?

EG: We’re still trying to make sure each episode is the best it can be. We started the show doing two issues each. That was paired down to one each. There’s lots of stuff that has come and gone, but I’d like to think that we’re not afraid to experiment and then dump things in the garbage if they don’t work.

BS: We’re just way better at what we do. We know what buttons to push in each other to make it the funniest, smartest and most ridiculous show it can be.

What was the inspiration behind taking Throwing Shade on the road?

EG: My friend Rob Delaney was a huge influence. I saw him setting up his own indie tour and we thought, “we can do that.”

BS: We did a live show in Philly after Erin and I were asked to participate in a comedy in politics conference at the University of Pennsylvania. We sold out fast, and realized that there was no one really doing what we do. People wanted it.

You are self-described as “Homosensual” and “Feminasty” – what does that mean?

EG: Feminasty means being a feminist while being true to whoever you are. Doctor, cheerleader, lawyer, Lancome employee.

What is making you mad in the world right now?

EG: I’m currently/always very upset about the rolling back of abortion rights in the U.S. If Republicans actually cared about the rights of children, they would focus on the 17 million living in poverty and not the unborn ones that women can’t afford. It’s not about saving lives, it’s about controlling or punishing women. America is to women as otters are to baby seals. Don’t Google why.

BS: The fact that the phrase “religious freedom” is used to discriminate. It’s backwards and vile and gross. Gay rights have progressed fast in this country, but discrimination hasn’t backed down. I think that’s a misconception. The fact that I’m not good friends with Taraji P. Henson also infuriates me. 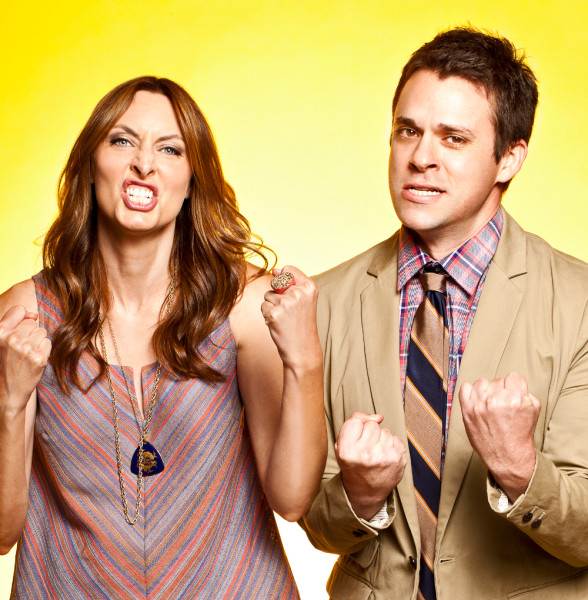 What can Vancouver expect to hear about at the live show?

EG: I’m talking about the state of women in STEM careers and the movie The Boy Next Door staring J Lo and Aidan from Sex and the City.

BS: I’m talking about how wedding catalogs and websites talked to same-sex couples. One piece of advice was to register at a CD store. A CD store! In 2015! Also, I’m talking about my obsession with Donald Trump.

What’s next for Erin and Bryan?

EG: I opened a fashion photography chain/counseling center for Anne Geddes victims to live out their infant trauma by putting them in large cabbages and baskets. We’re opening a new store in St. Louis, so I’ll be busy with that.

BS: I’m on Young and Hungry, an ABC Family sitcom that premieres August 19. So watch that! You can also always find me on the runway modelling for Tommy Bahama.

Throwing Shade Live is at The Biltmore Cabaret on September 9. For more information visit www.throwingshade.com.