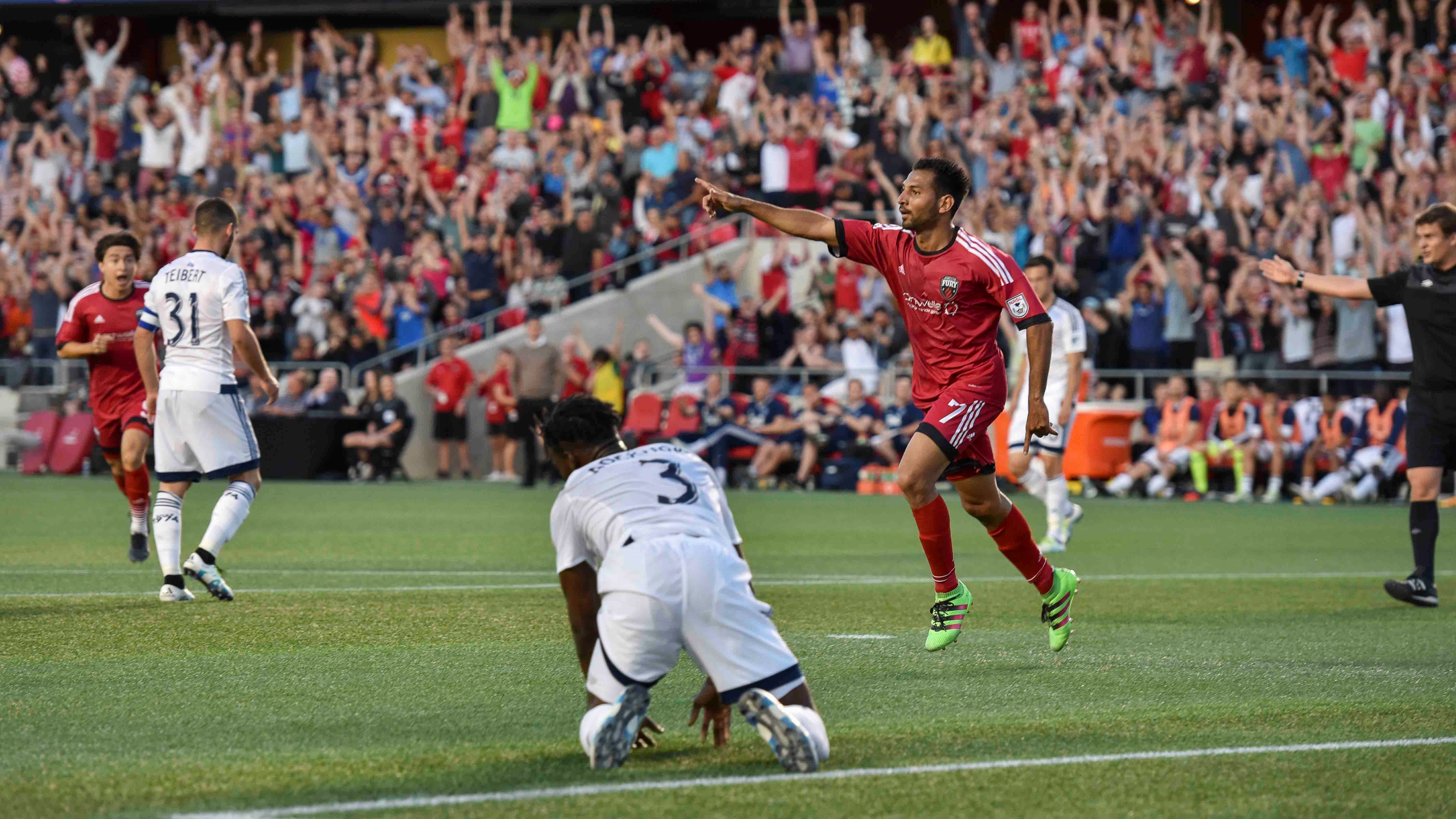 The Vancouver Whitecaps started their defence of the Canadian Championship on the wrong foot today falling by score of 2-0 at TD Place Stadium in Ottawa in the first leg of the tournament’s semifinal.

The Ottawa Fury was missing Canadian internationals Marcel de Jong and Julian de Guzman, both away on international duty. Led instead by MLS veteran Jonny Steele, the Ontario side proved too much for the visitors to handle. The home team made it difficult for the Blue and White to settle on the pitch and provided little to no space or time for the Whitecaps to display their best football.

It was Steele himself who put the Fury ahead early in the game with a beautifully taken shot from the left flank that a diving Paolo Tornaghi had no chance to save. The goal at the third minute of play made it all that much more difficult for the ‘Caps who found themselves chasing the game for the majority of the ninety minutes.

The Fury did not let up in the first half and the lead could have been doubled if it wasn’t for a great save by the Italian keeper at the 36th minute.

36′ Spectacular! Tornaghi with a beauty of a save to keep it a 1-0 for the Fury#VWFC #canChamp pic.twitter.com/pWfz2GgcDu

The lead would be doubled, however, right before half time after Paulo Junior found a rebound inside the Whitecaps box and drilled the ball in to complete the final 2-0 scoreboard.

Being the Canadian Championship, Carl Robinson sent out a very young lineup, rich in Canadian content. Six Canucks were selected to start the game in the nation’s capital. It was a gamble that did not pay off for the Welsh tactician. His team looked discombobulated from the start. The Blue and White struggled to keep possession and threading more than two passes at the time was an impossible challenge all game long.

Kind of game where Teibert should be able to put his foot on the ball and have some control in midfield. Instead still in the “terrier” role

When you have a young and inexperienced squad, then you add lack of playing time together, and finish up with an amped up opponent, the loss is no surprise. “We played a young group today and it was a challenge for them” Whitecaps FC coach Carl Robinson admitted after the match. “I think some of them got a little bit surprise in the first half because of the tempo of the game…. I have always given my young players chances. I gave them chances today. Some took them and some didn’t.”

Robinson sent in the cavalry at the 60th minute as Octavio Rivero and Kekuta Manneh took to the pitch in search of a response, or at least a precious away goal. The players that made way were midfielder Ben McKendry and Nico Mezquida. The McKendry substitution showed the Whitecaps’ willingness to commit bodies forward; however, the Mezquida substitution left some scratching their collective heads.

In a game where positive combinations proved to be a relentless issue, it seemed logical to keep the Uruguayan on the pitch. The chemistry between Uruguayan countrymen Mezquida and Rivero is well documented so leaving the pair on the pitch together could have provided a much needed spark for the ‘Caps in the final third. Alas, Manneh and Rivero struggled to get service or create meaningful scoring chances.

Impotent and out of ideas were the ‘Caps tonight. A lot for Robbo to think about… #OTTvVAN #canChamp #VCup

3. The hill to climb

The Whitecaps will return to BC Place next Wednesday for the return leg. In the words of Robison, the Blue and White have given themselves “a hill to climb.” The head coach acknowledged that while this game lent itself for the introduction of a young group of players, at the end of the day, the goal is to win football matches. He went so far as to confirm that there will be changes in the team for the second leg.

It doesn’t take much reading between the lines to know that the Whitecaps lineup next week will more closely resemble that seen week in and week out in MLS action. Achieving the balance between providing young players with opportunities to continue their professional development and winning football matches is tricky to achieve.

It seems that this week was dedicated to the former but next week must be focused on the latter.