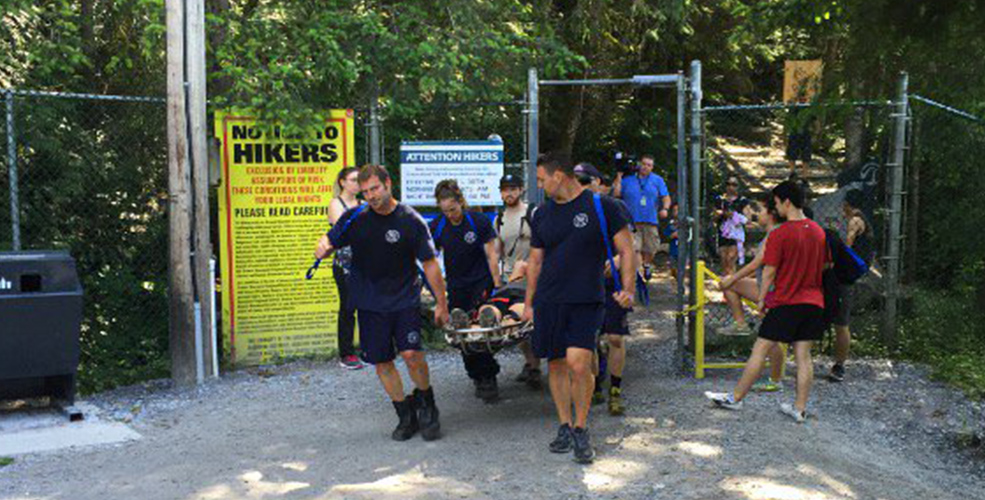 Three hikers were rescued from the Grouse Grind on Sunday morning in a span of two-and-a-half hours after a combination of factors – including record-breaking temperatures – caused them to fall ill.

Brian Hutchinson with the North Vancouver Fire Department tells Daily Hive that they responded to a call at around 9 am about a hiker in distress. A team was sent in and he was carried off the trail in a stretcher. While that first hiker was being assessed, a passersby told the team that another hiker 200 metres up the trail also needed help due to heat exhaustion and a preexisting medical condition. A third team was brought in with a stretcher to carry her off the Grind.

Finally, while the first patient was being carried down the trail, the team ran across a third hiker in need of help.

“All three were related to a combination of conditions – the weather certainly plays a role,” Hutchinson says. “Personal preparedness in terms of knowing your limitations, hydrating, proper nourishment, and, in some cases, in terms of taking your proper medication prior to engaging in these types of activities were all contributing factors.”

Temperatures on Sunday exceeded 25°C, according to Environment Canada, and records were broken in many parts of the province.

“We certainly encourage people to get out onto the trails and enjoy the environment that we all live in here, but at the end of the day, we’re there to support and assist where possible, but we’d rather not have to,” Hutchinson adds.

He says he expects his teams to perform many more rescues on the North Shore this summer, whether it be hikers, mountain bikers, or anyone else getting out into the woods.

Last of 3 hikers in distress has now been returned to trailhead by District Fire Fighters pic.twitter.com/X4yiYImmuf

Hutchinson says to take the following steps before embarking on a hike as difficult as the Grouse Grind: