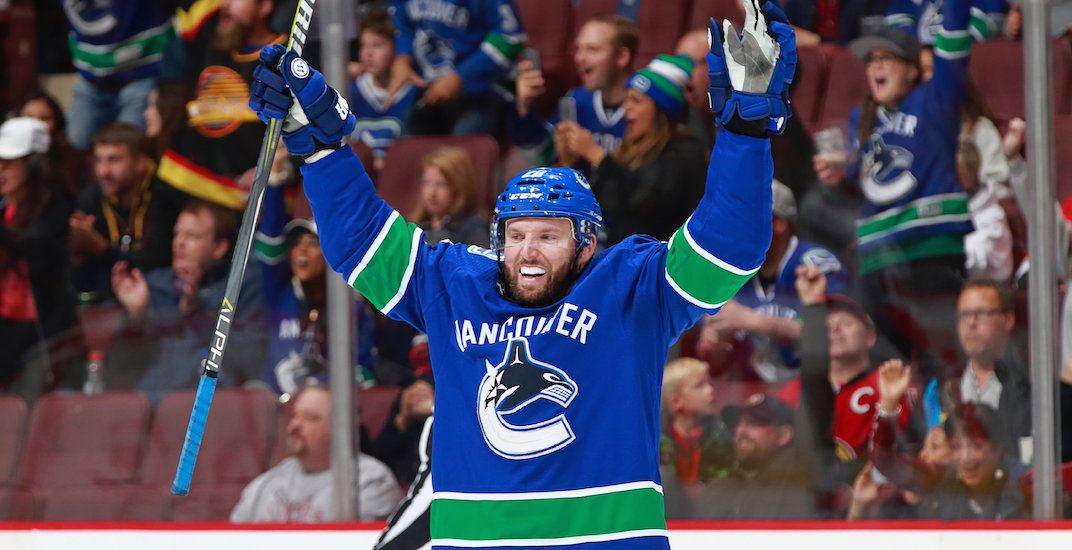 Thomas Vanek has been one of the feel-good stories for the Vancouver Canucks this season.

Since signing a one-year, $2 million deal back on September 1st, he’s been full value for his contract.

He has 32 points in 45 games, scoring 13 of them on the power play. His 5-on-5 points per 60 minutes production (2.12) ranks him in the company of Blake Wheeler and Alexsander Barkov (data courtesy of Natural Stat Trick).

But with the Canucks 11 points out of a playoff spot, they should certainly be sellers heading into the NHL trade deadline on February 26. Vanek’s performance this season coupled with his low price tag will make him an in-demand player for Jim Benning and company.

While Vanek’s value isn’t what it once was – he was traded for a first round pick, a second rounder, and Matt Moulson four seasons ago – he should garner some interest around the league. Detroit got a third round pick for him at last year’s trade deadline, so that’s the benchmark – we’ll see if that changes.

With that in mind, here are some potential landing spots for the 33-year-old Austrian winger:

With the fourth-best record in the Western Conference, this is once again a year where the St Louis Blues have designs at winning their first-ever Stanley Cup. At the same time, they’re just four points up on ninth spot, so they could be motivated to make a couple of moves to better position themselves for the playoffs.

Top left winger Jaden Schwartz is expected to be back by the end of the month after sustaining an ankle injury and should slot back onto the top line. After that, however, their depth on the left wing is very thin. They’re playing Ivan Barbashev (one goal in 18 games this season) and Dmitri Jaskin (4 goals in 41) on their top two lines right now, so Vanek would be an upgrade for them.

The Blues are 19th in the NHL in terms of goals per game, and 29th on the power play – two areas where Vanek can help immediately.

The Boston Bruins are firmly in a playoff spot, sitting second in the Atlantic, 13 points up on the fourth-place team in the division. They have plenty of prospects to offer, which could come in handy if a bidding war ensues.

What makes Vanek such an intriguing fit for the Bruins is his potential use on the power play.

While Boston ranks 11th in the league with the man advantage, their second unit has been sub-par. Consider that 40% of Vanek’s points this season have come on the power play, and it’s clear he’d be able to help them out.

The Washington Capitals are once again one of the top teams in the Eastern Conference, currently ranking first in the Atlantic Division.

They lost some of their forward depth from last year’s 118-point team with the departures of Justin Williams and Marcus Johansson in the offseason and haven’t been able to adequately replace them.

There’s also the matter of price.

The Capitals swung for the fences last year giving up a lot – a first-round pick, a second rounder, plus two other players in Brad Malone and Zach Sanford – to acquire rental Kevin Shattenkirk. They probably want to avoid high-priced options this time around like Evander Kane or Max Pacioretty and go for someone like Vanek who is sure to cost a lot less.