I did a double-take reading BBC News when I thought our beloved new stadium design was the featured image for a report on soccer. But without hesitation I sprung to find answers, and I learned there’s some “inspiration” in BC Place.

The stadium in the image above is actually Stadion Narodowy, or National Stadium in Polish. And if it looks eerily like BC Place it’s likely due to the engineering from the same firm that did the new roof on BC Place. The world-class engineers are Schlaich Bergermann und Partner from Stuttgart, Germany. And when you compare the exterior of Stadion Narodowy you see a remarkable resemblance to both the interior and exterior of BC Place. 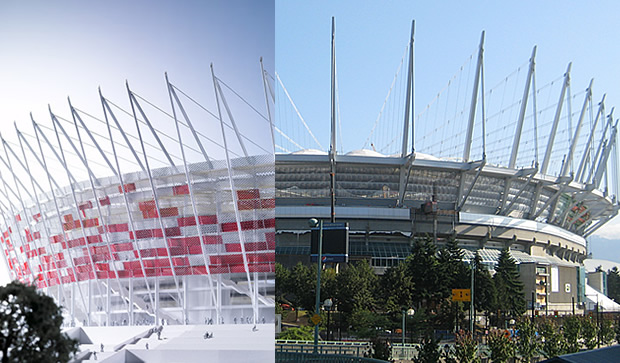 But does this mean BC Place is not original? I beg to differ. Although Stadion Narodowy was completed just two years before BC Place (edit: guest comment correctly points the time frame is actually closer), we definitely got the better end of the stick. The high definition sound is a huge improvement from the old inflated days, and our roof is bigger than any else in the world. Size matters, and so does the brightness of the LEDs on our walls. We also have the derelict 1980s running in the blood of BC Place and a couple of CFL Grey Cups won at home. Now that I think about it, we pretty much took BC Place to the show “Pimp My Ride”.

If the engineers “cut and pasted” a little inspiration between the two projects, it wouldn’t at all surprise me. Such thinking is human nature. However, I’m surprised it didn’t manage to reduce the cost of the new roof. Did you know that if you were to factor inflation, building the old inflated BC Place today in 2012 would cost $260 million? I’m really curious to learn how just the roof amounted to $563 million. Now what about the cost of Stadion Narodowy? Poland’s new stadium—from scratch—cost $495 million in Canadian dollars.

The general rule is that a renovation costs more than a rebuild. However, the the total cost of BC Place is now $823 million. Are we happy with the new BC Place? In my opinion, the upgrades are paying off. I have more desire to attend events and the experience is greatly improved.

Schlaich also designed Soccer City for the 2010 FIFA World Cup. And they’ve added their touch to the new One World Trade Center that is nearing completion. They’ve got more top projects Asia and Germany so if anyone tells you that Vancouver is just a glass city, then you say we’re a world-class German-engineered glass city.