As far as cities go, Vancouver is certainly on the younger side. But even though it’s only been around for 130 years, the place we call home has still witnessed its fair share of interesting events.

It’s a city on the move, but when things are moving so quickly it’s important to take a look back, especially when you’ve got a history as rich – and occasionally as weird – as Vancouver’s.

So to celebrate the 130th anniversary of the city’s incorporation on April 6, 1886, here are 25 things you might not know about Vancouver.

Before being named Vancouver, the town was called Gastown, and then Granville, B.I. (Burrard Inlet).

2. It was named after a famous explorer…

Vancouver was named after Captain George Vancouver, an English explorer famous for leading the expedition that charted a bunch of the Pacific Northwest and explored the area which would eventually become Vancouver.

3. … who actually has his name on a lot of things…

Vancouver’s name was also used for Vancouver Island, Vancouver, Washington, a mountain in New Zealand, and a mountain on the Yukon/Alaskan border. 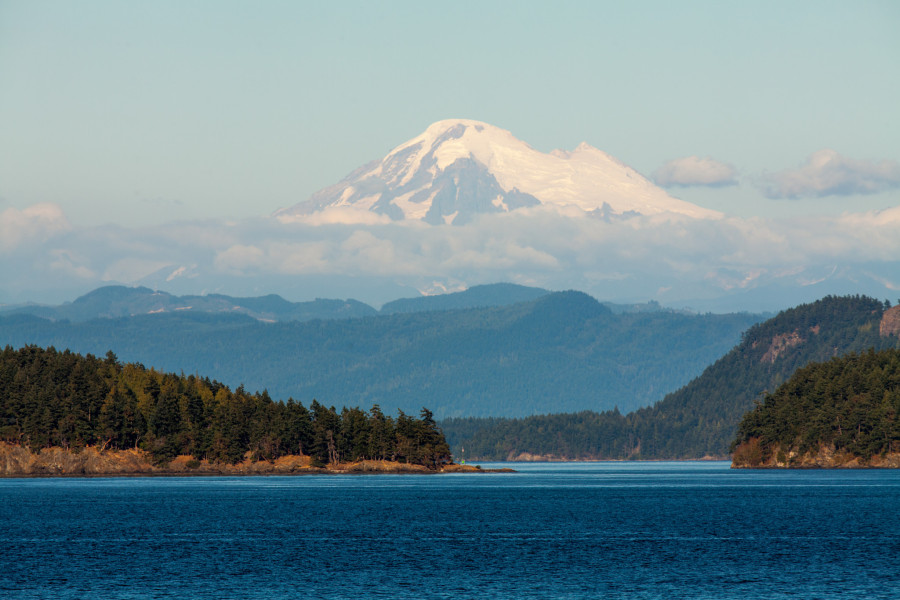 Vancouver was the first explorer to enter the Burrard Inlet, which he named after his friend, Sir Harry Burrard. He named a lot of stuff after his friends, including Mount Baker, Mount St. Helens, the Puget Sound, Mount Hood, and Mount Rainier.

During the lead-up to the 2010 Winter Olympics, hotels and businesses in Vancouver, Washington fielded calls from all over the world, with people looking to make reservations for the Olympics, which were taking place 400 kms away!

There has been talk in the past of Vancouver, Washington changing its name to Fort. 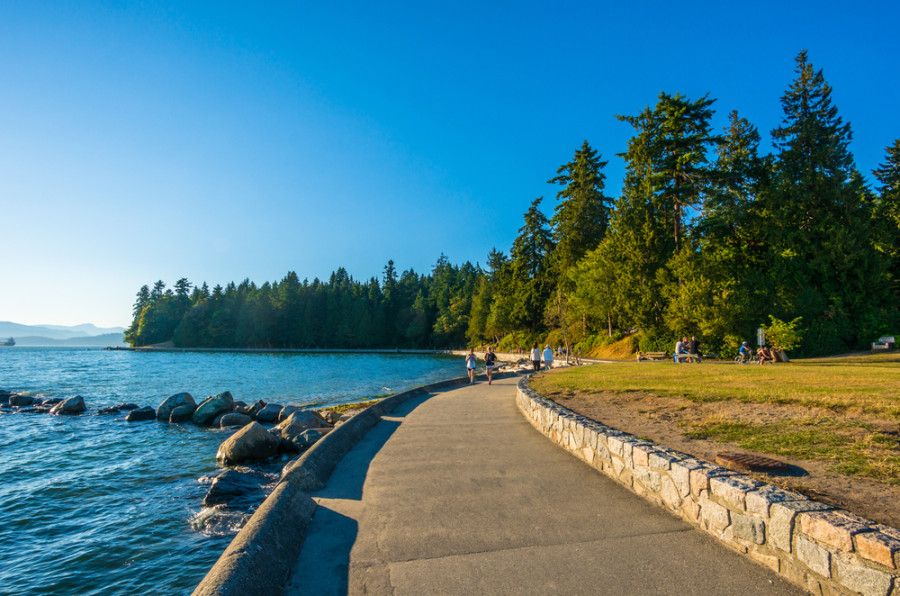 8. Grey squirrels are a relatively new feature in the park.

All of the grey squirrels in Vancouver are descended from eight mating pairs who came from New York City in 1909.

9. The California Roll was invented here.

The California Roll is widely thought to have been created by Japanese-born Vancouver chef Hidekazu Tojo, as a sushi a dish that could be enjoyed by locals. 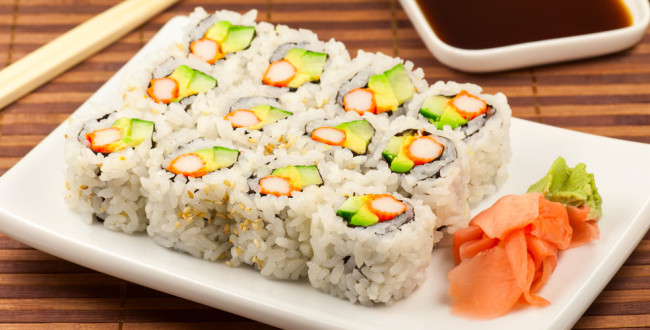 10. A lot of languages are spoken here.

Vancouver is one of the most linguistically diverse cities in Canada, with 52% of residents having a first language other than English.

Vancouver’s 9 O’clock Gun, which fires at 9 p.m. every night, was originally fired at 6 p.m. to remind salmon fisherman to halt fishing Sunday.

12. And it was originally made in England.

The gun was cast in Woolwich, England, in 1816, before being shipped to Vancouver in 1894. 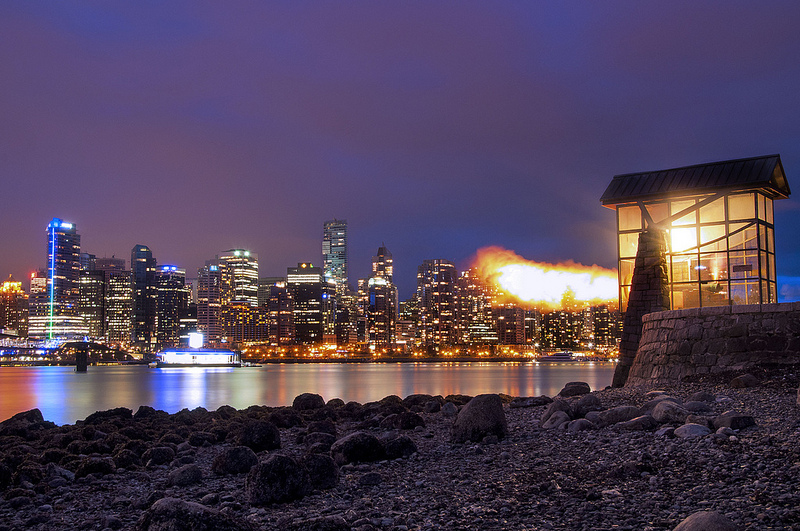 13. Dynamite used to substitute for the gun.

The 9 p.m. firing of the gun was used to allow ships in the port to set their chronometers. Until the gun was installed for that purpose, the keeper at the Brockton Point Lighthouse detonated a stick of dynamite over the water every night at 9 p.m.

14. The gun has only ever not fired five times.

The gun has been silent five times. Once during World War II. Once in 1969 when it was stolen by UBC Engineering students who demanded a “ransom” be paid to the B.C. Children’s Hospital for its safe return. It was silenced again in 2007 during a work stop. Then in 2008 it fell silent when UBC Engineering students painted the gun red, and finally in 2011 for no explained reason.

15. Vancouver once boasted the tallest building in the British Empire.

The Marine Building, located at 355 Burrard Street in Downtown Vancouver, was once the tallest building in the British Empire at 321 feet. 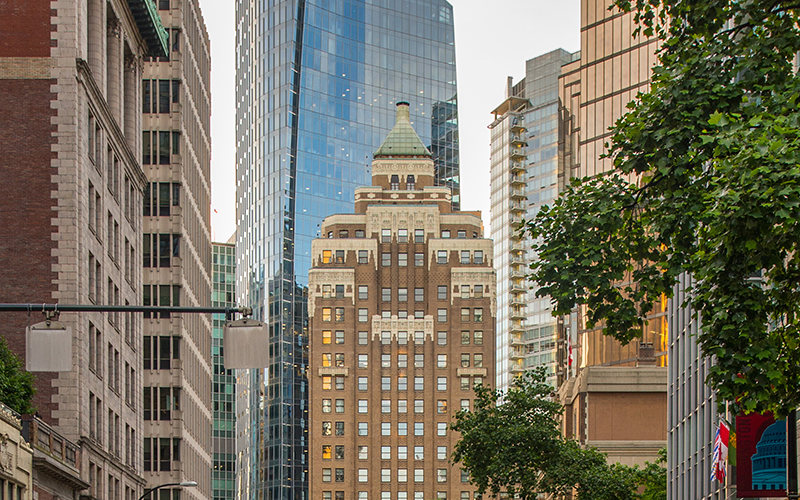 16. The oldest building in Vancouver is old.

The Hastings Mill Store, now moved from it’s original location and residing at 1575 Alma Road, is the oldest building in Vancouver, originally construct in 1865.

17. The Lions Gate Bridge was built by a beer company.

The Lions Gate Bridge was originally built by the Guinness Beer Company to connect Vancouver to a residential development.

18. Some of the biggest shows and movies are produced here.

Lions Gate Entertainment, also known as Lionsgate, was founded in Vancouver. Lionsgate produces TV shows and movies like Mad Men, The Hunger Games franchise, The Day After Tomorrow, and many, many more. 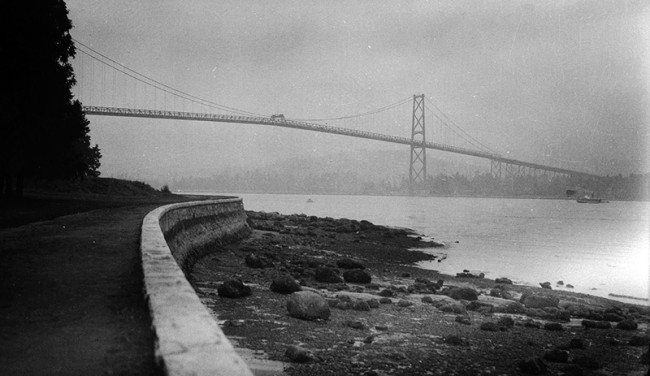 19. It has serious ecological cred.

International environmental activism group Greenpeace was started in Vancouver in 1971, and is now considered the most visible environmental group in the world.

Metro Vancouver now has over 200 sushi restaurants, not including grocery stores.

21. One of the largest Pride Parades in the world takes place here.

Vancouver is home to one of the largest Pride Parades in the world, with over 500,000 attendees annually. 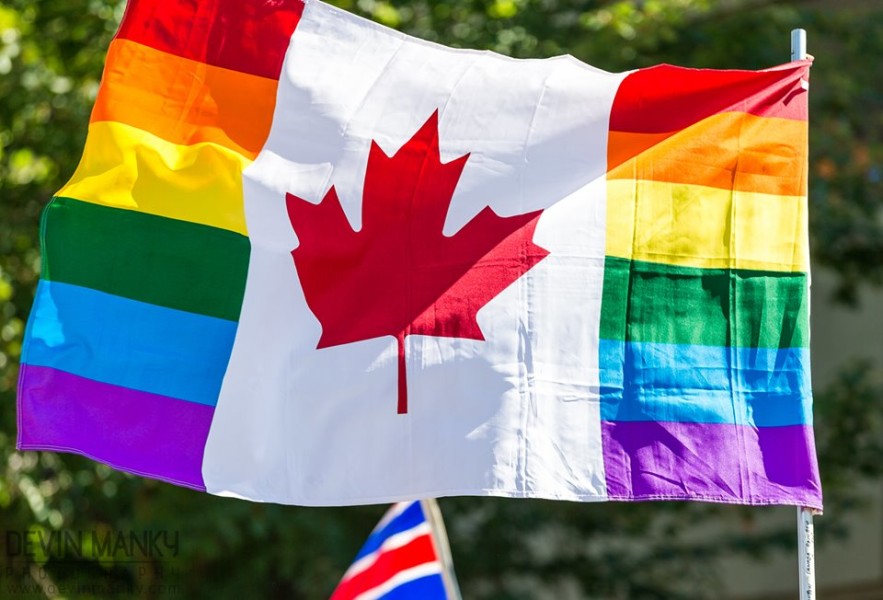 22. Downtown has a lot of Starbucks locations.

There are 44 Starbucks locations in the downtown Vancouver peninsula alone.

Legendary science-fiction author and long time Vancouver resident William Gibson is credited with coining the term “cyberspace.” One of his short stories, The Winter Market, is set on Vancouver’s Granville Island.

24. Vancouver has even been in video games..

The video game Mass Effect 3 features an opening sequence set in a future Vancouver that is under attack from extraterrestrial space ships. Landmarks such as the North Shore Mountains and Canada Place can be seen.

Errol Flynn, star of Golden Age swashbuckler movies like Captain Blood and The Adventures of Robin Hood, died in Vancouver in 1959 at the age of 50.