So, you’re going to Montreal. Awesome. It is one of Canada’s most popular and hip destinations, so you’ll want to snap away to encapsulate those postcard moments. Am I right shutterbugs?

And in this city, it’s not too hard.

Architecture is beautiful and picturesque. Delicious food is in abundance. Libations are always flowing. And did we mention the culture and public art?

Read on to learn the 5 most photo-worthy moments in Montreal you’ll want to cross off your list.

1. The Graffiti on St-Laurent Boulevard 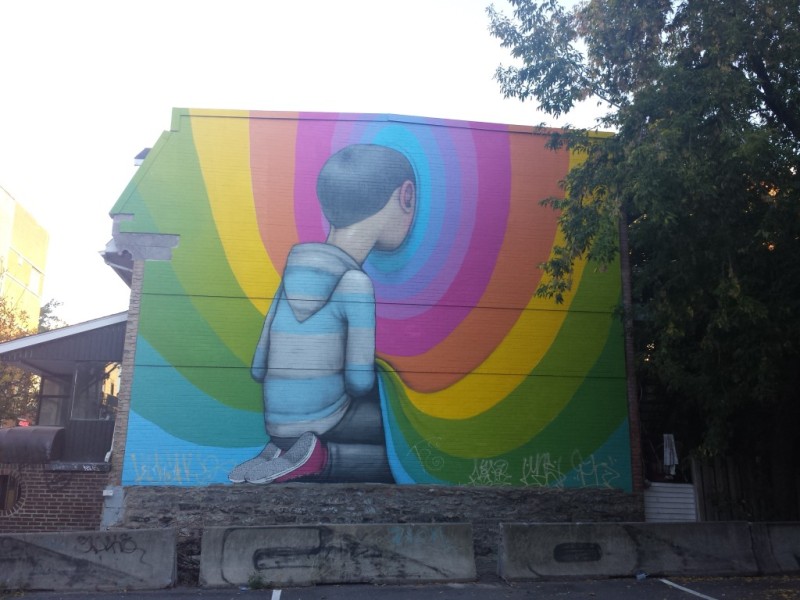 Montreal oozes culture. Take a stroll along St-Lauren Boulevard to see the various street art and graffiti murals that surprise you along the 15-block stroll. You’ll see everything from Tupac to rhinos, mad scientists, abstract pieces and even…Tweety Bird. We’ll call it an eclectic mix, and if you’re coming from Vancouver where street art is sparse and not condoned, you’ll love it as much as I did.

Fourteen of the murals are officially a part of the Mural Festival – a free urban art festival that brings together artists of all types under their umbrella – but some of the best remain to be guerilla-style so keep your eyes open and camera ready.

Tip: click here for a map that mark the 14 murals 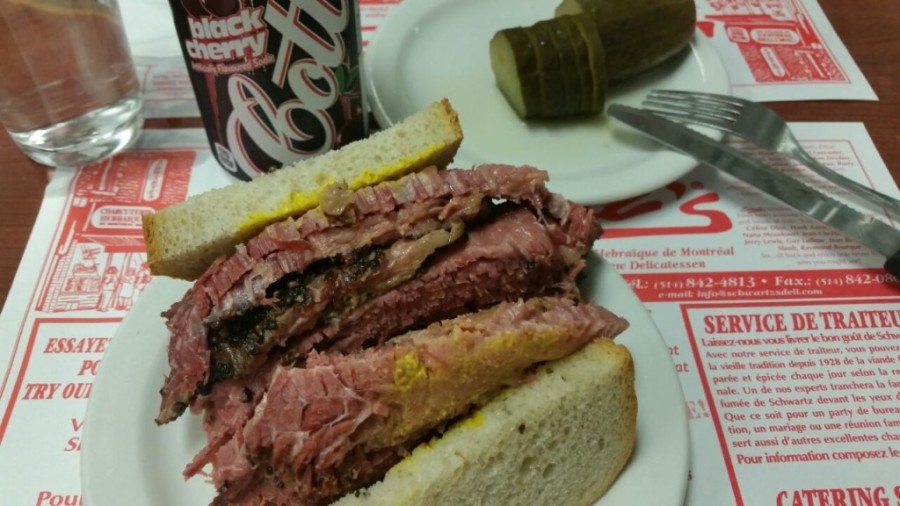 If you are someone that likes to take photos of their food, get your trigger finger ready and make sure you have a fully-charged battery. Simply said, in Montreal, there is delicious gluttony on every corner.

A few favourites include the infamous Schwartz’s smoked meat sandwiches that are part-owned by none other than Celine Dion. Line-ups are deep but move fairly quickly, and there is a take out window for those who are in a time crunch. Remember, locals call it smoked meat, not corned beef so don’t make that faux pas and stick out like a tourist. And please, do order a sandwich with a side of pickle and cherry soda.

There is also Joe Beef and Liverpool House that were featured on an episode of Anthony Bourdain’s Parts Unknown. The infamous dish would be the Lobster Spaghetti ($49) that comes with 1.5 pounds of lobster. Drool. 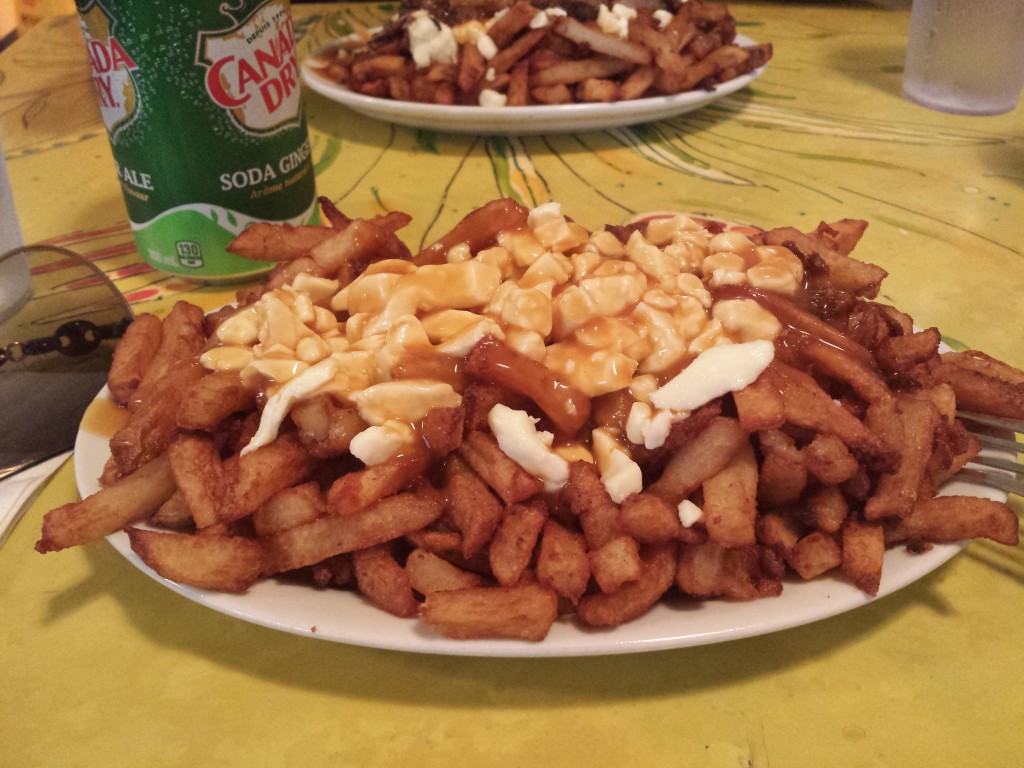 Lastly, poutine and Jewish bagels everywhere that are to die for.

Tip: Joe Beef and Liverpool House are owned by the same group and both feature the Lobster Spaghetti. They are both incredibly busy (Joe Beef more than Liverpool House) so be sure to make reservations well in advance. Some Yelpers say the book months in advance. 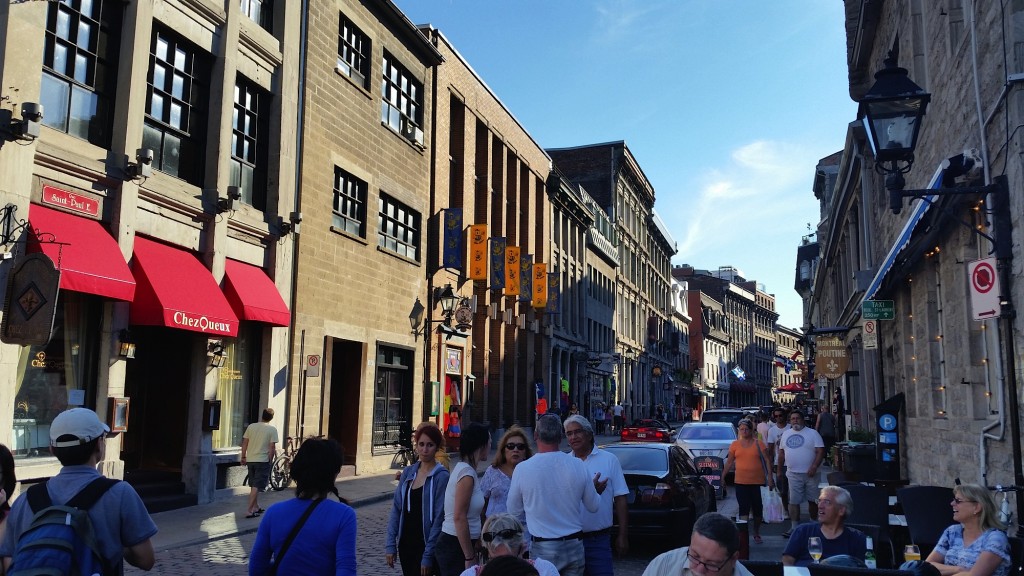 Take in a bit of culture, and stroll around Old Montreal where the architecture is so classically beautiful, it transports you to Europe. You’ll find a mix of historic architecture along the cobblestone streets. 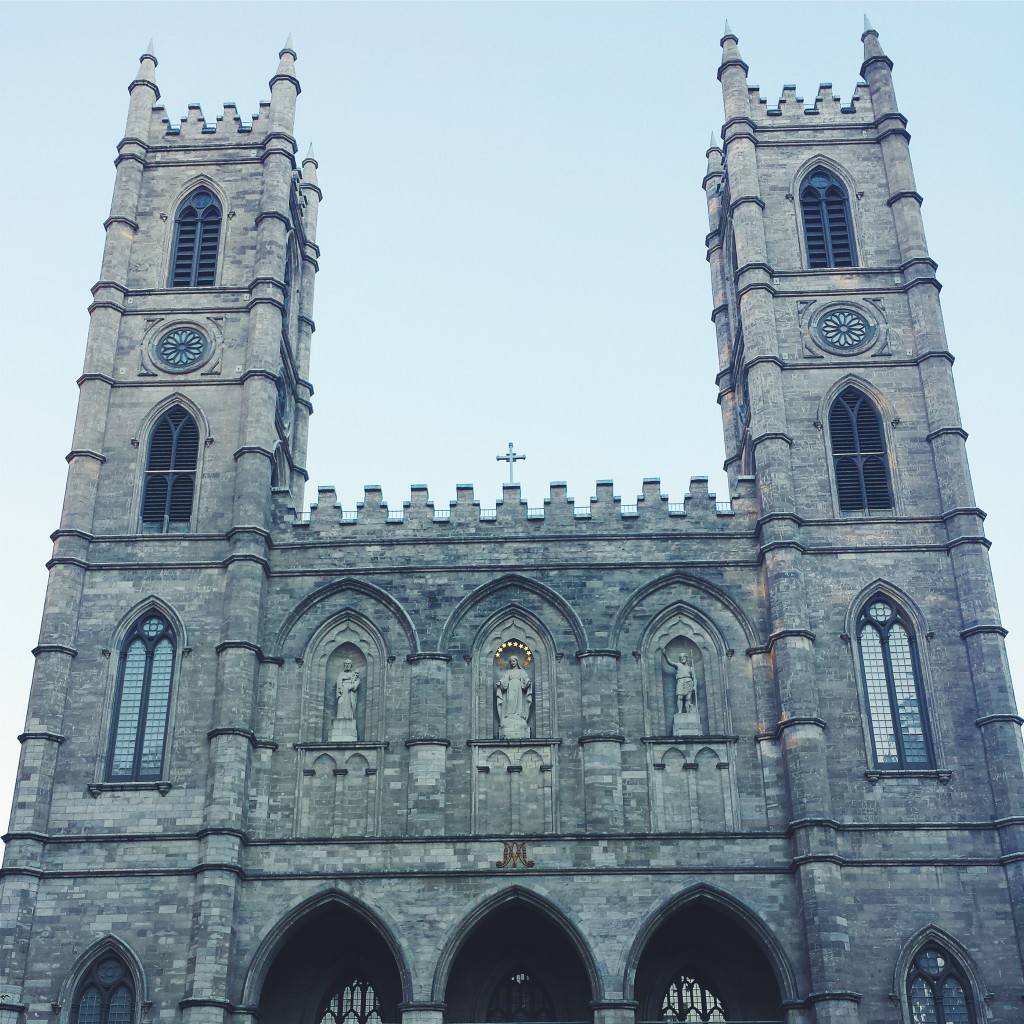 You’ll want to capture shots of Notre Dame Basilica (founded in 1642), located in Place d’Armes. Visit during the day for a clear look at the intricate stone work, or during the night where it is lit up with blue lights.

Old Port spans about two kilometers along the St. Lawrence River so plenty to see, eat and do along the stretch.

Tip: Check out Plage de l’Horloge, a man-made urban beach that has sand, beach chairs, showers and more that makes you feel like you’re in Paris. 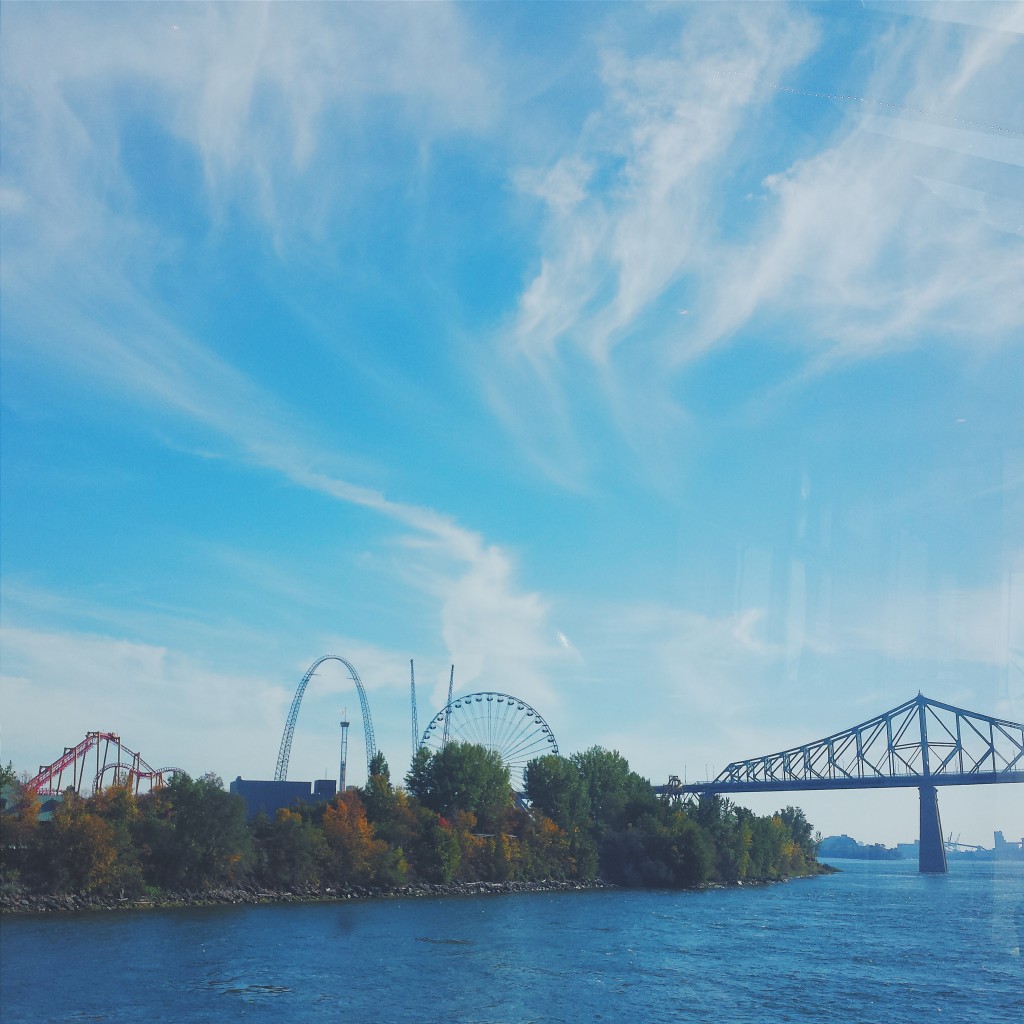 La Ronde is an amusement park that is located on an island. Yes, Saint Helen’s Island to be exact where thrill seekers can access the Six Flags park via the Jacques-Cartier Bridge. There you’ll find 40 rides including 10 coasters.

Tip: If you’re just looking to a drive-by look of the amusement park, you can take one of the sightseeing cruises offered by AML to get a good view. 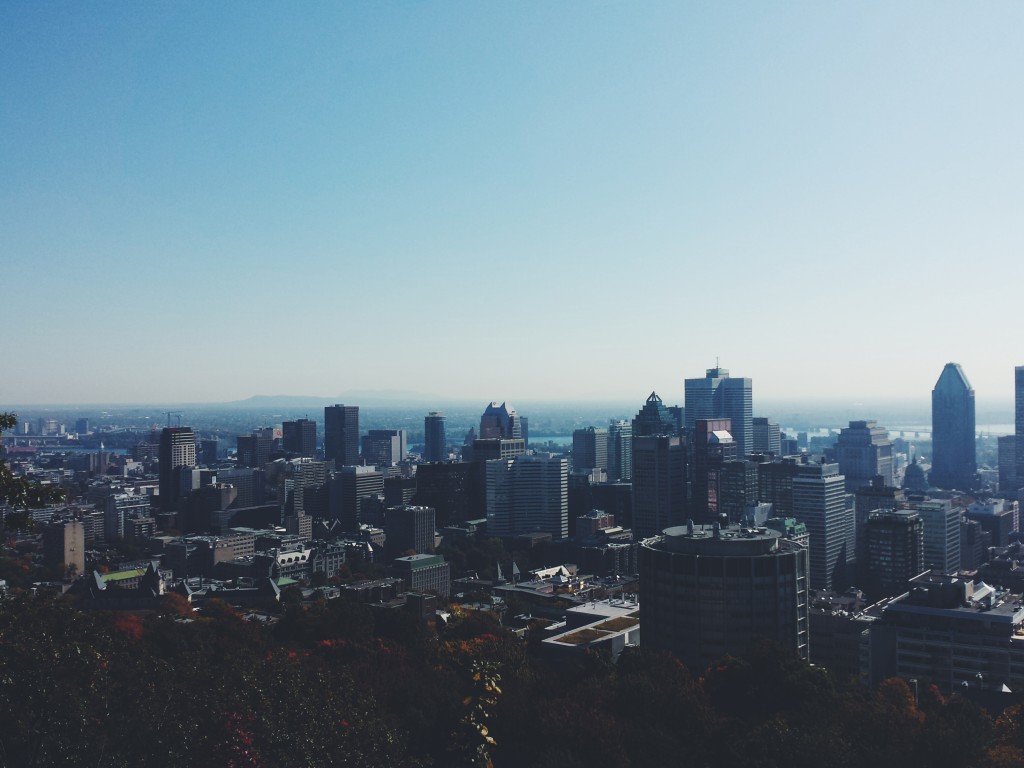 Mount Royal is one of Montreal’s crown jewels. It is what Stanley Park is to Vancouver, and what Central Part is to NYC. And rightfully so, as this 200-hectare park not only spans far and wide, but is also the highest peak in the city (234 metres).

All days of the week, you’ll find it bustling with locals and visitors jogging in the summer or cross-country skiing in the winter.

It’s also a very popular vantage point as the lookout faces directly over downtown toward the river, making it one of the best photo spots in the city.

Tip: If you’re visiting for the first time, take a map. Getting to the view point is a short trek (depending where you park) but the route is a bit complicated if you’re a first-timer. 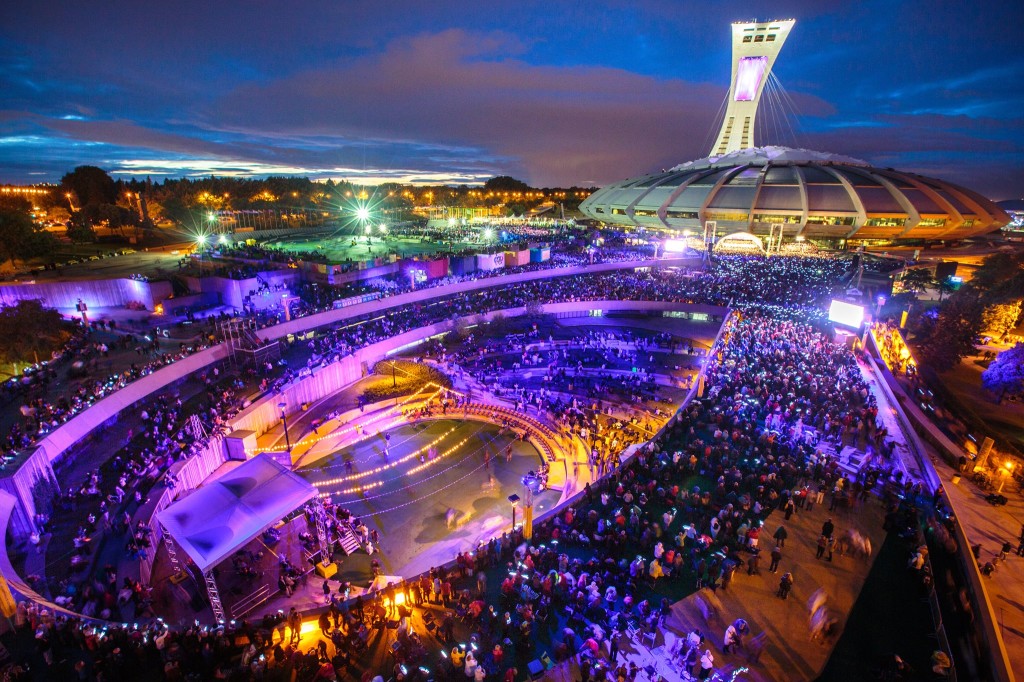 Nicknamed the Big O, this donut-shaped stadium is the most iconic building that was erected for the 1976 Olympics. Decades later, it is still the longest leaning tower in the world, which we got to admit is pretty neat.

At its peak, you get one of the best views of Montréal and the St. Lawrence Plains. Today, it is often used for concerts, shows, fairs and is often used by the Montreal Alouettes for sporting events.