Summer is here, and it’s definitely the best time of the year in Vancouver. There is so much going on every day, so get out there and soak up all the sunshine you can.

We’ve compiled a list for you to make the most of your summer: consider this your bucket list.

FREE things to do in the summer Vancouver 2015 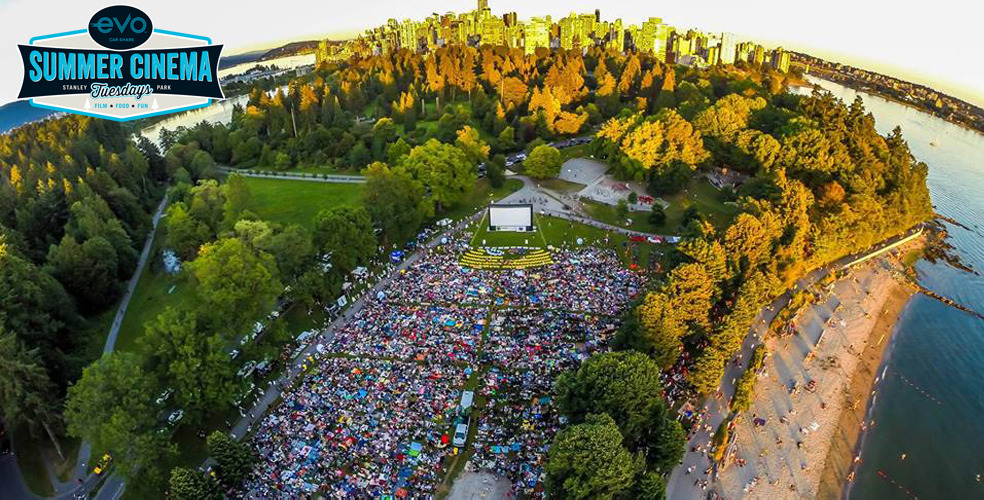 On average, more than 6,000 people attend the weekly outdoor movie night at Stanley Park, this year brought to you by Evo Car Share. The free outdoor movies return every Tuesday from July 7 to August 25.

Fireworks, bleacher seats, food, music and other performances and activities will also be back to add to the city’s largest and most anticipated summer festival.

Attracting crowds of more than 650,000, the annual Pride Parade is the city’s largest parade and is renowned on the international stage as on of the largest and most successful events in the world, in support of LGBTQ communities.

Western Canada’s largest Canada Day Celebration is a jam packed day filled with fun for the whole family and is capped off by an impressive Burrard Inlet Fireworks display.

For one day, the charming cobblestone streets of Gastown are transformed into one of the fastest, best-loved and most challenging cycling race courses in North America. This event is free for spectators and is guaranteed to be a fun afternoon/evening out.

You may think The Fair is overpriced and far too small for a metro region of 2.5 million, but it’s hard to say no when admission is free. Expect long lineups if the weather cooperates. Don’t say we didn’t warn you.

When: Tuesday, August 25
Time: 11 a.m. to 1 p.m. – FREE gate admission for all guests.
Cost: Re-entrance hand stamps will only be given after 1 p.m. Guests are welcome to re-enter the gates prior to 1 p.m. without hand stamp. 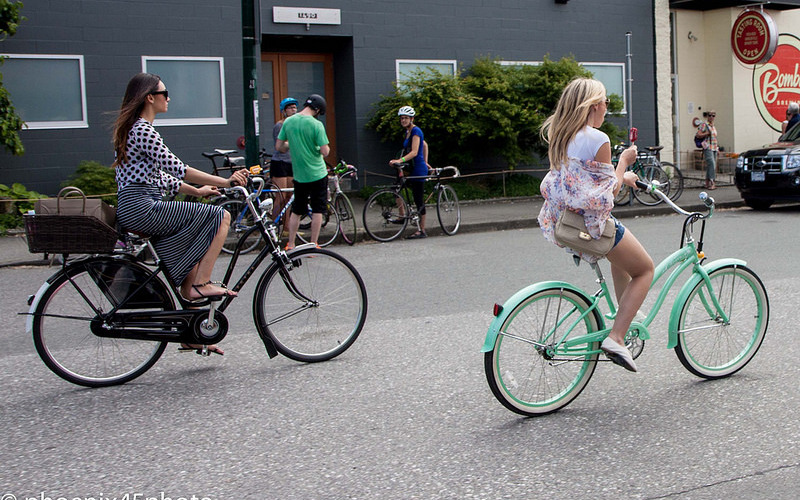 Farmers’ markets are a great way to spend a morning or afternoon in the city with people who love fresh food and festive gatherings. Since starting in 1995, Vancouver Farmers Markets have become plazas of fun, discovery and connecting. When you shop at them, you help keep B.C. farmers farming. Check out our guide to the numerous Farmers Markets around Metro Vancouver.

The one in Chinatown may be cancelled, but Surrey added their own and then there are still the returning three night markets – two in Richmond and one in North Vancouver. Plus this year there is also the Night Market at the Plaza of Nations. Check out our guide to Night Markets in Metro Vancouver.

Grab some gelato or ice cream

Vancouver is no slouch when it comes to great gelato spots. One of the world’s best gelato shops is right here in our fair city. You’ll find it and other shops in our best gelato/ice cream in Vancouver guide.

Hit up some of the great patios around the city

Enjoy a pint in the hot summer sun in one of the many great patios in the city. Check out our guide ultimate guide to patios in Vancouver.

Go on a Craft Beer Crawl in Vancouver’s Brewery District

The craft beer scene is in full swing in Vancouver with new breweries popping up every month. Grab your bike and go on a Craft Beer Bike Tour or hop on the Vancouver Brewery Tours and enjoy some of the great craft beer this city has to offer.

Brewery and the Beast Festival

The popular meat-centric event celebrates the best in whole animal cooking, using meat that is raised locally and ethically. Local chefs showcase their talent on the plate with tantalizing samples representing a vast array of meat preparations, including whole animal roasts, charcuterie, classic BBQ, traditional, ethnic, modern, and exotic dishes prepared from an assortment of conventional and rare cuts of protein.

The date for this year’s event has not been set yet, so stay tuned for that. Also as with every annual event around the world, the location is announced at the last minute. Last year over 2,000 people attend the annual white dinner party. Expect just as many this year.

Grab a brew at the PNE

The Fair at the PNE this year will feature a new and exciting area, the Craft Beer Festival. This licensed area will feature 20 local craft brewers each week for festival goers to sample a range of unique craft beers being developed in the Lower Mainland.

Every year on July 11 (get it 7/11) you can enjoy a free Slurpee from participating locations. 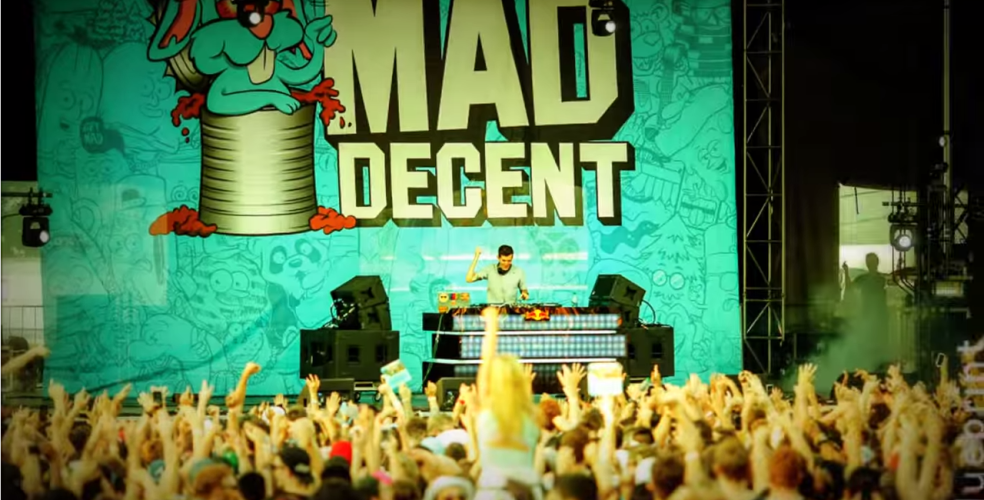 Arguably the biggest festival to hit the Metro Vancouver area this year: Drake, Sam Smith and Mumford & Sons will headline the annual music festival, which has solidified itself as the premier music festival in Western Canada.

Make the trek over to the sprawling suburb of Surrey for a two day festival you soon won’t forget. The Weeknd and Deadmau5 will headline what is arguably the biggest music festival to hit the valley. More information at Fvdedinthepark.com.

Once again, Blueprint and Live Nation are bringing the Mad Decent Block Party to Vancouver as Diplo and his crew return to bring the noise to the PNE Amphitheatre. It will be an all ages show with a VIP (19+) area as well. If you went last year you may want to invest the few extra dollars and get in the VIP.

Pemberton Music Festival is back again this year with a focus on a younger festival audience. Headliners include Kendrick Lamar, The Black Keys, J. Cole and Tiesto.

Over 150,000 people are expected to attend the city’s largest block party. West 4th in Kits will be shut down for a day of music, food, beer and lots more.

Play games or dance with Pride to the hottest DJs of the summer! This is now an all ages community focused event for Vancouver’s LGBTQ community, families, and allies. Come at 4 p.m. to participate in carnival games in two community blocks (Thurlow-Jervis), listen to music, and participate in games by donation hosted by community groups and local non-profits. Held in partnership with the West End BIA.

This year’s Summer Night Concerts feature an exciting array of artists that are sure to please fans of all genres. Pop stars, Country favourites, R&B icons, and Rock ‘N’ Roll legends, will all be showcased at the 2015 PNE Concert series. See the full schedule and lineup.

Check out the Vancouver Jazz Festival (June 18 to July 1)

Vancouver’s signature musical event of the year takes place from June 18 to July 1 with over 300 shows (free and ticketed) and 1,800 artists performing. For more information, visit www.coastaljazz.ca.

The party planned for last summer was blocked by the RCMP after over 7,000 people said they were attending via the Facebook event page. This year, the event page already has 22,000 people who plan on going. Will it go ahead?

The Vancouver Park Board has voted in favour of an inaugural Clean Up the Ocean Concert at Prospect Point in Stanley Park on July 4, featuring live DJs, bands and food.

The event will take place on Saturday, July 4 from 1 to 8 p.m. at the Prospect Point picnic area, with a capacity for 800 guests. 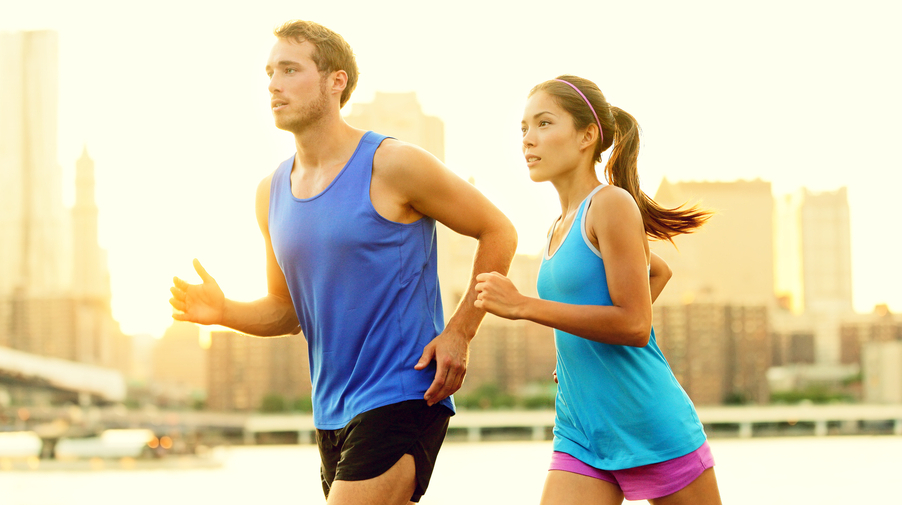 Go swimming at one of Vancouver’s Outdoor Pools

Run or bike ride along the seawall

Whether you rent or own, you have to do this route at least once. If you’re looking for another, be on the lookout for best biking routes in Vancouver article shortly.

Go for a hike

The Chief is one of the more popular hikes, but there are plenty of other hikes in Metro Vancouver for you to attempt. Slap on some sunscreen, get on your shorts and grab some water and prepare to take on mother nature.

Do the Grouse Grind

The Grouse Grind is one of those Vancouver things you have to try at least once in the summer. Attempt to beat your time or just make it to the top without stopping (unless a tourist gets in your way).

Spend a day at the Beach

Vancouver is known for our beautiful beaches. Whether it’s a grassy field, areas for water sports, or dog parks, each Vancouver beach has something slightly different to offer. Check out our guide to Vancouver Beaches.

There is an abundance of camping options within a short drive outside the city. Here’s a rundown of some of our favourite camping places within an hour or two’s drive of Vancouver.

The first slate of tickets for this summer’s massive 1,000-foot-long slip-and-slide in North Vancouver are now on sale.

The Slide the City attraction, approved by North Vancouver City Council in late-March, is scheduled to occur on Saturday, August 22 along Lonsdale Avenue from Victoria Park at Keith Road and ending down the hill at a splash pool on 3rd Street.

Get your outdoor yoga on at Dude Chilling Park

Vancouverites love yoga! Sign up at a local yoga studio and see what outdoor options they have. Also, the annual lululemon Seawheeze Half Marathon has a post-race Sunset Festival at Brockton Oval, where both runners and the general public are welcome to participate in a 10,000+ person yoga class.

Vancouver’s street art scene has evolved over the years. Take a tour through Gastown, Chinatown, Railtown and other East Vancouver neighbourhoods to find some amazing art.

Hang out at the ‘Porch Parade’ on Robson Street

The City of Vancouver’s VIVA cultural program has announced that ‘Porch Parade’ is the winning design for this summer’s temporary pedestrian plaza at the 800 block of Robson Street – between Howe and Hornby streets.

Random and weird events in Vancouver this summer 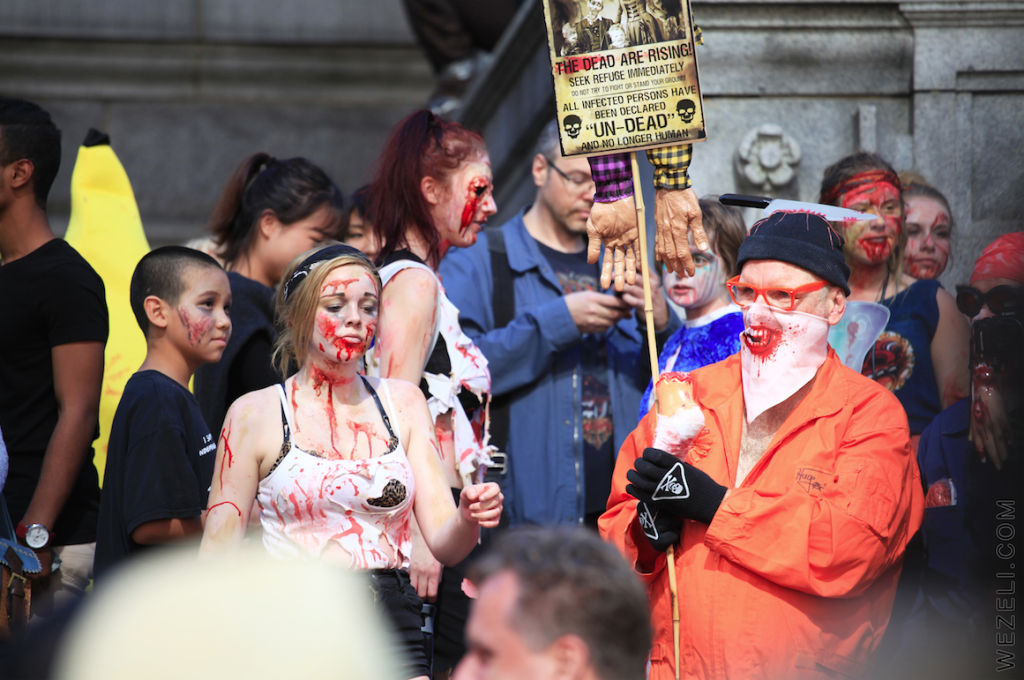 Join the Zombie Apocolypse at the Annual Vancouver Zombie Walk

The date for the 2015 Zombiewalk has been pushed back three weeks to September 5 to shift it away from peak tourist season, to cut down on the overload of tourist photographers who have grown hugely in size of the last few Zombie walks.

The annual event draws hundreds of participants ready to get wet. Make sure you follow the code of conduct, which can be viewed here.

Go Topless, Why Not?

Whether it be at Wreck Beach or you want to bare it all on annual go topless day, why not let loose and let it all hang out. Go Topless Day is a 24-hour period where ladies are encouraged to show their breasts as a protest against hypocritical laws that allow guys to walk around shirtless while women must remain clothed.

Vancouver’s favourite annual glowtastic mobile dance party on wheels, Bike Rave will once again be going down. The date has yet to be announced.

The run is a 5 km circular course and will be an officially-timed event. This will be the fifth year the race is offering the option of team participation, but a minimum of three bare bun runners is required. For those unable to run, the event is also open to walkers and families in the “Slowpoke” category.

The run takes place on August 15.