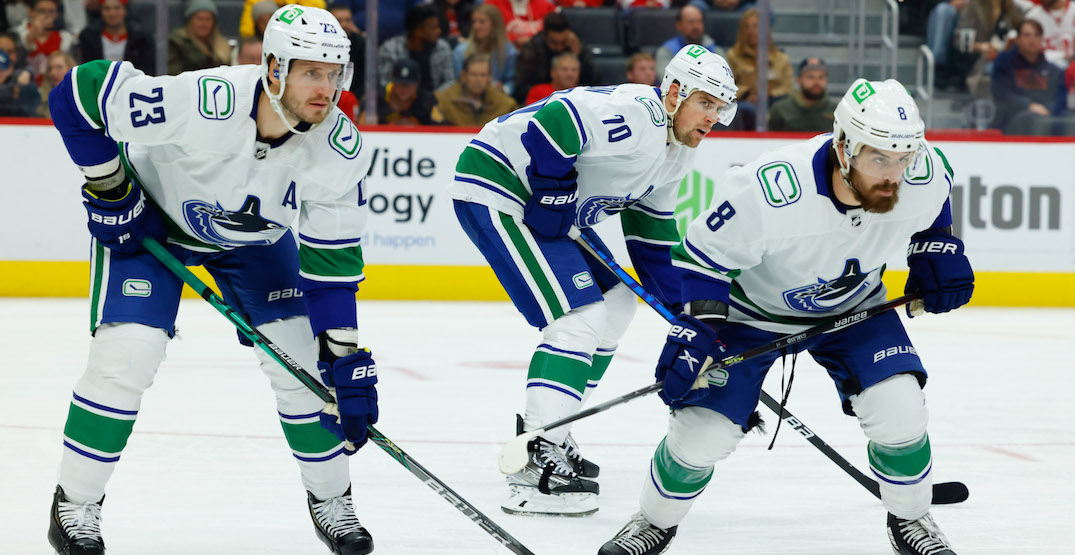 What a difference one game makes.

Heading into Tuesday night’s game in Buffalo, the Vancouver Canucks were in a pretty good spot.

They secured three of a possible four points in their first two games, which included a third period comeback to force overtime in Edmonton. They lost in regulation in Detroit, which sounds bad on the surface, but it was a game they deserved to win.

But following up that loss to the Red Wings with an uninspiring defeat to the Sabres changed the narrative. Now all of a sudden the Canucks are a team that has just one win in four games, including back-to-back losses to two of the worst teams in the NHL.

It was a game in which Travis Green said his players didn’t “pay a big enough price to win,” which is just about the harshest public criticism you’ll hear from the Canucks coach.

While the games in preseason don’t mean anything in terms of wins and losses, they are important for building chemistry heading into games that matter.

Unfortunately, not much was accomplished in the preseason, at least concerning the team’s forward lines.

None of the lines that started on opening night were used together in the preseason. Now, some of that is due to Elias Pettersson joining the team late, and Juho Lammikko being acquired in a trade.

But J.T. Miller played all of the preseason at centre, then started on the wing. Conor Garland bounced around throughout preseason but never played on Bo Horvat’s line. That’s where he started on opening night.

Through the first four games of the season, Green still seems like he’s experimenting — with moves like putting Alex Chiasson on the first line and shuffling Miller between first-line left-wing and third-line centre.

Some of that is to be expected, but more needed to happen during exhibition games to give the team a leg up.

It’s still early, but the returns have been brutal so far with regards to Canucks centres in the faceoff circle.

The Canucks have the worst faceoff percentage in the NHL at 41.4%, and none of the five players who take draws regularly are above 50%.

This is an area where losing Jay Beagle (trade) and Brandon Sutter (injury) hurts the team, as the Canucks had been the second-best team in faceoff percentage over the past two seasons.

Horvat (48.9%) is the only Canucks centre with a decent percentage so far. Everyone else is under 40%, which includes Pettersson (28.1%), Miller (39.5%), Jason Dickinson (37.1%), and Lammikko (35.7%). Part of the problem is they don’t have a right-shot centre available, meaning that all draws taken on the right side of the ice are on their centres’ weak sides.

Analytics experts have made the argument that faceoffs are overrated, but going from one of the best to one of the worst is noteworthy.

3. Demko hasn’t been the problem

It’s easy to forget that this is the first season that Thatcher Demko has entered as the Canucks’ unquestioned No. 1 goalie.

Demko’s .910 save percentage doesn’t tell the whole story. The 25-year-old has looked the part of a top goalie. He’s the least of their worries.

He’s under contract for five more years beyond this season, so I’ll stop short of calling the trade a “win,” but in the here and now, Oliver Ekman-Larsson has been a positive addition to the blue line.

So has the other key addition from in trade with Arizona, Conor Garland — though there weren’t any red flags surrounding his addition.

Ekman-Larsson is averaging 24:53 per game, which is the second-most minutes on the Canucks, behind only Quinn Hughes. Hughes is the only defenceman he trails in Corsi-for percentage on the Canucks, too (53.72%).

Paired with Tyler Myers, he has played against tough competition and hasn’t looked like a player that fans should be worried about. At least not this season.

The season is young, but this doesn’t look like the defenceman version of Loui Eriksson that some were worried about.

5. Their defence is paper-thin

The Canucks’ top four has held up better than many probably would have expected, and Kyle Burroughs has been a nice surprise.

The problem? Particularly with Travis Hamonic missing, there’s no margin for error when a player gets hurt.

With Hughes out of the lineup on Tuesday, Brad Hunt was elevated into a top-four role with Myers and it went about as well as you’d expect. That terrible twosome was on the ice for three of Buffalo’s four five-on-five goals.

The Canucks can’t afford any injuries to their top four, and that’s a big problem.

6. Höglander has taken another step

Let’s end on a positive note, shall we? Nils Höglander looked like he had taken another step during the preseason, and that feeling has been confirmed watching him through the team’s first four games.

The Swedish winger is a Swiss army knife of sorts for Green, who said that he can “kickstart a lot of lines.” He’s not very big, listed at 5-foot-9, but he’s a highly skilled puck hound that’s tough to knock off the puck once he gets it.