Bizarre. Freaky. Spellbinding. These are just a few words you could use to describe “The Dark Fantastic.”

The show begins in the desert, with three people driving to nowhere in particular. There is a car crash. But who are these people and why are they here? This is the story that gradually unfolds over the course of a completely enthralling hour.

Accompanied by a musical score, the audience journeys to a solitary house in the middle of the desert where they are told the tale of an old man, the woman he loves, and her son, a boy who has two hearts. The story moves forward and backward through time, from a car crash in a barren landscape to a jammed photocopier in a hastily constructed city, bringing together three disparate characters (the audience being one of them) in a world that is as fantastical as it is mundane, and as terrifying as it is alive with wonder. 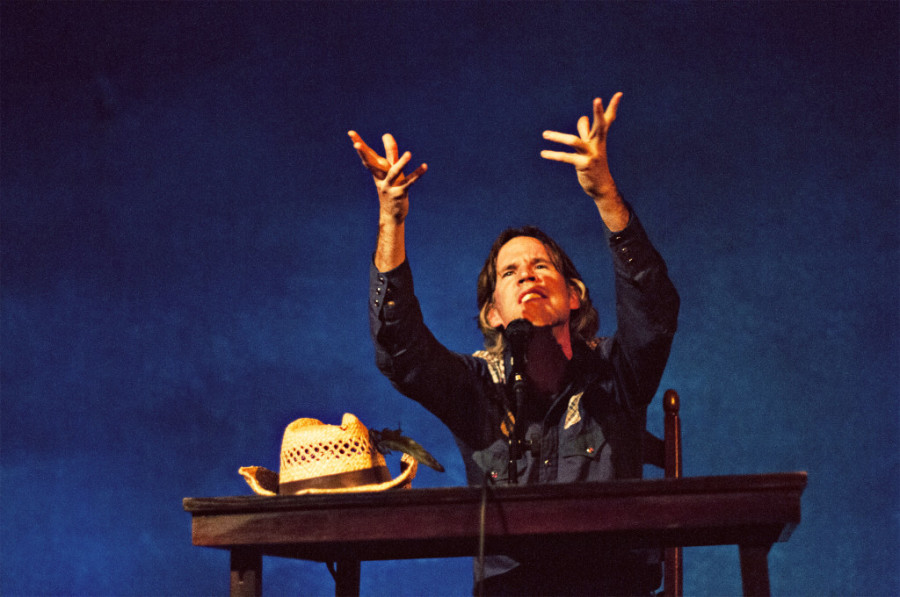 Playwright and performer Martin Dockery has created a bizarre and completely unique set of characters and circumstances to inhabit the world of “The Dark Fantastic”, from a horde of barbarians to a man that creates artwork in the absolute strangest way imaginable.

Martin’s performance is mesmerizing. His poetic and lyrical script is music to the ears, it is surely one of the best scripts I have heard in quite a long time. His performance has such a quality that as the story unfolds it feels like he is creating it right in that moment, just for you. He has the audience in the palm of his hand and hanging on his every word.

Forget every preconception you have about this show; it will continually surprise and amaze you. I can guarantee it is unlike anything you’ve seen before.

The Dark Fantastic plays at The Waterfront Theatre as part of the Vancouver Fringe Festival. Remaining show dates are:

Find more information and tickets on www.vancouverfringe.com. Find out more about Martin Dockery on his website www.martindockery.com.