Broadway hit The Motherf**ker with the Hat, A Firehall Arts Centre production in association with newly-formed Haberdashery Theatre Co., saw its Vancouver premiere last week. With a title like that, you’d better be willing to lay it all down the line. And while opening night saw some high points for the newly-minted Haberdashery, there was not nearly enough to own up to the expectations inherent with the show’s title.

Motherf**ker comes from the mind of Pulitzer Prize winner Stephen Adly Guirgis, renowned for fare like Between Riverside and Crazy and The Last Days of Judas Iscariot. This 2011 entry is centered around freshly released ex-addict Jackie (Stephen Lobo), who tries to keep out of trouble with the help of his sponsor Ralph D (John Cassini) and still-using girlfriend Veronica (Kyra Zagorsky). As expected, tranquillity is hardly the point of the play, and Jackie soon finds himself investigating Veronica’s indiscretions in a web of intrigues that includes Ralph’s wife Victoria (Lori Triolo) and his own cousin Julio (Francisco Trujillo). Our hot-headed protagonist rampages around town to discover the identity of that mofo, whose pimp-like hat is found left behind in Victoria’s apartment… along with the unmistakable odours of lubricant and d*ck in the sheets.

Motherf**ker isn’t meant to be polite or subtle, which is a welcome change for too-nice Vancouver. The dialogue flows fast, with two to three actors sparring back and forth in heated exchanges. The players gamely toss out joke after joke, but the audience was only in stitches perhaps half the time. I think the main problem is that leading man Stephen Lobo can’t keep up with the intensity the rest of the cast, and the imbalance undos the forward momentum that the play needs in order to make sense. 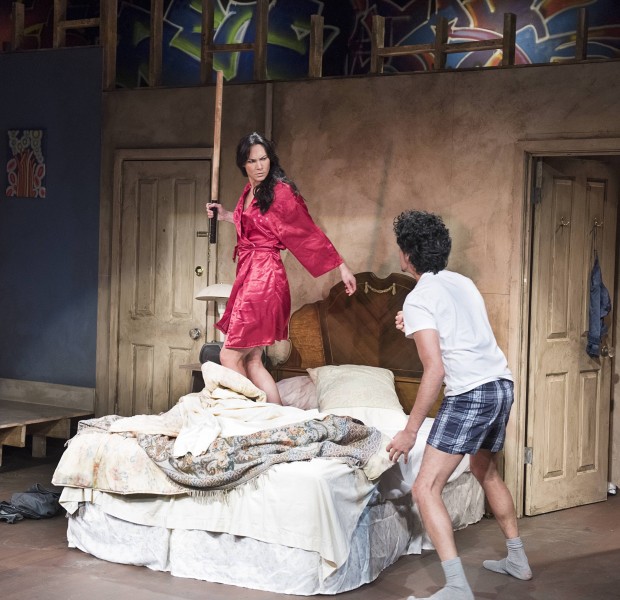 Lobo can’t match the strong presence of the two women of the show: Zagorsky’s feral rawness of passionate lovers gone to war, or Triolo’s perfect timing that elevates everyone’s game whenever she’s on stage. John Cassini’s faux-bodybuilder lines should be comedic gold, but the noted TV and film actor’s delivery isn’t always believable – telling especially when his curses don’t trip off the tongue as fluidly as the others. Francisco Trujillo, on the other hand, plays the gay machismo cousin past stereotype, garnering easy laughs with a knowing glint in his eye. 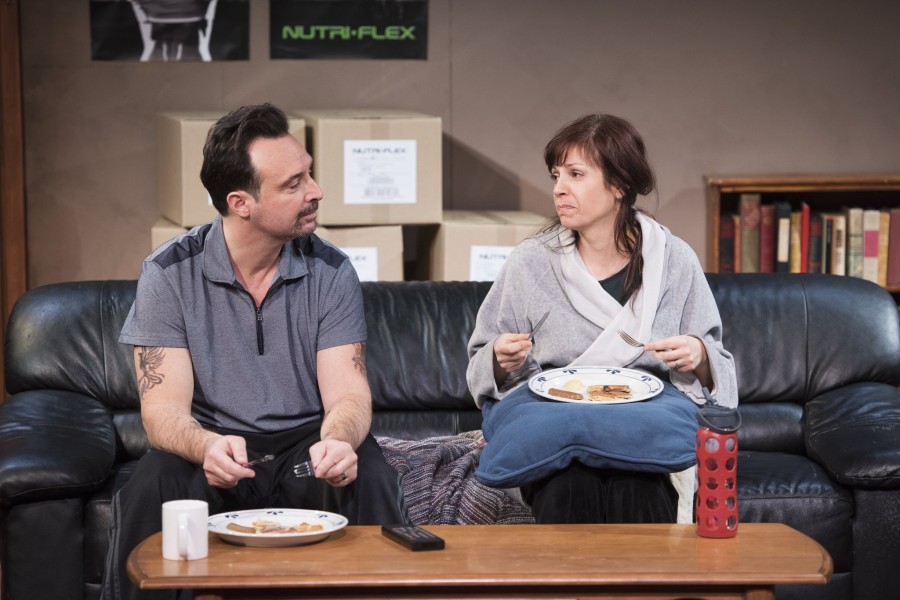 It’s a faithful production that feels a bit safe, especially when compared to the very real grittiness of Chinatown right outside of the Firehall’s doors. An on-stage drummer (Eric Banerd) makes scene transitions less of a chore, but the energy contained in the frantic beats aren’t always matched by the scenes that follow. The sets are absolutely beautiful and worthy of a mainstage production with the best of them; set designer Lauchlin Johnston’s three settings are full of details and visuals reminiscent of the wrong side of the Big Apple. Haberdashery’s inaugural play ruthlessly distinguishes the standouts from the rest, and boldly clocking in at 90 minutes without intermission, total demand of our attention is nothing short of essential.

I’m left feeling mixed about Motherf**ker. Compared to a fair number of plays gracing larger theatre stages, certainly, Motherf**ker can be seen as a fresh, youthful alternative to tried and tired classics. But compared to other ‘edgy’ independent productions already on offer, Motherf**ker stands up only as light-hearted entertainment with a few more curse words mixed in. Still, the promise of a serious contender to Vancouver’s stagnant ‘large’ theatre scene is a tantalizing prospect, and I’m looking forward to seeing what this group of talented veterans come up with next.

The Motherf**ker with the Hat runs at the Firehall Arts Centre until January 30. More information here.