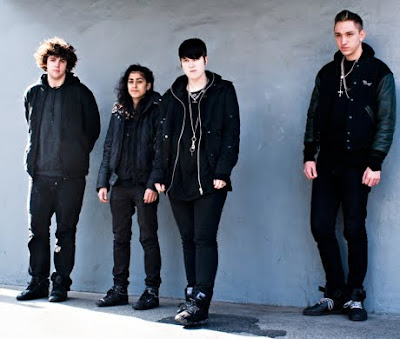 Imagine two kids growing up in England, friends since kindergarten, confided in each other with every last thing and finally when they became brave enough to sing to one another from under a set of bed sheets they realized music was what they wanted to do so that’s just what they did. With a couple other kids they met when they were 11 they formed “the xx” described as “dream pop” they have that calm, cool sound of Portishead with a slight element of R and B. The xx were basically on every single best of 2009 list and if it wasn’t, you bet there were more than a few letters to the editor (may or may not have sent some myself).

Their debut self titled album “xx” caught almost everyone off guard, full of dreamy songs and the mix of male and female vocals there’s a little something for everybody from these 19 year old kids out of London. You may have noticed one of their songs being featured on an Olympic commercial for Apolo Ohno during the NBC coverage of the 2010 games and their single “Crystalised” has basically made it on every other hit TV drama.

Doing the typical summer festival circuit including appearances at Sasquatch, Coachella, Bonnaroo and Lollapalooza they are making a one off stop with Swedish band “jj” (weird hey) at the Commodore Ballroom on April 13th. I wish I could tell you to go get tickets but unfortunately it’s already sold out, that alone shows what kind of impact these kids have made on the music scene. The only thing you can really do is hope that Ticketmaster releases some last minute tickets or try your luck on craigslist (a quick look shows that prices are fairly reasonable for second hand)

In the meantime if you don’t get to see them live don’t worry… they’re only 19 and if future albums are anything like their debut, they will be around for a long long time.

Note: The following was written by our musical correspondent Mpah.