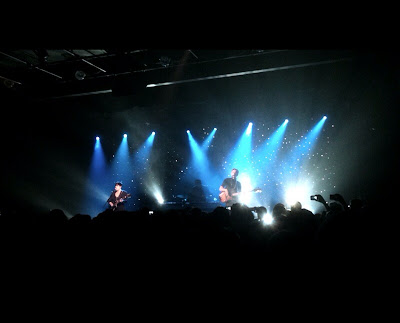 The xx, one of the most hyped bands of 2009 and coming in to 2010 will be touring all over the world in support of their massively successful debut self titled album and last night they came in to Vancouver to play the Commodore Ballroom. I personally love their album and couldn’t wait for this show to come when I purchased tickets 4 months prior but I was left feeling a little less enthused than I had thought I would be.
I wish I could rave about how great the show was but I feel I need to be honest, the show was good, the band kicked it off perfectly with nothing but their silhouettes visible behind a giant white sheet playing the song “Intro” which looked like a music video coming to life right in front of your eyes, from there they kind of went through the motions of playing all the songs from their album and they sounded fantastic there was no doubt about that, sharing vocals between the two lead singers was spot on and the songs really came across well live. These kids are so young though that it almost seems they skipped a step in becoming a successful band, rather than playing smaller venues or doing opening gigs this London band has catapulted in to its own headlining tour which seemed to scare them a bit on stage and it showed. At times looking like a high school talent show band just trying to get through the songs without screwing up was the vibe I got from their faces and mannerism on stage.
This only slightly deterred me from witnessing what was overall a great concert, the band playing their big hits “VCR” and “Crystalised” having the crowd soaking it all in and singing back at them like they’ve been listening to them for 5 years. Once the xx seemed to become a bit more comfortable on stage near the end of the show they performed an amazing version of “Infinity” to end the first set – then coming back out with the stage looking like a sky you’d see out camping; full of stars and they did that very song “Stars” which was a great way to end a relatively good night… but I just cant shake the feeling that this band has a little growing up to do in order to really give a top notch 10/10 show. For me they are just too young, too new and are not quite on that platform yet. Something was missing and I hope in the next few years they find it because they have potential to be a fantastic atmospheric indie-pop band comparable in my mind to the great Portishead.
Random note: the opening band jj has to be one of the worst acts I’ve ever witnessed – it reminded me of something I would see out on Granville street (but worse), the singer who seemed more drunk than I was playing with a back track that wasn’t even good, no real instruments being played and her band mate who later joined her seemed to be more interested with kissing and making out with her than playing any real music. They didn’t really seem to care much about what they were doing and what they were doing was pretty awful and really left me feeling sour, I’m sure I’m not the only one…
If you were there, please share your thoughts and pictures from the show!
Set list (from memory some songs may be out of place)
Intro
Crystalised
Islands
Heart Skipped a Beat
Fantasy
Shelter
VCR
Do You Mind (Kyla Cover)
Basic Space
Night time
Infinity
Stars
VancityBuzz.com