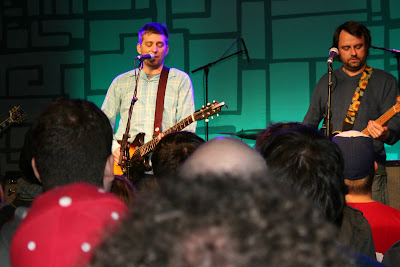 I feel sorry for anyone who missed the Weakerthans last night at Livecity Downtown, not only did the Winnipeg rockers sound near perfect (minus a humble John K Samson lyrical mix up) but it was FREE. Not often will you get to see a show of that caliber for that price, our friends in Toronto are paying 44 dollars a ticket to see them 😉

The Weakerthans came on to a rather quiet applause which I blame to there being a sledge hockey game on just before and boring everyone nearly to death, the applause rose through out the show and by the end of the night everyone was screaming for more.
Unfortunately they couldn’t play all night but what they fit in to about an 80 minute set were hits from old and new including Civil Twilight written about a Winnipeg transit driver, Plea From A Cat Named Virtute giving all cat enthusiasts a look in to what their cat actually thinks about their drinking and TV habits and the highlight of the night Aside which got everyone moving on the dance floor. The brass section sounded sharp the drums sounded fierce causing a good rumble in the floor beneath and the always smiling, always gracious John K Samson sounded perfect all night.

In between sips of wine and joking about the selection or lack there of, of beverages the singer was very interactive with the crowd and even gave us a rarely heard almost hymn-like “Elegy for Gump Worsely” paying tribute to the late goaltender from the NHL and cheers’d with the crowd to thank them, him and everything about Vancouver and the games. On top of the stellar performance from the band it never fails to enjoy a show more because you know they are enjoying themselves as much if not more than the crowd, this was obvious with the non-stop smiling, joking about an ice cold trumpet and a great guitar solo given by John K Samson who admittedly never does solos and had fun goofing around while playing it in the song Utilities. They don’t have much for tour plans this year but if you do happen to catch them at a folk fest or John K Samson on his acoustic solo tour, do not miss out, I doubt you will get in at the price we were lucky enough to, but what ever the cost trust me…it’s worth it.

Pamphleteer
Confessions of a Futon Revolutionist

Note: The following review was submitted by our musical correspondent MPAH. You may follow him on twitter @MPAH