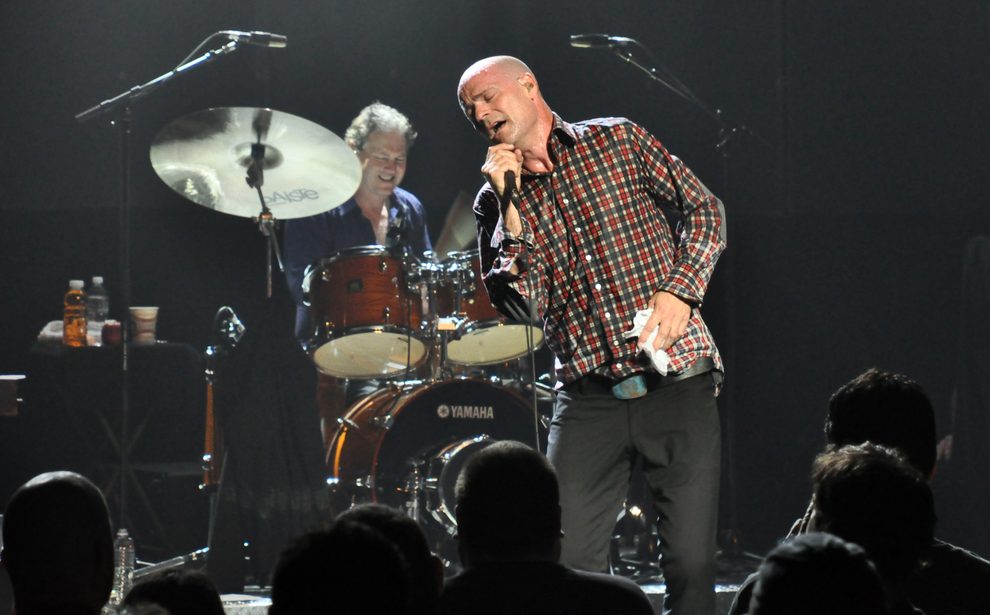 Written for Daily Hive by Jordan Wade. Keep up with him @waderadio.

This Canada Day, the Tragically Hip are gearing up for what will likely be their last tour, after the devastating news of Gord Downie’s terminal cancer shocked the nation last month.

For 30 years the five-piece rock band from Kingston Ontario, led by the brilliant lyrics of Downey, have developed a cult-like following and been lauded as one of our countries most national-pride inducing bands.  This begs the question what gives Canadians our national pride?

If the answer is: hockey, our landmarks, our communities, our history, hockey, our heroes, our values, our stories, and more hockey…. Well then, the Hip, as their popularly known, fit the bill perfectly.

With dozens of hit singles, 13 studio albums and 14 Juno Awards under their belt, the Hip will be hitting the road one last time for 15 Canadian dates this summer.  On Canada Day 2016 what better way to celebrate our “Most Canadian band” then by sharing our Tragically Hip top 10 Canada Day classics and the stories behind the songs.

This song was originally titled “Bobby Orr” but later changed to “Fireworks” in reference to falling in love for the first time told through the eyes of a hockey-loving kid who is finally pulled away from the national pastime and the grip on his boyhood hero with this new found sensation called love.

Key Line If there’s a goal that everyone remembers it was back in ol ‘72. We all squeezed the stick and we all pulled the trigger and all I remember was sitting beside you.

This song tells the true story of Winnipegger David Milgaard who was wrongly convicted of a Saskatoon murder in 1970 and spent the next 23 years of his life in prison.

This is the intriguing story of Bill Barilko, the Toronto Maple Leafs defenseman who scored the Stanley Cup winning goal in overtime in 1951 before disappearing on a fishing trip in northern Ontario.   For 11 years he remained a mystery until his remains were found in 1962 – Ironically the same year that the Leafs won their next Stanley Cup.

Key Line: The Last goal he ever scored won the Leafs the Cup.  They didn’t win another till 1962 the year was discovered.”

With this catchy ballad about a small Ontario town, the Hip literally put Bobcaygeon on the national map.  The Bobcaygeon Chamber of Commerce reported a huge increase in tourism since its 1998 release, including car loads of Hip fans that will pull up at the welcome sign and snap photos.

Key Line:  That night in Toronto, with its checkerboard floors, riding on horseback and keeping order restored. Till The Men They Couldn’t Hang stepped to the mic and sang, and their voices rang with that aryan twang.

As the parentheses indicate this song was a tribute to the famous Canadian author and academic Hugh Maclennan.  A direct reference to his novel The Watch That Ends the Night can be heard in the lyrics in the third verse;

Key line:  There’s no simple explanation for anything important any of us do, and the human tragedy consists in the necessity of living with the consequences, under pressure under pressure.

At the Hundredth Meridian – From the album Fully Completely, 1992

The 100th meridian is a line of longitude that runs through Manitoba and separates much of Western Canada from the Central and Atlantic regions and is where the great plains begin, as Downie states in the song.  The song was also featured in the 90’s Canadian TV series Due South starring Paul Gross as a Mountie.

Key line:  Driving down a corduroy road, weeds standing shoulder high. Ferris wheel is rusting off in the distance.  At the hundredth meridian.

Thompson Girl was never released as a single but has become a bit of cult classic in recent years about Thompson, Manitoba; a small town of about 12,000 known as the “hub of the north” complete with polar bears, nickel stacks and long walks to the nearby (only 400 km away) town of Churchill

Key Line:  It looks like Christmas at 55 degrees, this latitude weakens my knees.

The Lonely End of the Rink – From World Container, 2006

Downie played goalie as a kid and wrote this song as a thank you to his father for being there at the lonely end of the hockey rink with him, cheering him on from the stands, even when all of the action was at the other end of the ice.

Key line  I hear your voice across a frozen lake. A voice from the end of a leaf.  Saying “You won’t die of a thousand fakes or be beaten by the sweetest of dekes”

Something On – From the album Phantom Power, 1998

This song is about the Great Ice Storm of 1998 which crippled much of Southern Quebec and Eastern Ontario.  It caused 30 deaths and massive damage all over the area, leading to widespread long-term power outages and the largest deployment of Canadian military personnel (15,000 troops) since the Korean War,

Key line: Outside there’s hectic action. The Ice is covering the trees, and one of them’s its interconnecting with my Chevrolet Caprice.”

The Darkest One plays on themes of isolation and cold, Canadian winters.  The music video features Don Cherry, the Trailor Park Boys and the Hip all playing caricatures of themselves on a dark winter’s night… How’s that for a good ol’ slice of Canadiana!