The Mountaintop is a one-act play about the final night of Dr. Martin Luther King, Jr.’s life. The 90-minute production takes place in room 306 of the Lorraine Hotel, in the middle of the night, during a thunderstorm. King, struggling to write the next day’s speech, orders a cup of coffee from room service. The tone is tense, rain pounds outside, with slowly approaching rumbles of thunder. There is a knock on the door, and behind it is coffee and company.

There are laughs to be had, the jokes in the play are very funny. But the mood is never kept too light. Once a certain point of levity is reached, there is a flash and a deafening boom. Thunder like gunfire, and down Dr. King goes, covering his head protectively.  As the play progresses at the tone gets less and less humorous, the implied threat of the weather does not fade, but what’s going on outside does not feel as important was what’s going on inside the hotel room. 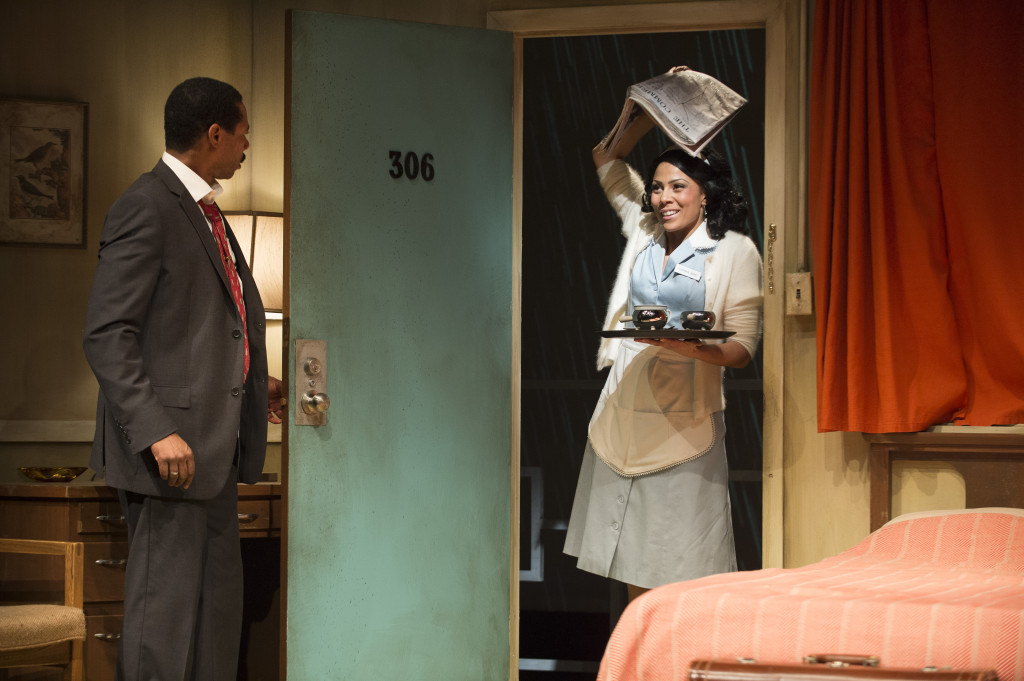 Dion Johnstone plays an excellent Dr. Martin Luther King, Jr. At once charismatic and powerful but also fragile and simply human. Crystal Balint is utterly charming as Camae (short for Carrie Mae) the maid. The character is impish and completely delightful, her humour is radiant, bringing cheer to the the grim motel room. While both actors are skilled, Balint is the clear star. Camae draw attention and powers over thunder, she is down to Earth and comforting. She is the kind of girl that seems like she would be easy to make friends with, but she won’t let anyone get away with any kind nonsense.

Most striking, however were the rainstorm visual and audio effects. They were so realistic and effective that it was a genuine surprise to leave the theatre and find that it was clear out.

The Mountaintop will be playing at the Arts Club Granville Island Stage until March 14th.