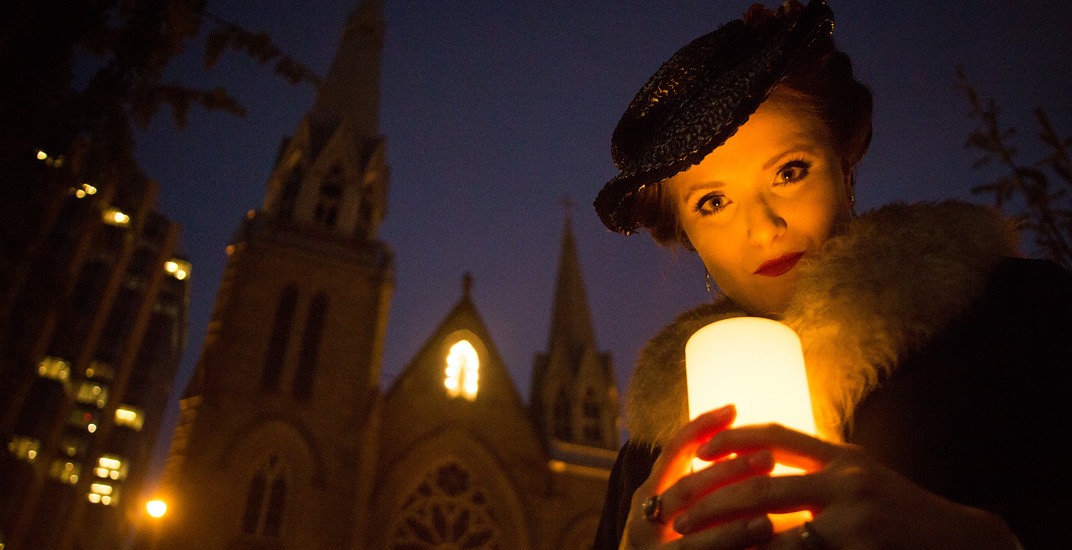 Gastown in the 1880s was a ramshackle outpost on the edge of a vast continent – its residents menaced by smallpox and ravaged by fire. For many years there wasn’t even a city cemetery to bury the dead.

This Halloween season you can step into the dark history of Vancouver’s earliest years on the Lost Souls of Gastown tour.

From the tragic story of the “woman in the well” to the gruesome murder of gold prospector John Bray, the Lost Souls of Gastown weaves a tale through backstreets and alleyways to a dramatic finale in historic Maple Tree Square.

Now in its sixth straight year, the Lost Souls of Gastown was created and written by Will Woods, the founder of Forbidden Vancouver Walking Tours.

“The idea was to take this dark early history of our city and weave it into a story. You are right there with an imagined resident of old Vancouver – someone who escaped the Great Fire while it licked the skin off their back,” says Woods.

“Every story is based on documented accounts from our city’s earliest years – you’re re-living this gothic history with a compelling storyteller as your guide.”

The Lost Souls of Gastown doesn’t frighten guests with cheap scares and it’s not a ghost tour or a paranormal tour. It’s a gothic theatre adventure that roams the backstreets and alleyways of Victorian Gastown.

Each experience is led by one of Forbidden Vancouver’s cast of professional actors. You’ll either hear the story of George Turle or Sarah Briars – each a character from 19th century Gastown.

This Halloween season, George Turle is played by one of Corwin Ferguson, Rowan Jang, or Will Woods. Sarah Briars is played by either Nevada Yates-Robart or Janet Glassford.

The Lost Souls of Gastown 2017

Where: Meeting point at Cathedral Square, at Dunsmuir and Richards, tour ends at Maple Tree Square, Gastown in Vancouver