Think of it like a stretched out supercharged doughnut: The Chimney Cake is a traditional baked good from Hungarian-speaking countries, and there is an entire shop dedicated to them in Vancouver.

Called  The Kürtősh, the Kerrisdale bakery makes these totally tubular treats in a variety of flavours.

Chimney cakes are made of a raised (yeasted) dough twisted around a stick, coated with sugar, and are butter-basted while roasting on a spit. 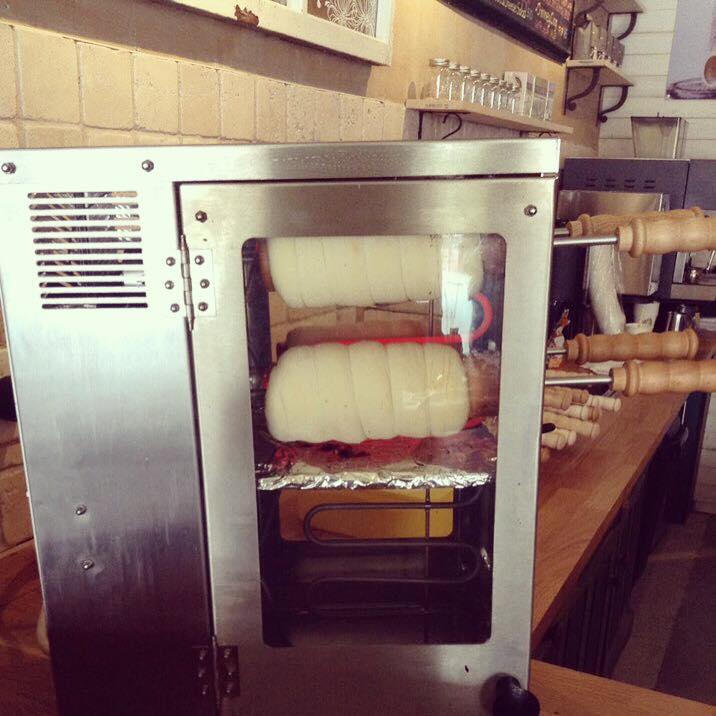 Vancouverites in the know may already have tried Chimney Cakes at Transylvanian Traditions, a bakery that includes Kürtőskalács in their repertoire of specialities, however now The Kürtősh offers the chance to head to a place where that’s all they do.

“Our cafe menus are all based on Chimney Cakes which originate from Transylvania. Chimneys (known as Kurtoskalacs in Hungarian) are delicious and unique, bread-like freshly baked Eastern European pastries, named after their hollow shape. And they have a crunch on the outside and soft fluffy dough on the inside,” adds Park.

The “basic” cakes can have one additional topping, such as cinnamon sugar, coconut, almonds, or sesame seeds, while they can take some to the next level for a sweet treat, like adding Nutella, caramel, or melted marshmallow cream to the crispy-hot outside, and sprinkle toppings on that.

But if you were thinking: “That chimney hole would be great filled with ice cream,” well, The Kürtősh agrees, serving a Chimney Sundae and a Chimney Dessert Plate.

Rather have your chimney cake savoury? Order a Chimney Dog. “We put the sausage inside the cheese chimney bread like a hot dog,” describes Park.

To go with the Chimney Cakes, The Kürtősh serves drinks, like coffee, tea, and smoothies as well. Take a look at some of their creations: