For those who don’t remember, Rick Hansen wheeled the Great Wall of China. Fast-forward twenty-four years and Michael French’s “Heart of a Dragon” is in theatres. Many agree that this flick failed to captivate in many ways so I sat down with Director Michael French and actress Sarah-Jane Potts to learn more. I heard a story more interesting than the movie itself.

Looking to shoot on location, producers of Heart of a Dragon secured a filming location right on the Great Wall. Here’s the catch: the Chinese government only granted two weeks to film the entire movie. I am familiar with many of the processes in the industry, and shooting an entire movie in fourteen days is a real handicap. Though it doesn’t add up to the life-long disability that Hansen carries, it certainly influenced the life of “Heart of a Dragon”. 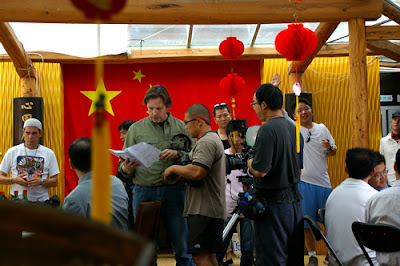 I asked French if he ever tried to stoke the tension that Hansen and his friends experienced in 1986 in the cast. Sarah-Jane was quick to point out, “Michael would try to calm down the cast and crew.” Some of the Chinese crew that had not “learned the dance” of film making and the cast was much stressed over such a short time to film. French was actually the counterpoint to the anger on set.

“Our primary camera broke on the first day of filming.” French didn’t have a lot of time to fix mistakes. But with tension running high on set, Sarah-Jane instantly became her own character. “I’ve never been in conditions like that”, Sarah-Jane told me. She easily emulated the passion of Amanda Reid, the physical therapist who fell in love with Hansen during his world wheeling tour. It wasn’t difficult for her to be a driven, independent woman who “doesn’t accept no” for an answer.

Ironically, it was a handicap that changed the outcome of “Heart of a Dragon. Coincidentally, the same heart that carried Hansen through China can also be seen in French’s effort to create the movie. Conclusively, the stories surrounding the movie triumph over the movie’s story itself.