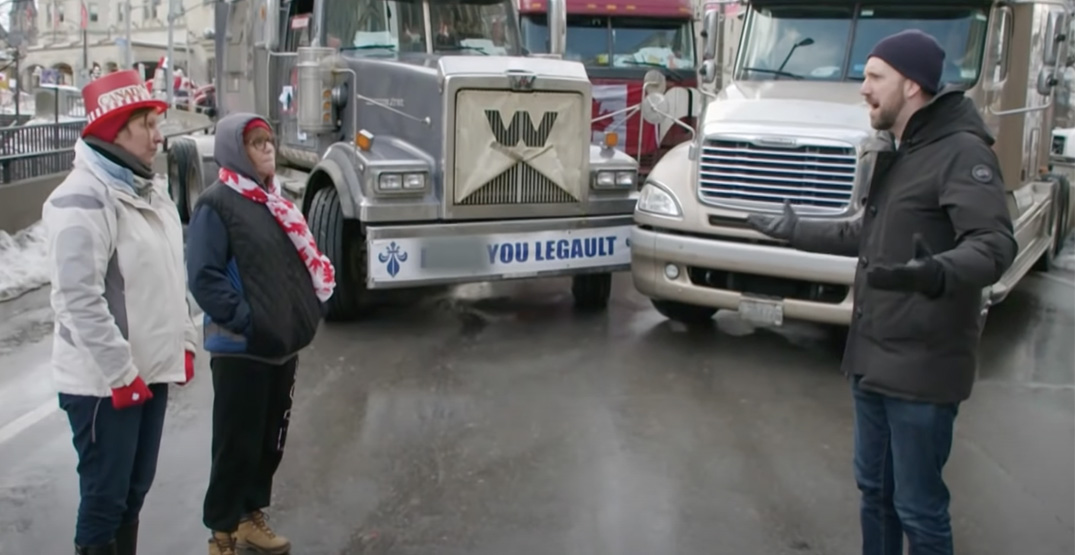 The so-called Freedom Convoy protests in Canada have caught international attention, so much so that the demonstrators got a lovely visit from The Daily Show’s Jordan Klepper.

Klepper — who’s known for taking the pulse of far-right groups in the US like Trump supporters, QAnon conspiracy theorists, and anti-vaxxers — threw himself into the thick of the occupation in Ottawa, or what he calls “Canada’s eighth-best city.”

“Three weeks ago, north of the border, a new kind of protest emerged,” Klepper said on Thursday’s Daily Show. “So I traveled to Ottawa, expecting to find some Canada nice, but their messaging was a bit more coarse. These trucks shut down businesses and made roads impassable.”

The reporter has a reputation for exposing the true colours of his interviewees, so he did not disappoint.

He asked the important questions: What is this all “aboot”? How long will the protesters be staying? Where is his end table that he ordered from Wayfair like three weeks ago?

The answers he received ranged from what he called “generic” to outright conspiracy theories.

One man Klepper interviewed who “smokes a lot of weed,” insisted that he wasn’t paranoid while saying that the government was coming for him. He also compared the choice to get vaccinated in order to slow a pandemic that has killed millions to Nazi Germany.

“I hate to use that slogan, but make North America great again,” said one demonstrator.

“Make North America great again, and I don’t mean to use that guy’s word, but it’s true!” another exclaimed.

Klepper spotted a trucker with what appeared to be a QAnon symbol on his hat. Although, the person sporting the hat didn’t seem to know what exactly he was supporting.

“What Q sh*t is going down here?” asked Klepper.

“Oh, so this is more like a Yankee’s hat,” said Klepper, and the trucker nodded in agreement.

Klepper decided that the hat “might just be a fashion choice,” but the conspiracy theorists weren’t hard to find.

One man he interviewed said the protest was about more than the vaccine mandate, but also about a conspiracy called “The Agenda 2030,” which believes the world is heading towards one government.

“They want to sterilize us and only certain people can have kids,” said the protester.

Another demonstrator insisted that the protest was helping Ottawa’s economy by “bringing in tourists from all across Canada.”

“You can feel the tourism in the air, right?” joked Klepper. “It smells like amphetamines and drifter blood.”

The correspondent also touched on the anger directed towards Canadian media, showing footage of protesters calling out the CBC and CTV.