It was a bittersweet season for the Vancouver Canucks. Yes, they exceeded the expectations of most by finishing with 101 points during the regular season. But in the playoffs they were a disappointment, losing in 6 games to the Calgary Flames.

Not unlike Homer Simpson’s experience purchasing a cursed Krusty the Clown doll for his son, we can point to a lot of good and a lot of bad this season (go with me on this).

Still with me? Good. Let’s continue… 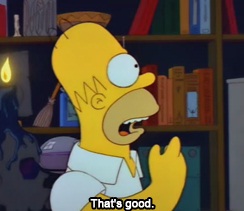 On April 9, 2014 the Canucks shocked everyone and announced that Trevor Linden would return to the organization as the new President of Hockey Operations. While the resulting PR was a slam dunk for Canucks Sports & Entertainment, there was some concern regarding his front office inexperience.

Linden began his tenure hitting all of the right notes. He was able to convince the Boston Bruins to not only let Jim Benning out of his contract, but to also allow him to join the organization before the NHL Entry Draft. Linden and Benning were then able to hire their first choice, Willie Desjardins, as their head coach. In a surprising move, Desjardins chose Vancouver over Sidney Crosby and the Pittsburgh Penguins.

Benning says Jensen has been “real good” in Utica and #Canucks are excited abt him. Sounds high on him.

It was the season of “real good”. How’s the team playing? Real good. How are their prospects? Real good. The coach? Real good.

Willie asked why Hansen was with the twins answers “some things in the room stay in the room”. Goes on saying Hansen did a “real good job” — omarcanuck (@omarcanuck) April 29, 2015

The coach and GM could use a word of the day calendar.

Trader Jim has taken over Philly and he’s not done yet (he hopes anyway) http://t.co/ip3mkYo9cT

One thing that frustrated Canucks fans was the level of patience (or indecision, depending on your perspective) that former GM Mike Gillis used to show with seemingly every decision.

Jim Benning showed right away that he wasn’t afraid to make a decision, making four trades on draft day.

@Shapsquatch @MitchEmDee my point: Kesler trade is a bad trade if Gillis makes it, good trade if Benning makes it (with same players & all)

Returning to our Simpsons analogy, it seems as though the quick decision-making of Jim Benning may have been the Frogurt with unlimited sprinkles, while the players he acquired for Ryan Kesler may be the cursed Krusty doll.

Benning was put into a tough spot with trading Kesler, given his publicly known trade demand and no-trade clause, but the early return isn’t very promising. Kesler fetched Nick Bonino, Luca Sbisa and a pair of draft picks. Bonino had an excellent start to the season (more on that later), but his offence went dry the rest of the way and finished with a disappointing 39 points.

Sbisa was a whipping boy for fans all season long, and performed like a depth defenceman at best. The key to the deal will be Jared McCann, who the Canucks used to select in the 1st round with Anaheim’s draft pick. The third round draft pick was used to trade for Derek Dorsett, who had a fantastic season for a fourth line player.

Still, when you trade a player the calibre of Kesler, you expect a better return.

“I was voted MVP of the Canucks. Most Vrbata Player.” pic.twitter.com/rLsHa7chGU — Wyatt Arndt (@TheStanchion) April 12, 2015

Jim Benning made perhaps the best free agent signing in the NHL this season, signing Radim Vrbata to a 2-year deal worth $5 million per season. Vrbata fit in well and was named the team’s MVP, scoring 31 goals.

Canucks had to give Ryan Miller 3 yrs/ $6 million per because otherwise he’d have signed with … uh … a little help here. Anyone?

Ryan Miller was the big fish caught by Benning to solidify his goaltending, but the signing turned out to be a flop. With a .911 SV% in 45 games, Miller proved that he is an average starting goalie at best and may not be better than Eddie Lack, who carries a cap hit of $1.15 million. Miller could bounce-back next season, but at age 35, he could also get worse.

That’s Good: Canucks are a 4-line team in the regular season

This is the 12th time in 17 games that 3 different #Canucks have scored in a game. Might be something to this rolling 4 lines

The Canucks had perhaps the most balanced attack in team history this year, as Willie Desjardins gave all four lines a regular shift. Eleven different forwards scored 10+ goals this season, up from 8 forwards the year before. The Canucks had just 8 forwards with 10+ goals in 2010-11 as well.

That’s Bad: Canucks are a 4-line team in the playoffs

So Hartley just dropped: ‘you can never give enough ice time to great players.’ Wonder if Willie D is listening in

Part of the reason for playing four lines regularly during the regular season was to be able to keep their best players fresh for the playoffs. Or at least that’s what some people thought.

Willie Desjardins was slow to change his strategy against the Flames and it cost them. The Sedins were the best line the team had by a mile, yet received comparable minutes to Nick Bonino.

But it's early in the season.

Speaking of Bonino, he was helping people forget all about Ryan Kesler at the start of this season. He was red hot and was actually outscoring Kesler.

That’s Good: Bo Horvat got better as the season went on

Credit to the Canucks for sticking with Horvat, giving him ice time and not sending him back to junior.

That’s Bad: Linden Vey got worse as the season went on

Jason Garrison, the man Vey was indirectly traded for, had a good season in Tampa Bay and turned out to be a huge loss for the Canucks.

Much like Nick Bonino, Linden Vey saw his production fall off the map after the first two months of the season. Vey had 12 points in the first 22 games, but just 12 more points in his final 53 games. Vey still has potential, but he struggled to find his way as an everyday NHL centre.

Kassian’s name appeared in trade rumours more often than any other Canucks this season, but Jim Benning resisted the temptation to move out the enigmatic one.

Good thing, too. After a frustrating start to the season, Kassian emerged as one of the Canucks’ best forwards in February, scoring 8 goals in his last 16 games.

Just when Kassian was hitting his stride, wouldn’t you know it, he suffered a serious injury. Kassian hurt his back in a scrum with Dion Phaneuf on March 14th.

That’s Bad: Chris Tanev has a breakout season in a contract year

Good night, LA Kings. Flames get an empty netter from Jiri Hudler, win 3-1. Canucks will play Flames in 1st round.

Before the season began, many felt that even if the Canucks somehow found a way to make the playoffs, they would be doomed in the first round against one of the California teams. That didn’t happen, as the Kings and Sharks both missed the playoffs and the Canucks got a favourable matchup against the Calgary Flames in round 1. 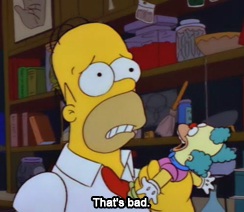 The Boston Bruins fail to qualify for the playoffs. pic.twitter.com/jUlejynNyf

The Canucks’ arch nemesis, the Boston Bruins, are no longer an NHL powerhouse. It brought a smile to my face.

There is nothing bad about the Bruins missing the playoffs.

That’s Good: Reconnecting with the past

Hey Kirk McLean, how do you feel about this game so far? #towelpower pic.twitter.com/gmNAEqNLtj

Although the tragic death of Pat Quinn and Gino Odjick’s illness necessitated some of it, the Canucks reconnected with their past in the 2014-15 season.

It was cool to see Trevor Linden, Kirk McLean and Pavel Bure standing side-by-side wearing the skate jersey (it was the 80s skate jersey that Bure played a game in, but I’ll take it). I loved seeing McLean, Stan Smyl and Greg Adams fire up the crowd before each playoff game as well.

The street outside of Rogers Arena is now named “Pat Quinn Way”.

Standing ovation prior to the 3rd for Gino Odjick. His thank you letter to #Canucks fans just aired. Check it out – https://t.co/rsLJBbqyjh

And the thank you letter from Gino Odjick to Canucks fans was something else.