(Full Disclosure: I wanted to test drive the Jetta Turbo Hybrid so badly, that I had my friend take me all the way out to a Richmond industrial park to beg and plead with the folks at VW Canada to let me take one out for a week long spin. Thankfully, they said “Sure! Why not?”)

I’m not going to waste your time and list a bunch of meaningless specs, because frankly when the chips are down, car buyers care only about a few things; fuel economy, safety, and reliability. Sure, this Jetta performs admirably, often being the first off the line and passing other cars with aplomb. But the coolest part of this car is that it goes a long way between fill ups. The needle on the gas gauge didn’t even budge for the first 150 kilometers. I thought this was odd and wondered if there was anything wrong with it, but no, It’s definitely a very fuel efficient car. Now when you’re in a Prius or some other hybrid, the instrument cluster basically looks like a sci-fi control panel. VW has chosen to omit the graphs and glowing bars in favor of the tried and true, dual gauges. RPMs on the left, and speed on the right. Any info you may want regarding the hybrid system is available on the touch enabled nav screen in the centre console. All buttons and controls are easily within reach so you rarely, if ever have to take your eyes off the road. (That whole safety thing, remember?) 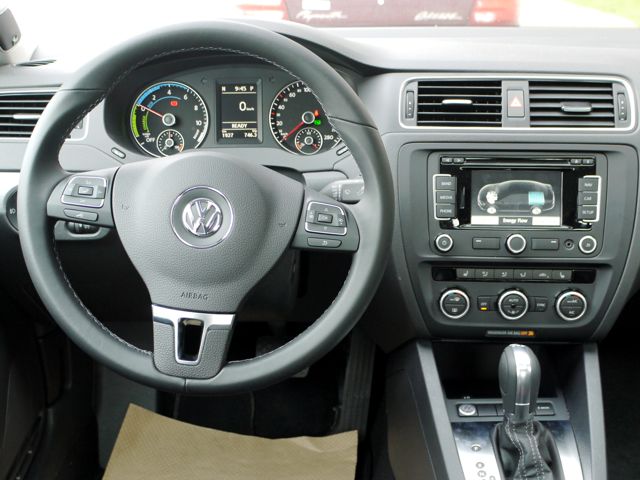 Now, this car is efficient as-is, but one of my favorite features is E-Mode, which, in a nutshell, orders the car to use its electric motor as often as possible, thereby keeping fuel consumption at a minimum. Just don’t be a leadfoot as it does interpret a stomp on the accelerator to be a call for full power and disengages the system. I would often see how far I could get using just the electric motor and as long as there was charge in the battery, I was rolling green. Sadly, I wish the battery was a bit bigger as I would use E-Mode often enough to drain the battery, requiring the 1.4 liter engine to kick in and recharge the cell. Still, impact on fuel economy was minimal, and I managed to get close to 900 kilometers on a single tank of gas. And that’s in the city. On the highway, fuel economy went up to a stingy 4.5 l/100km without any decrease in power or performance thanks to the computer controlled 7 speed transmission, which definitely goes a long way in helping the Jetta achieve these impressive stats. Those who would choose to dispute the numbers, should be aware that a typical compact four door would get about 450 clicks on a 60 liter tank, so with the veedub that 80 dollar fill goes a heck of a lot further. 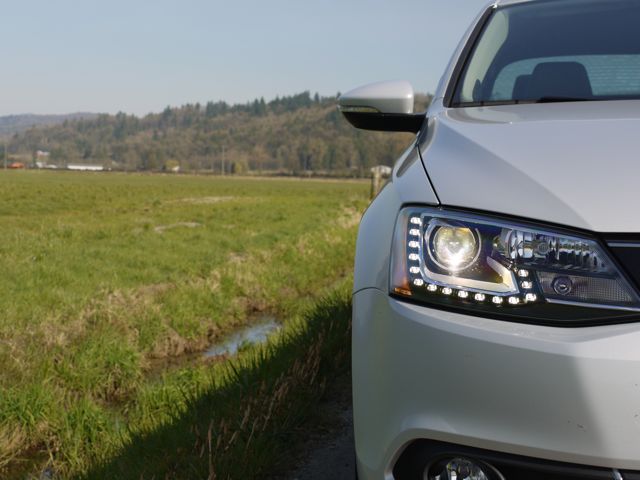 Creature comforts are modest, yet refined and fully functional. Dual zone climate control in da haus, keeps people warm AND cool at the same time depending on preference, and the Fender Audio system is one of the best and loudest sounding car stereos I’ve had the pleasure of using, outside of some aftermarket bass boosted douche audio, found usually in some throwback car you’d see in the Fast and Furious series. The tinted glass sunroof is controlled by a simple twist of a knob just above the rearview mirror and using it becomes second nature after about 10 minutes of driving the car. The interior finish is sparse, yet tastefully appointed with aluminium accents and leather. Rear passenger room is plentiful, the trunk cavernous and dedicated climate controls for those in the back will be welcome on long road trips. Speaking of road trips, I felt no guilt at all just cruising around the back roads of the Fraser Valley at a leisurely pace over a pleasant Sunday afternoon, knowing the gas tank could probably take me halfway to Saskatchewan if I really needded it to. 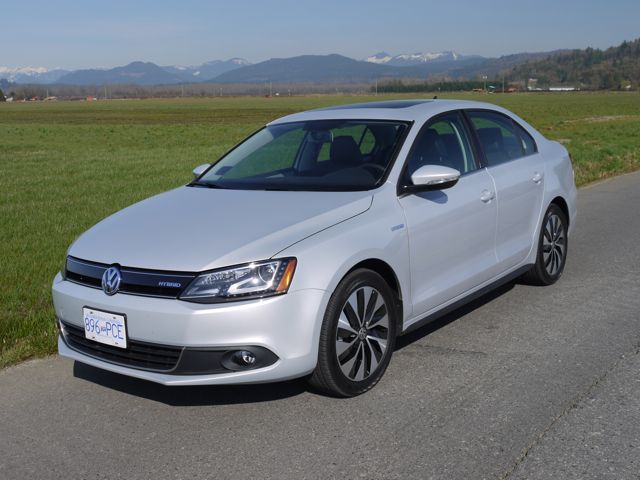 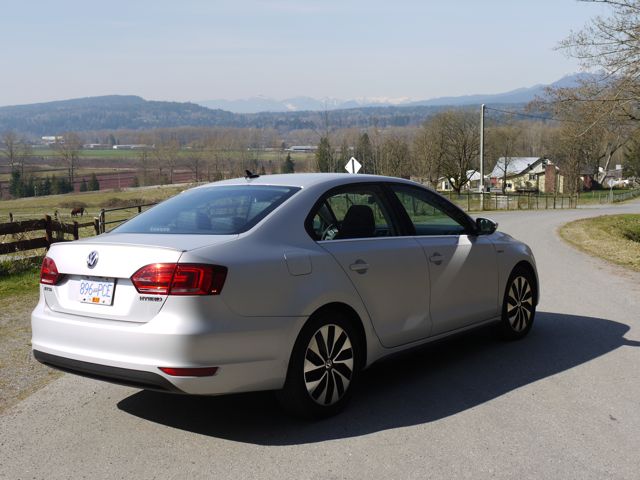 My only gripes with the car were the sketchy Bluetooth iphone intergration, as it took me about 10 times to get the car to successfully link with my phone, and the admittedly grabby regenerative brakes, which took a bit of getting used to. Still that’s not a big deal and very easy to live with after a day or so. All in all, if you’re a eco-conscious driver, or concerned about the ever increasing price of gas, the VW Jetta Turbo Hybrid is definitely worth the 34 thousand dollar (as tested) price tag. You get very decent, semi luxurious styling without being ostentatious, excellent performance from a tiny engine and amazing fuel economy thanks to a very well engineered hybrid system. If you’re in the market for a hybrid, forget the Prius and take the Jetta for a spin. Just don’t act like that idiot in the commercials. Nobody likes that guy.