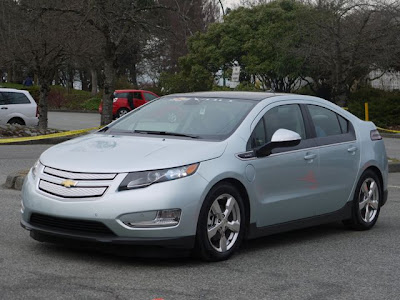 Like any self respecting industrial designer, I’m a big fan of electric cars. So imagine my delight when I found in my Inbox, an invite from the Vancouver Electric Vehicle Meetup Group to test drive a pre-production prototype of the 2011 Chevy Volt at the Museum of Vancouver.

From the outside it’s much like a regular late model domestic, but with a slight futuristic flair. Aerodynamic, yet still retaining some traits from its truck cousins, the Volt’s styling is definitely more aggressive than current offerings from Toyota and Honda. While it will never be mistaken for a Tesla, Volt drivers will probably not have to endure being pointed and laughed at as much as the average Prius owner. Because of the relatively high shoulder, it’s like a super nerdy version of the Chrysler 300. (slap some dubs on and you’re not just ballin’, you’re doing it sustainably)

Inside, the Volt will remind you of the new Star Trek movie. The huge white centre console, all touch sensitive, is awakened by pushing the “Start” button. The main screen lights up with falling leaves followed by the blue Volt logo. Yes, there are sound effects. XM Satellite Radio looks to be standard, and the dashboard, well it’s a lot like what you’d see in any modern sci-fi flick, glowing orbs and what could probably be mistaken for a warp core status indicator. 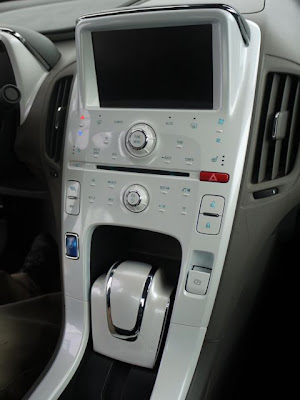 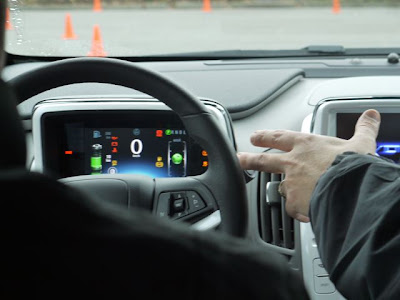 Ok, So how does the Volt drive? Well, the first thing you notice is how quiet it is. Damn quiet. Inside, road noise seems louder because there’s no gasoline engine revving away. Actually, because the Volt is a “Extended Range” electric vehicle, there is a gas generator which charges the battery should you use up the 80 or so KM battery only mode. The model I was testing had about 10 kilometers worth of juice left, so I didn’t get to hear what it sounds like when the “Range Extender” kicked in. That aside, The volt drives like most any midsize sedan would. Not too peppy, but not like grandma’s Colt, either. The “Eco-Mode” is pretty cool, as that’s when the most noticeable regenerative braking kicks in. Just take your foot off the gas and the brakes come on and add charge to the battery. Fancy. Sport mode is a button that lets you chew through the battery a little faster than normal. I was told by Chevy’s Testing Engineer, that it has an average 0-60 time of somewhere between 7.5 and 9 seconds depending on what setting the driver is using.

Final Verdict? It’s like having your own little starship. Lots of blinky lights and big screens reward you for driving efficiently while giving the impression that you’re going much faster than you actually are.

Watch for the Volts doing their thing at various locations during the 2010 Winter Games.