Update: The new “TELUS Garden” as it being called will be 22 floors of office and 44 Story Residential tower with 450 units. This will become the new head office for Telus. The design will be similar to the render above. Project is expected to break ground fall 2011.For years many people in Vancouver have complained that the downtown peninsula is becoming a huge resort town. While not entirely true let’s face it the in the past 10 years or so Vancouver hasn’t necessarily seen boom times when it comes to commercial development but that’s about to change.

The  announcement that Telus is relocating their head office back to Vancouver (from Burnaby) is a major step in the right direction. 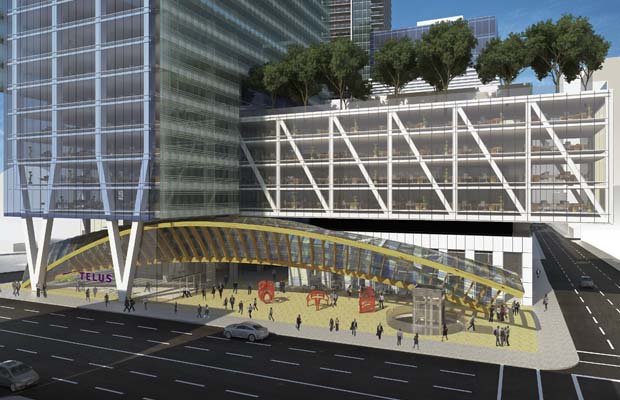 The proposed project is pegged at $750 million. What is known  is that the office portion of the development will be 22 floors (seems a little short and contrary to the inside reports I’ve been hearing). There will also be a 43 floor residential portion. The office tower could have been significantly larger. I was hoping for a single massive 65 floor building as the location is one of those suited for higher buildings.

The architect chosen for the project is the same one that worked on the Woodwards redevelopment, I was excited to see what he would come up with as Woodward’s is one of my favourite new buildings in the city. However, the Telus Gardens design isn’t as daring. The residential component is very similar to the stacked box design for the Marine Gateway project. 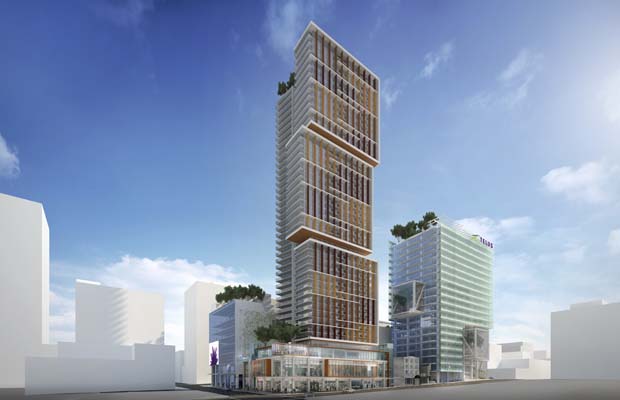 The last significant office development in Vancouver was the 12 floor extension to the existing Bell Tower (Bentall 5) on Burrard and Dunsmuir. In the next 3 to 5 years expect to see at least 3 to 4 new office only towers in the city of Vancouver. You have Bentall 6 across the Shangri-La on Alberni and Thurlow, Rogers Arena Office Tower, Telus proposal and a property or two to be developed by Oxford properties.

Furthermore, look for a shift as many companies (head offices, regional offices in particular) in the suburbs are having difficulty attracting the right kind of worker as many people prefer to work downtown rather than an office job in the burbs, or worse yet far reaches of the Valley.  For some there is more to working than pay as location sometimes plays a big role and on this continent there aren’t many places that rival downtown Vancouver.

Further, word on the Street is Rogers is also pulling out of their building in Metrotown, however, that is just a rumour for now…