A local high school student says she was told by a TransLink bus driver her discounted transit pass was invalid during the teachers’ strike.

16-year-old Sydney Walsh took to Twitter to voice her upset about the incident, which took place the morning of Monday, September 8, when she boarded the #341 bus in Cloverdale near 58 Avenue and 176 Street to get to her job, according to The Province.

Walsh says she deposited her $1.75 discounted fare, and was asked to present her Go Card. The driver allegedly told Walsh there was no discount because of the ongoing teachers’ strike.

The high schooler’s Go Card, however, was stamped with an October 31, 2014 expiration date.

Walsh refused to pay the additional $1, but was still able to ride the bus to work at a Langley fish shop. 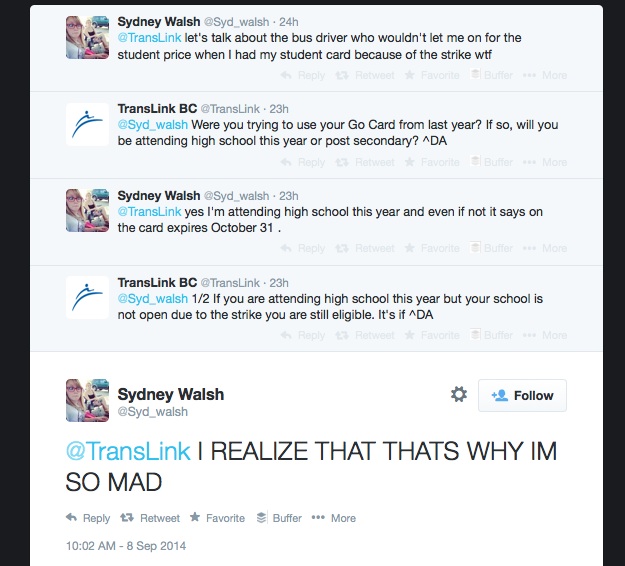 Walsh attests she and her friends have had several issues with TransLink buses this summer, including buses passing them by. The teen, however, says they have not filed formal complaints with the transit agency because of past experiences with the online submission form; Walsh told The Province she and her friends would check off the box on the form asking for a reply, but never heard back.

Walsh (left), says she and her co-worker, a friend and fellow student, have had issues with TransLink this summer.

TransLink confirms Walsh did not file a complaint with them about the September 8 incident, and also says all students’ Go Cards are valid until October 31, regardless of the strike.

Walsh is upset with TransLink, as well as the ongoing strike, according to her Twitter feed. “This whole not knowing with school thing is really stressful,” she tweeted in August.

The student also told The Province: “I should ride for free because of the strike because I should be in school, not taking the bus to work.”