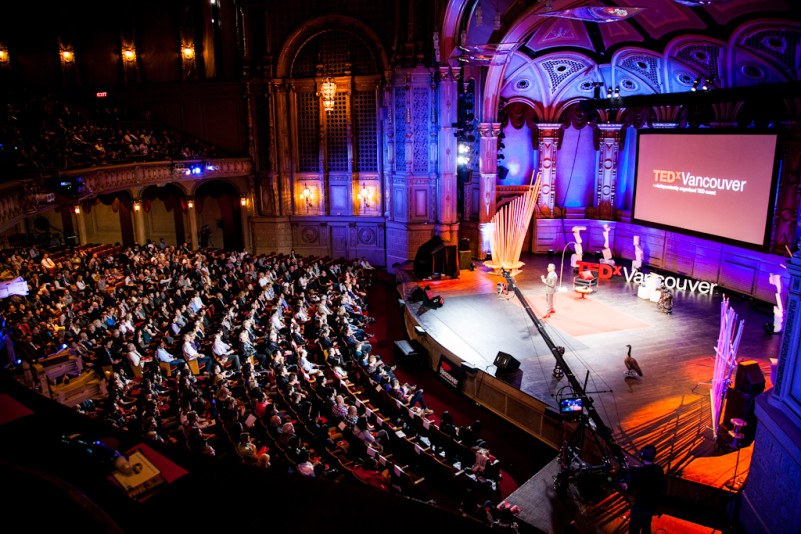 Finally – TEDxVancouver is offering tickets for the November 12 event.

It’s also introduced its first six speakers and performance for TEDxVancouver 2017. Here’s a list of who has been revealed so far – the rest will be unveiled within the coming weeks:

Joely Fisher is best known for her performances in Pretty Smart, Ellen, and Cabaret. Recently, she experienced profound grief in her life, considering the adjacent passing of relatives Debbie Reynolds and Carrie Fisher. The ultimate separation from those she held dear has deeply affected Fisher, and inspired her to passionately advocate for child and family well-being through her contributions to Save the Children and the Dream Foundation.

He’s a Canadian rapper and renaissance man better known as “Maestro Fresh Wes”. Today, Wes is a notable genre ambassador in hip hop, having won Juno Awards and being named CBC Music’s top Canadian rapper in 2013. Having reached this theoretical peak, Wes has sought the new mountains of writing, motivational speaking, and acting. He has been featured as a keynote speaker and co-authored the book “Stick to Your Vision.”

He’s reputable not only for his innovative farming techniques, but the waves his work has inspired. He has been organically farming since the 1970s, and currently runs “Sole Food Street Farms, which is the largest urban agriculture project in North America. His goal is to redefine our values around food, and to usurp the poverty complex of Vancouver. Abelman has written four books and been featured on a variety of media platforms.

Cameron is the former COO of 1-800-GOT-JUNK?, a serial entrepreneur, and inspirational speaker. He has grown from starting businesses at the age of seven to building $100 Million companies. He has given a TED talk on encouraging children to be entrepreneurs. This belief has led to coaching businesses in eliminating inefficiencies and inspiring paths to success. Herold is the author of three business books; “Double Double”, “The Miracle Morning of Entrepreneurs”, and “Meetings Suck.”

David has has pursued a diverse career path with a persistent dedication to justice. As the Chairman of a youth helpline, McCann was responsible for litigating against the Christian Schools of Toronto to obtain a public apology to the victims and families of child abuse. His fight led to one of the largest Ontario Provincial Police investigations in Ontario’s history which saw over 1,600 former students come forward with allegations of physical, psychological and sexual abuse. Hundreds of charges of child abuse were laid against more than 30 Christian Brothers and other staff. This drive towards reconciliation inspired him to travel to the Vatican to pressure the Pope to apologize for cases of abuse committed by Catholic priests.

He’s infused her career with the same flare used to prepare countless award-winning recipes as the host of her cooking show, “Spice Goddess.” Bal emigrated to Canada from Punjab, India and has elevated her career to becoming an internationally renowned culinary personality and best-selling author. Her culinary values center around the phenomenal benefits of a healthy diet, and the fundamental dynamism of spices.

Performing this year is PraiseTEAM Showcase, an innovative urban dance group of elite students from the performing arts studio. The group has performed in competitions across North America and is known is known for their jaw-dropping choreography which will surely disrupt the TEDx stage. PraiseTEAM inspires both on stage with synchronistic storytelling through the art of dance, and off stage by offering proceeds from their year-end show to strengthen impoverished communities in the Philippines.

“We are honoured and humbled by this year’s line-up of speakers and performers,” says TEDxVancouver’s President, Ian Moore. “2017 has been a fascinating year on many levels, the term ‘distortion’ being especially relevant. This year’s line-up of trailblazers, innovators, and change-makers will no doubt leave attendees feeling inspired and empowered.”

Tickets will be offered at different price points. The main event at the Vancouver Playhouse is priced at $149, the satellite venue hosted at Microsoft Vancouver is priced at $79 and the remaining satellite venues at Hootsuite head office and Vancouver Film School are priced at $49. All ticket selections include food options and entry into the official TEDxVancouver afterparty.