The only thing worse than not having a tech job is applying and interviewing for one.

Ask anyone with a tech or IT background in Canada and they’ll tell you the same thing: the job application system is broken. From the recruiters to the job postings to, especially, the interviews, talented people feel like a piece of meat as they’re handed along the line.

One startup here in Vancouver believes that getting a job should be easier, and both sides should get a chance to be a part of the process. It’s called TechRecruiter, and to highlight just how out of touch recruitment processes can be, they want to hear about the worst interview questions that you’ve ever faced.

It all started when a young recruiter took a look at his own industry and saw that something was broken. Andrew Pollard, one of the best in the recruiting business, placed his first CEO of a public company at the age of 21, took his first live interview on BNN at 25, and was recognized by BCBusiness as one of their 30 under 30 in 2014; the very profession that his new venture is looking to cut out of the equation.

“Tech Employers are fighting for talent and it is in incredibly short supply while outside recruiters are having a field day and getting rich in the process,” Pollard said. “The problem is that Tech Employers and recruiters are using the exact same resources to find talent, and at this point, those resources are tapped. Not only does this pit recruiter against the hiring company, but it also creates confusion for Candidates. That’s why we set out to create TechRecruiter.ca, a new resource for tech professionals to connect directly with employers and circumvent recruiters completely.” 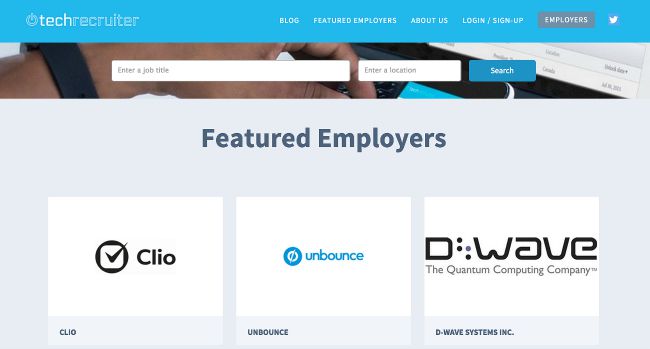 Andrew has teamed up with well-known marketer, investor and agency founder Conner Galway of Junction Creative. They’ve put their respective industry expertise together to create a place for Canada’s booming tech industry to connect.

“The two biggest problems in this industry that I kept hearing about were: it’s impossible to hire great people, and it’s even harder for great people to find work,” Galway said. “So when Andrew approached me with this idea, I was in before he even finished telling me about it.”

The TechRecruiter guys are off to an impressive start – in less than a month they’re helping some of the biggest in the industry to fill their roles. A few Vancouver companies already on board include Hootsuite, Relic Entertainment, Industrial Light & Magic, BC Lottery Corporation, SHOES.com, and many others from across the country like Big Viking Games based out of Toronto.

Now that they’re one of Canada’s largest tech job boards, the next step is to get the word out to people across the tech industry that they’re fixing the job-seeking problem, so they want to hear from you: what’s the worst/ridiculous/craziest interview question that you’ve ever been asked?

Comment with yours here, post it under this article on Facebook, or tweet it at @TechRecruiterCA – because they’re giving away up to $250 in free beer from Postmark Brewing to some of the best (or worst) entries. For more details, check out their website.