These Canadian hockey jerseys will be worn exclusively in competition by the men’s, women’s and sledge hockey teams representing Canada.

The Team Canada hockey jersey will be at the forefront in Sochi, showcasing Canadians’ passion for the sport and speed of the game. Essential to the fabric of Canadian culture, the jersey represents national pride. Taking inspiration from the iconic designs of vintage Canadian jerseys, the 2014 jersey is also 15 per cent lighter than the 2010 Nike hockey jersey, with a modern neckline incorporating Nike flywire and lightweight graphic badges.

“When designing the new uniforms, we were very purposeful in our approach of blending Canada’s rich hockey history and tradition with the performance needs of today’s athletes,” said Ken Black, senior creative director, Nike. “We constantly strive to provide athletes with leading Nike technology to give them a competitive edge on the ice. Decades of design and adaptations from our leading products in other sports allowed us to create a lightweight jersey that maximizes range of motion and speed while bringing to life the pride of competing for Team Canada.”

“The new Olympic and Paralympic jersey is an emblem of Canada’s passion for hockey. Not only are we proud of the athletes who wear the jersey, but I encourage all Canadians to wear it to show support for our players,” said Bob Nicholson, Hockey Canada’s president and CEO. “These jerseys are distinctly Canadian and will ignite our nation’s pride each time Canada’s athletes take to the ice to represent their country and the Canadian Olympic and Paralympic teams.”

“Canadians have been undeniably captivated by the Canadian hockey jersey for generations,” said Marcel Aubut, Canadian Olympic Committee president. “For many, the red and white are not mere colours and the maple leaf is not just another symbol; rather, it has become a part of our very own identity. It stands as a reminder that despite our perceived differences, we as a nation share a passion and a tradition with the capacity to unite regions, languages and cultures.”

“I know that Canada’s National Sledge Team will take great pride in wearing this jersey at the 2014 Paralympic Winter Games next March,” said Karen O’Neill, chief executive officer of the Canadian Paralympic Committee. “Our sledge hockey team is a world power and will be a formidable presence in Sochi. Hockey Canada’s jersey has the exciting potential to unite all Canadian hockey fans as well as the Paralympic community.”

Canada owns a unique place in hockey’s history. Canada’s achievements on the international stage are celebrated in three distinct versions of the Olympic jersey including a red jersey, white jersey and black jersey. Inside each jersey’s collar, players will find 12 gold maple leaves to represent Hockey Canada’s total number of Olympic and Paralympic gold medals – eight in men’s hockey, three in women’s and one in sledge.

What do you think of the Team Canada 2014 Olympic hockey jersey designs? Let us know by commenting below.

RED JERSEY
The iconic red jersey celebrates the rich history of hockey in Canada. From the vintage-inspired logo on the new lightweight front crest to the Canadian flag on the sleeve and the maple leaf graphics on the shoulders, the new jersey represents Canada from top to bottom. 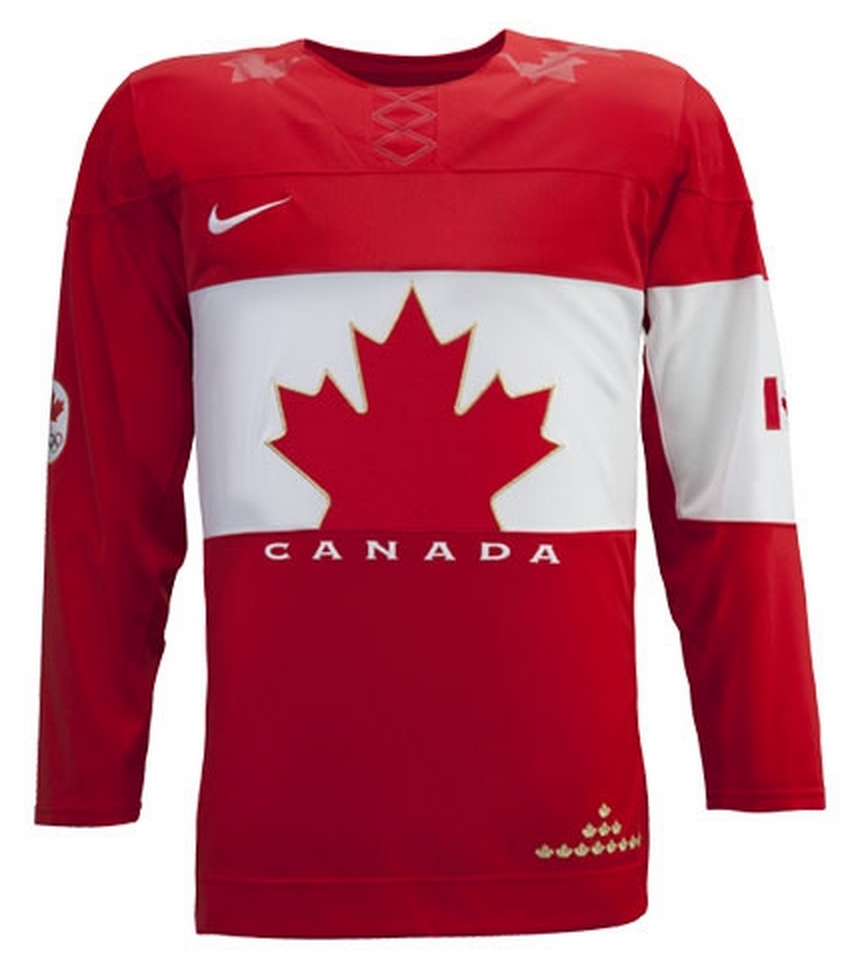 WHITE JERSEY
Unmistakably Canadian, the white jersey is the perfect complement to the red. With ‘Canada’ standing out proudly in red on the white background of the front logo and the country’s colours flowing through the asymmetrical stripe on the left arm, this jersey is a perfect representation of the pride Canadians feel when it comes to hockey. 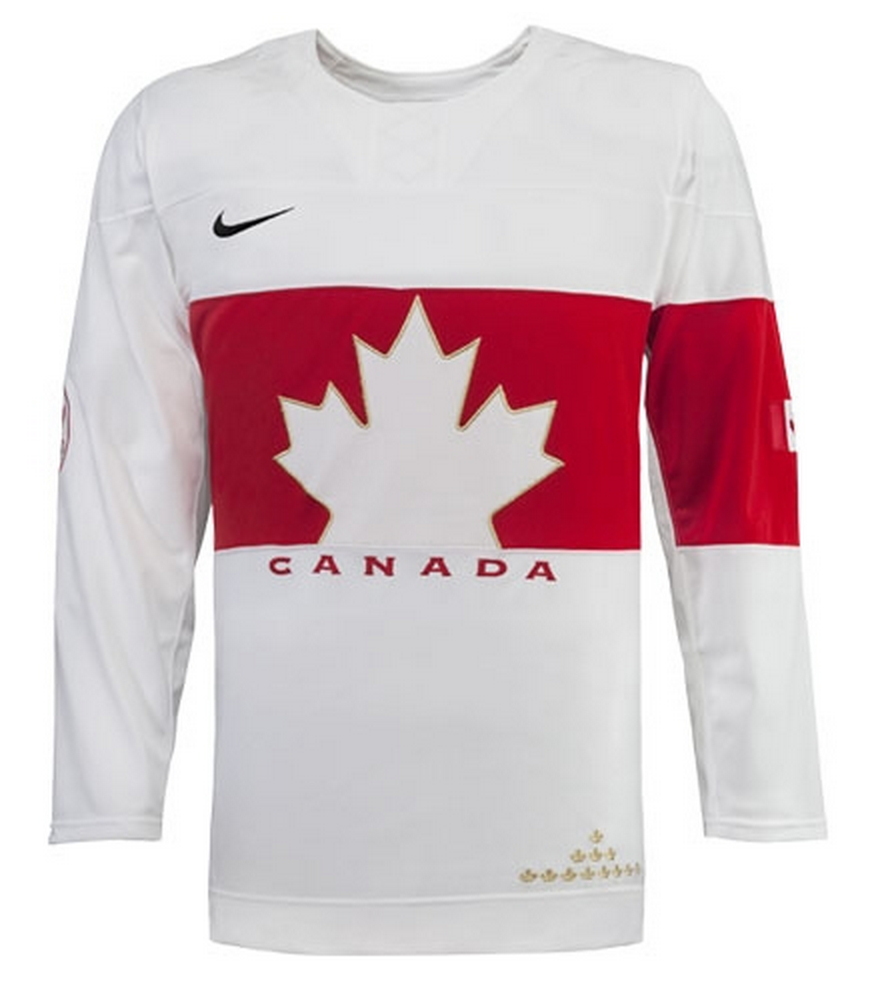 BLACK JERSEY
To round out the exciting collection of jerseys for the 2014 Olympic and Paralympic Winter Games, Hockey Canada chose to add a black third jersey. Inspired by memorable vintage Team Canada jerseys, this jersey will inspire our Olympians to win again. The bold ‘Canada’ word mark on the chest reminds the world of Canada’s hockey heritage, while the gold piping on the badges and gold maple leaf on the shoulders remind the world of Canada’s goal to win gold medals in Sochi. 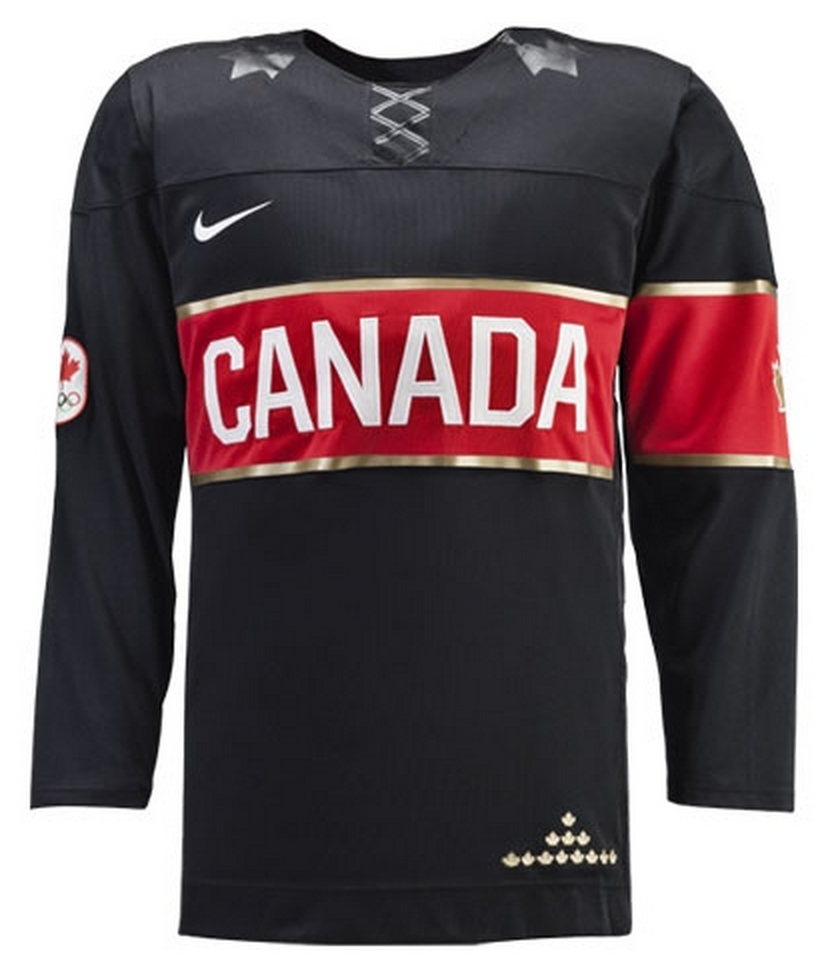