Nearing their two-year anniversary in Yaletown, The Parlour will be showing off their eclectic appetizers and signature pizzas for their second year as participants in the Taste of Yaletown.

The orange glow of the pizza oven glints from the open kitchen inside The Parlour, like a fireplace at the heart of a warm gathering space. Despite the austerity of the room’s concrete walls and pillars there is an indisputable warmth and aura of cozy welcome, evident in the smaller details like the cheery single stems of pink flowers in short glasses on the tables, or the thick, soft kitchen cloth-like napkin wrapped around each place setting.

Chef and owner Sean Holland explains that there’s no deep fryer or microwave in their kitchen, and the small freezer is just the right size for holding ice cream and ice cubes for those who take their Scotch on the rocks. The Parlour’s diverse menu skews towards fresher, lighter fare, and is abundant in vegetarian and gluten-free options.

For Taste of Yaletown 2014, The Parlour’s $35 menu offers guests their choice of two appetizers (excluding “The Board,” their meat and cheese selection) as well as one of their inventive pizzas.

You may not even need to use those napkin-wrapped forks and knives, since The Parlour’s food is largely the kind you can eat with your fingers. It’s understandable, though, you may want to lick those fingers if you’re pulling pieces of tender hoisin and tamarind marinated short ribs from their stack, or divvying up the zesty ahi lettuce wraps. 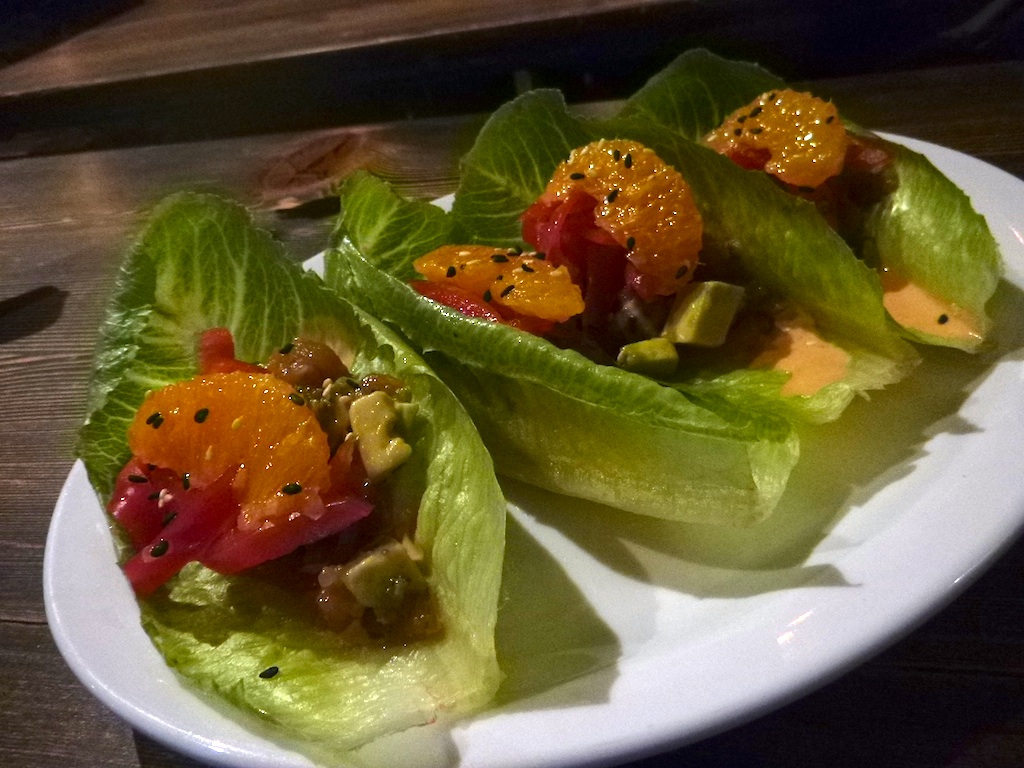 The Parlour’s pizzas are served on a delectably light crust that offers that perfect pairing of crunch and chew, and the toppings pendulum swings wildly from their take on the Hawaiian–the Five-O–to their cheese-less Yaletown, which has raw ahi tuna slices, red and green onion, creamy avocado, the pow of raw jalapeno slices, cilantro, and a fiery aioli zig-zagging its way across the pie.

Inspired by a pizza Holland enjoyed on the beach in Mexico, The Parlour’s Yaletown pizza is a great example of the kind of flavour adventure the Taste of Yaletown event affords. Their most popular pizza, incidentally, is the meat-centric The Dirty, which includes, meatballs, extra pepperoni, and banana peppers. Many of their pizzas can be made using gluten-free dough, for an additional $4 charge.

The vibe in The Parlour as the evening turns to late night can get a little boisterous and clubby, so your pizza might comes with a side of party.

The Parlour’s apps and pizzas are great for sharing, but if anyone at your table strays from the Taste of Yaletown menu, they’ve got salads, raw wraps, and sandwiches served on made-to-order bread that are worth checking out, along with a selection of craft beers and creative cocktails.