The third Tap & Barrel restaurant, situated in a prime location adjacent to Lonsdale Quay in North Vancouver, will be the largest restaurant in Western Canada as soon as they open their doors for business.

Poised to launch on Tuesday, July 28, the wine, beer, and food mecca is an impressive 14,000 square-foot set-up inside a repurposed 100-year-old building that is sure to draw scores of diners and drinkers.

Owner Daniel Frankel (The Daniel Group) walked me through the massive space, pointing out some incredible details that add to the guest’s experience at Tap & Barrel Shipyards. “This whole store is next-level in so many ways,” points out Frankel.

From the moment diners walk in they are likely to be wowed by the magnitude of the project; larger-than-life touches like a massive illuminated “TAP” sign over the semi-open kitchen, what amounts to a wall of wine barrels, high ceilings, and bold artwork are eye-catching elements impossible to miss. 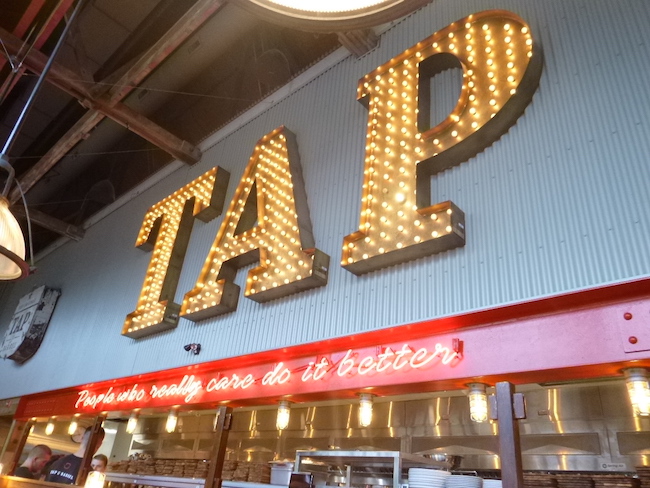 Frankel says he sought out reclaimed and regional materials in order to uphold his commitment to sustainability and his philosophy of working locally. With an eye on the key partnership of form and function, many design details may never go detected by the naked eye (like how all the kitchen and bar areas have seamless, round edging where the floor meets the fixtures or walls so that it is easier to keep clean).

A careful decoding (or a thoughtful tour led by the ultimate insider) of the decor reveals omnipresent nods to industry, particularly the marine sector. Look for large marine-industry ropes, pulleys, even wall trim, throughout the space. Up in each of the two mezzanines, reclaimed work tables function as server’s stations, so that diners in each area don’t have to wait for their server to go far for condiments, extra napkins, and so on. In some areas the crown moulding is actually grating from a pulp mill in northern B.C., and their Edison bulbs actually hold LED light strips; these first-of-their-kind lightbulbs will give off light for seven to 10 years. 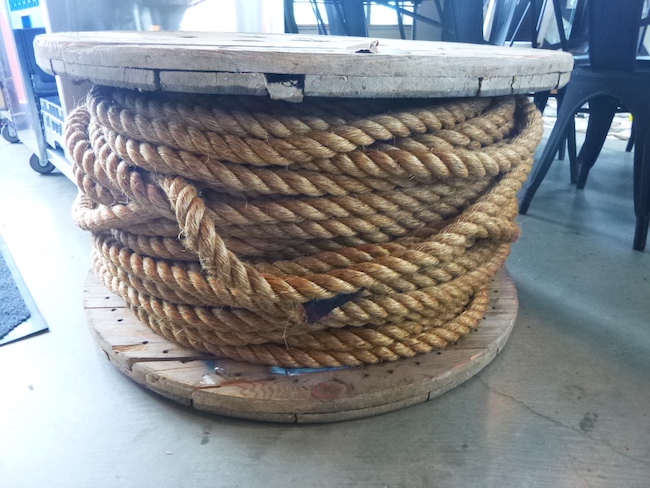 Also in one of the mezzanines is a beautiful built in bookcase wall that allows Frankel to spotlight one of his favourite issues: Literacy. Charmed by the notion of cafe or bar lending library, Tap & Barrel’s also functions as one: Feel free to take a book, or bring in a book or two (many of their library’s tomes were donated).

Frankel, a native Vancouverite and longtime restaurant professional, is proud of what Tap & Barrel has become in the industry, and their role in cultivating leadership among the staff, as well as the restaurants being a platform for efficiency, and environmental sustainability and stewardship. 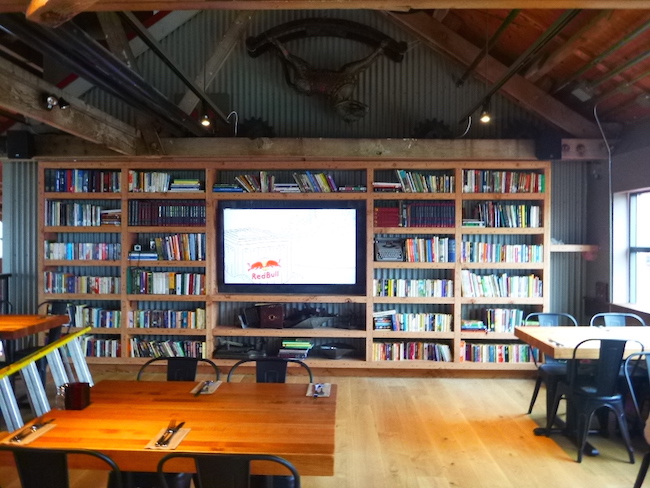 In the kitchen, state of the art equipment in an efficient layout helps the cook staff turn out food that is consistent–and consistently good-tasting. For example, the oil is filtered nightly, which not only saves oil, but also means the fried foods won’t ever have that foul “old oil” taste. 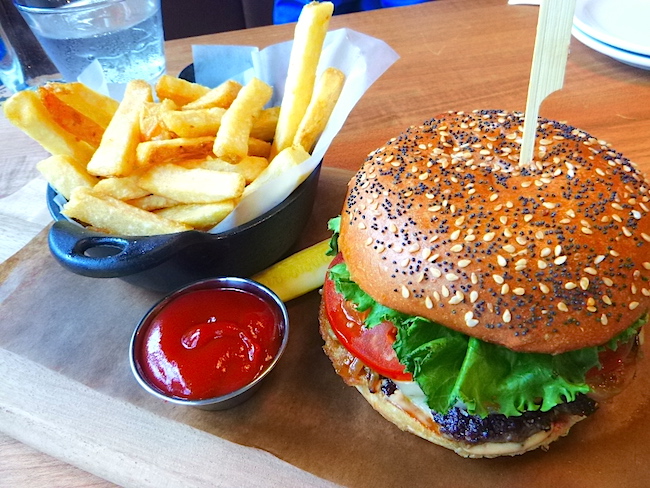 Speaking of food, those who love Tap & Barrel’s wine and beer program but who haven’t given their food a chance in recent months, will see some fresh life breathed into the menu at the new location (along with the predecessors in Olympic Village and at the Convention Centre).

Recently brought on as Executive Chef for all the T&B restaurants is Brian Everett, who took the new post as an opportunity to infuse the restaurant’s menu with more light and bright flavours and dishes. Heading the Shipyards kitchen is Chef Kieran Kearns, last at The Charles Bar in Gastown. 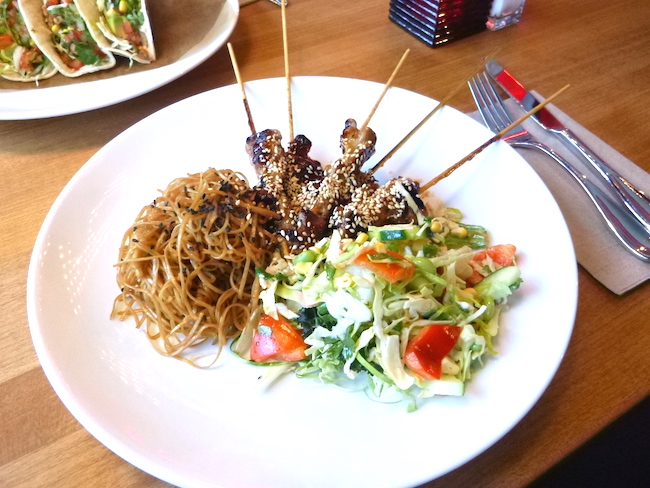 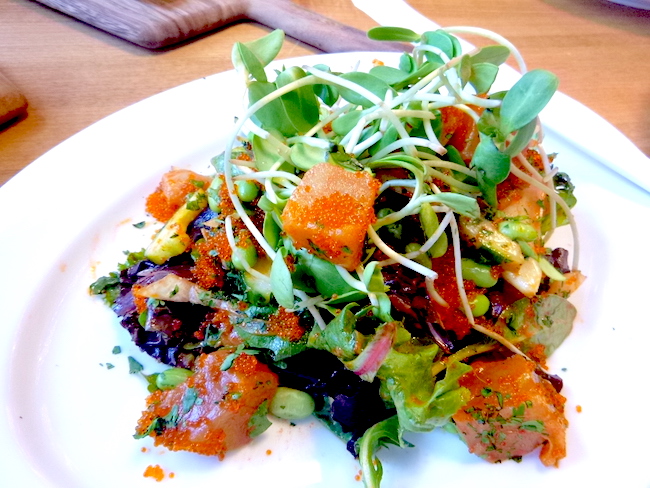 When it comes to comfort food, the menu has robust selections for kids or kids-at-heart. Their Southern Fried Chicken Strips are beautifully tender and coated in a crunch-tastic smashed corn flakes breading and come with a creamy buttermilk ranch dip. Another standout is the Pork Belly & Soft Egg Flatbread, which includes caramelized onions and smoked mozzarella (not to mention those sunny, quivering eggs). 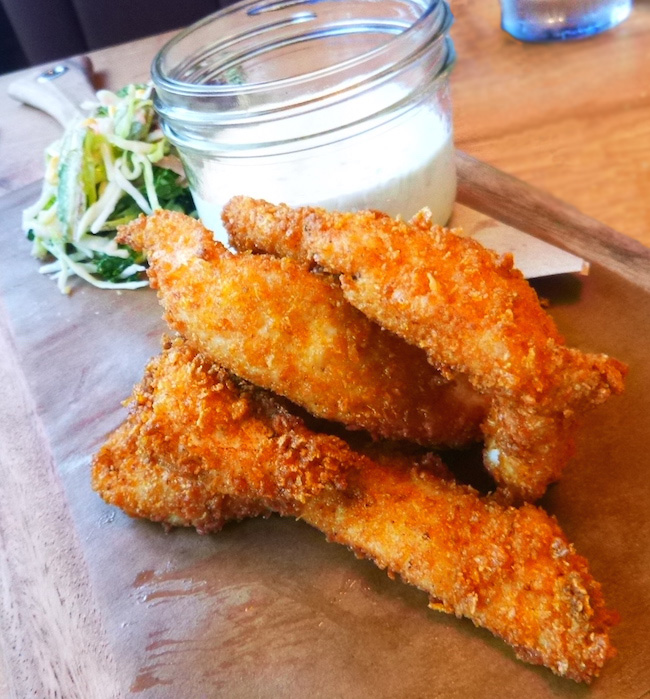 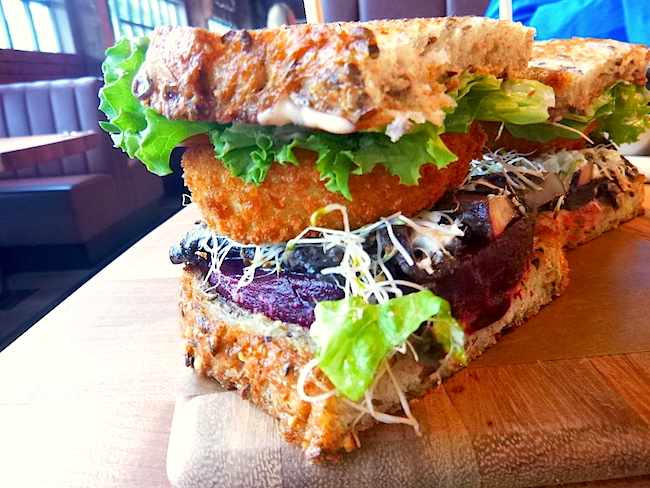 One of the best things on the menu is their Toasted Garden Veggie Sandwich, which is the kind of satisfying concoction that has the power to make carnivores not miss meat. Between slices of nutty mulitgrain toast they wedge a thick slice of roasted beet, portobello mushroom, goat cheese, tomato, lettuce, sprouts, a crispy onion ring, hummus, and house mayo. This is one serious–and seriously good–sandwich. 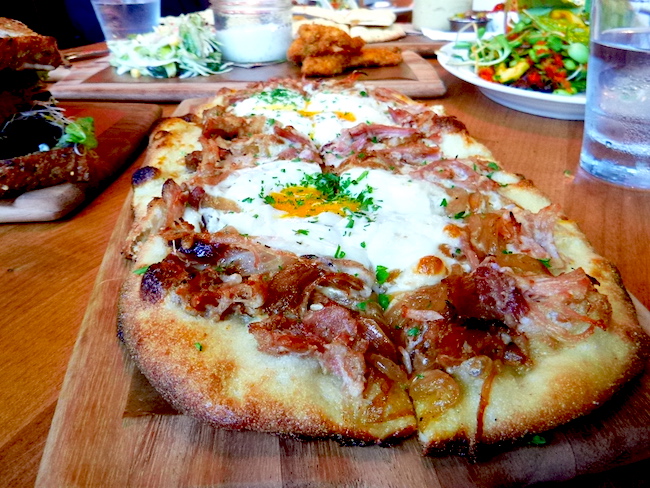 If you manage to save room for dessert, Tap & Barrel is rolling out some items that make use of their homey, rustic accoutrement, like mini cast iron pans and glass mason jars. The Black Bottom Mason Jar Pie is made with chocolate ganache, bourbon cream, and a gingersnap crust worth digging to the bottom of the cup for. If you are a coffee drinker, it’s noteworthy that this is the first Tap & Barrel with an espresso program, too. 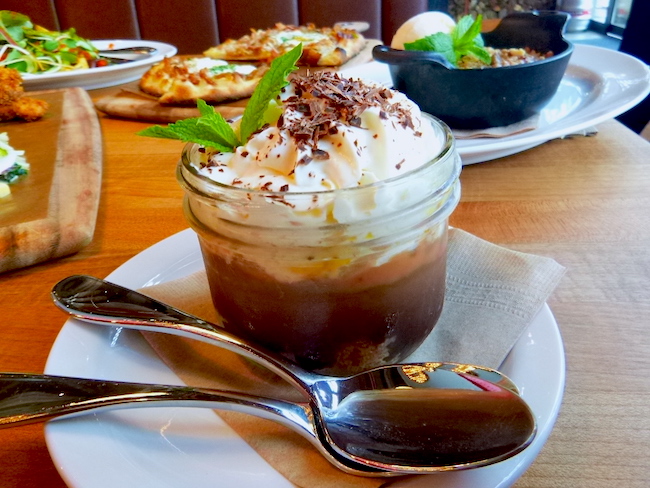 Of course, Tap & Barrel is known for their wine and beer programs, and with the massive tap room in full view, it’s indisputable that this is a great destination for craft beer lovers. Frankel says the idea is to emphasize breweries in the vicinity of each location, so expect to find more North Shore and surrounding areas represented on the taps at the Shipyards location. Frankel calls this a “hyperlocal” approach to beer list curation. 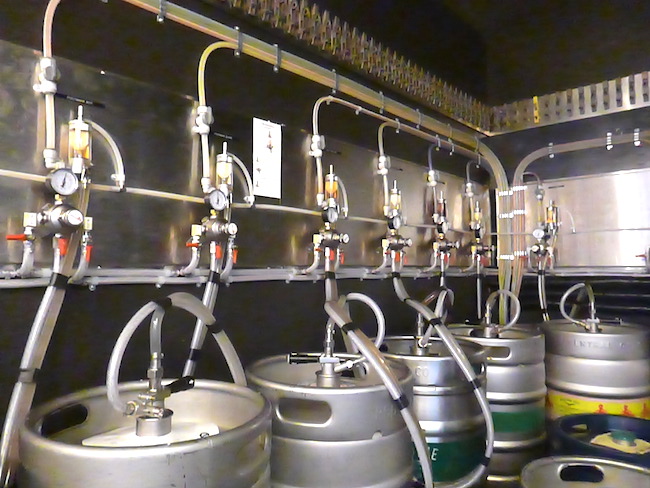 Beer enthusiasts will appreciate the custom-designed aluminum trays that hold the glasses for beer tasting flights. The trays are kept chilled, and Frankel says this means even when diners are outside on the patio imbibing in the sun for a while, their beer will stay cold. Choose from pre-selected flights, or build your own.

The same DIY approach applies to their wine program, however there are other ways in which the Tap & Barrel approach to wine stands out. First, all of their wine is in barrels–no bottles whatsoever–and it runs on something akin to a “blackboard program,” as in when they are out, they are out of certain wines. Additionally, many of the wines on their list are exclusive to Tap & Barrel, giving oenophiles the chance to have deeper encounters with their favourite vintners, and explore more territories, too. 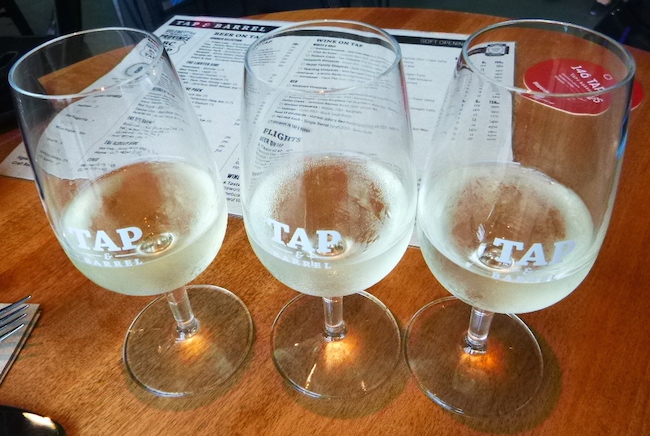 “We treat out beer like wine, and our wine like beer,” elaborates Frankel, explaining that both drinks are “up on a pedestal” at Tap & Barrel, and subject to thoughtful curation and care of presentation. The staff are all trained on flavour profiles of both beer and wine offerings, and can make pairing suggestions, too. 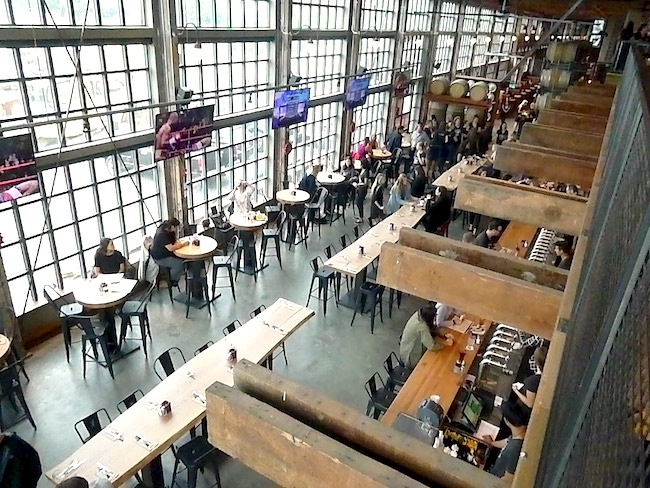 In the bar area, customers can belly up to the bar and plug in their phones for charging at USB and plug terminals, and also use their high-powered complimentary WiFi. (There are purse hooks, too, hooray!) A huge projection system is set to play major events on a huge drop-down screen, and there are TVs throughout so sports fans can follow the game. If TV isn’t what your eyes want to settle on, the restaurant is brimming with colourful and evocative artwork; Frankel is an avid collector, and sees his restaurants as an amazing opportunity to engage the public through art.

Though Tap & Barrel’s massive Shipyards outpost is ready to serve, there’s still some work to be done on their three patios. One in particular Frankel promises to be a “pimpin’ patio,” with custom-designed firepits, booth seating, sofas, and communal seating areas. Look for that space to debut in a couple of months.

“It’s been a lot of fun with the attention to detail,” says Frankel proudly. “We have such a dedicated team here. I’m so lucky and so inspired to be working with these professionals,” lauds Frankel. 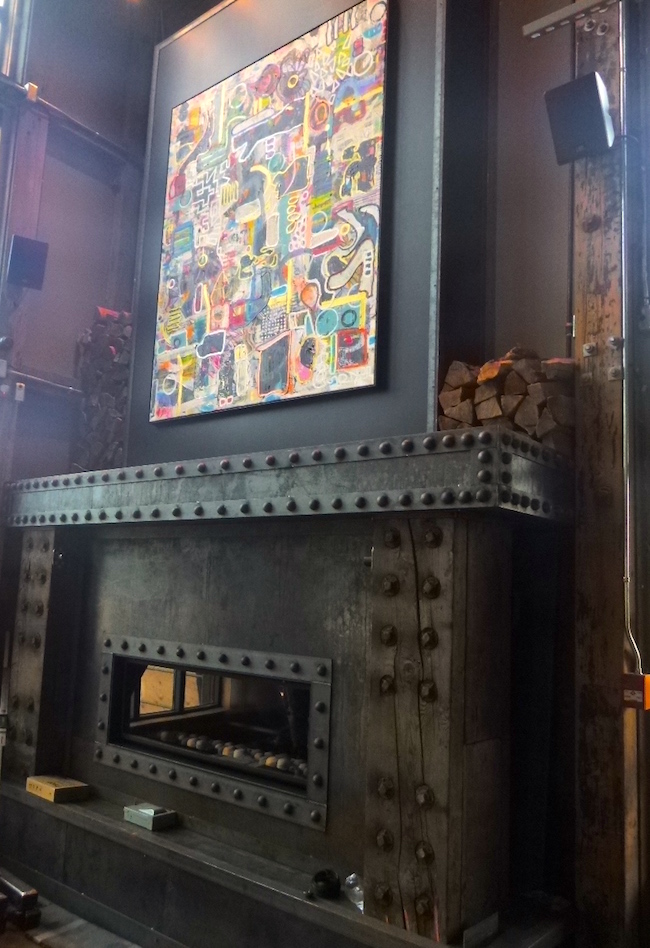 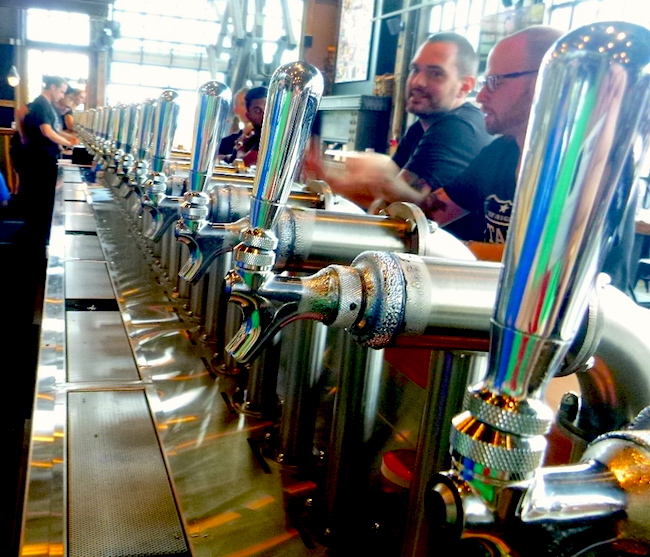 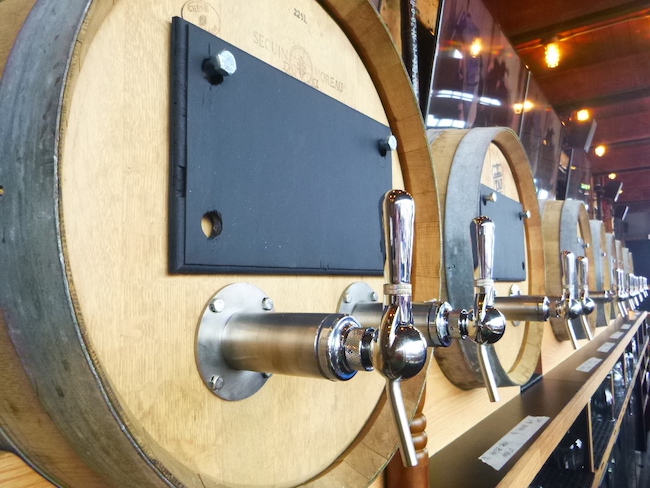 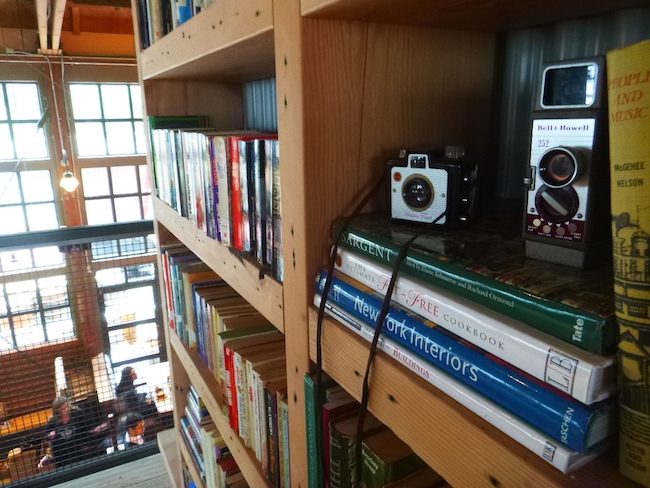 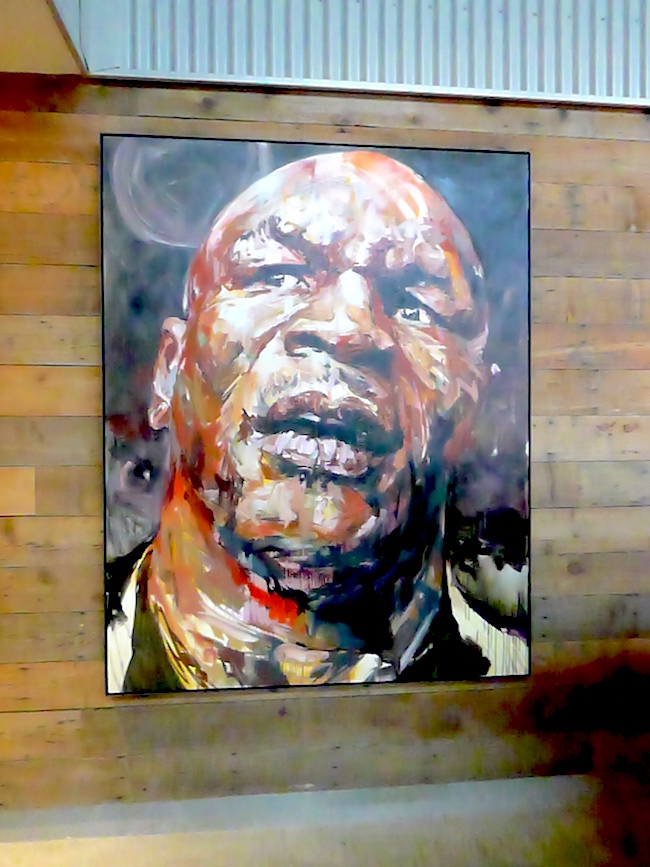 More of the artwork on display (Lindsay William-Ross/Vancity Buzz)