With just two games to go, the Canucks will put us out of our misery on Saturday, but not before a game against the Calgary Flames tonight.

The Canucks lost to the Oilers 6-2 last night, which was huge for the tank movement, even thought the Canucks won’t finish below the Oilers in the standings. More on that in a moment.

Just one game of consequence for the Canucks last night (other than their own) and they got the result they needed.

The Canucks loss means that they will no longer be able to catch Arizona or Montreal, guaranteeing a bottom-6 finish. The loss also meant that Calgary surpassed them, given that the Flames hold the ROW tiebreaker.

Of course, the dream of finishing below Toronto and Edmonton died a few days ago when the Canucks started winning games, of all things.

A bottom-6 finish does not guarantee a bottom-6 draft pick, as the top-3 picks are up for grabs in a weighted lottery. Vancouver currently has a 9.5% chance of getting the first pick. 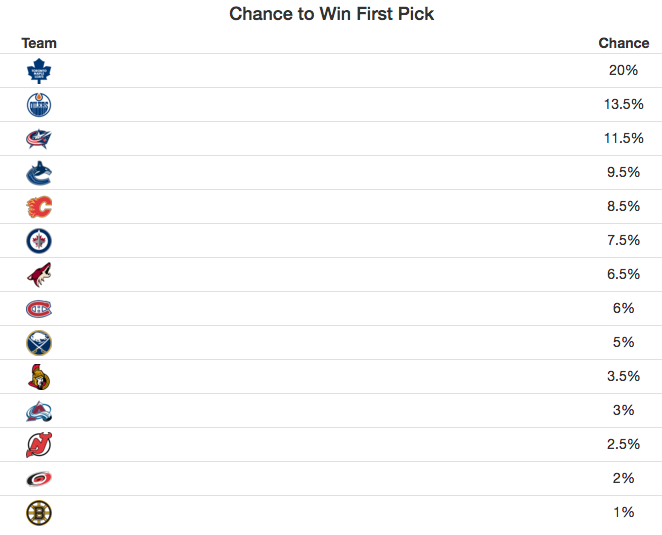 The Canucks have not picked higher than 6th in the draft since picking Daniel and Henrik Sedin with the 2nd and 3rd picks in the 1999 Draft. In 46 years, Vancouver has never chosen first overall.

Tonight’s games of importance for the Canucks

This has the potential to be a massive night for Team Tank.

A regulation loss to the Flames would mean Vancouver can’t catch Calgary, and guarantees a bottom-5 finish. If the Canucks lose in regulation AND Winnipeg earns a point, the Canucks will guarantee a bottom-4 finish.