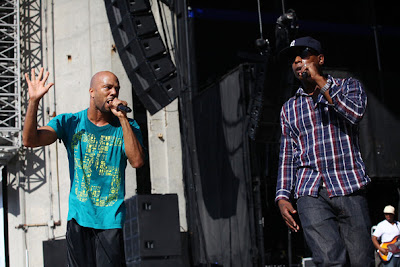 More than 10 years since their classic contribution Train of Thought sealed their fates in hip-hop lore, Talib Kweli and Hi-Tek are releasing their follow-up venture Revolutions Per Minute this May. This album is one of the most anticipated hip-hop albums of 2010.
The Source Magazine gave Revolutions Per Minute an early 4½ mic review in their March 2010 issue stating that, “While Train of Thought placed Hip-Hoppers into a soulful, spiritual trance that could be likened to Tribe’s Low End Theory, Revolutions Per Minute adopts a modern Public Enemy timbre with lyrical grace and production that doesn’t alienate.”
Aside from the denotative meaning — the number of times a record can go around on a record player — Talib Kweli explains the title is two-fold: “It’s the idea of revolution through music. It’s the idea that people in today’s culture take things in YouTube-sized bites and clips and if it’s not in a clip or a soundbite or
something that you can fit in under a minute, people don’t pay attention to it. The idea is: How many revolutions can you get accomplished in under a minute in a quick culture?”

We are giving away a pair of tickets, valued at $35 each. To enter simply retweet this link or comment on this post. Do both and get two entries. For the comment, tell me your favourite hip-hop album. For you twitter folk I’ve made it easier, just copy and paste this link:

Contest ends Monday at noon, good luck to all those that enter.