Summers in Japan are hot. I don’t mean the 27 degrees we consider to be hot here in Vancouver. I mean, properly scotching 40 degrees Celsius hot with absurd humidity. That’s why when I spent a summer there, I didn’t have too many bowls of ramen. Like pho, you just don’t want it on a hot day and pretty much every day between June and September is a hot day in Tokyo.

The Japanese figured this out long ago with zaru soba, which is cold buckwheat noodles dipped in a light sauce. It’s the perfect meal for the summer. It’s as refreshing as it is delicious and I didn’t know there was a similar ramen dish until a couple years ago. 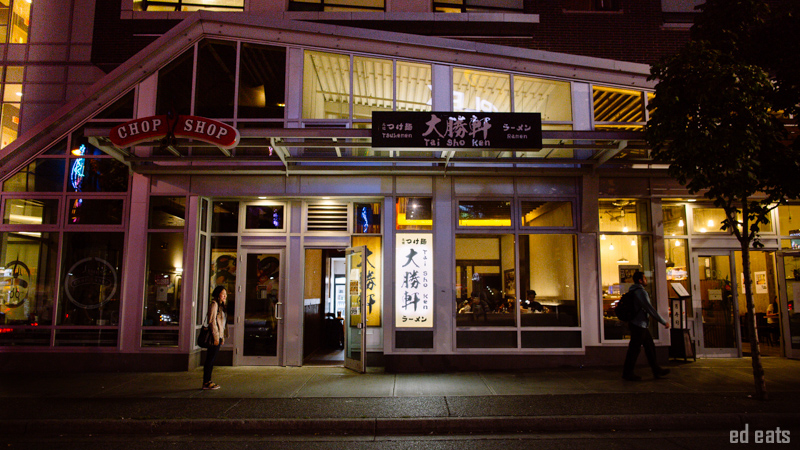 I first heard of tsukemen on Mind of a Chef, hosted by two of my food heroes, David Chang and Anthony Bourdain. Chang takes us to a little Tokyo ramen shop called Taishoken in Ikebukuro, where tsukemen came to be over 50 years ago. Chef Kazuo Yamagishi came up with tsukemen in 1961 and while he has since retired, his legacy lives on with his apprentices today. 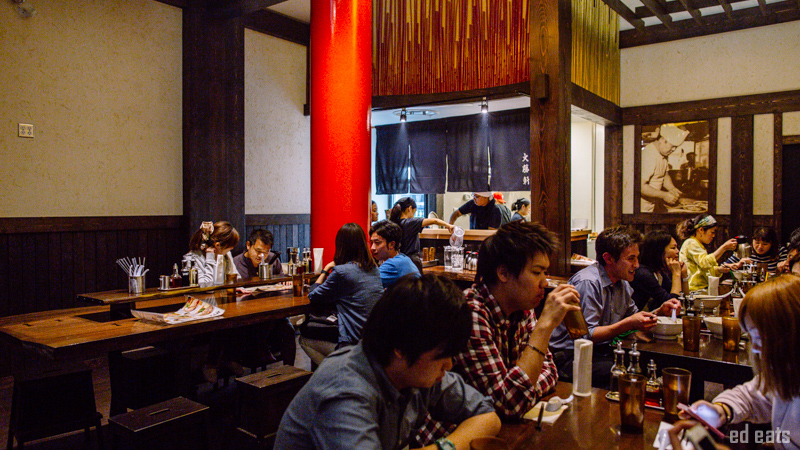 I’m not entirely sure the new Taishoken, which recently opened in downtown Vancouver (although not in the Ramen District), is in any way related to Yamagishi-san’s restaurant. Maybe someone who reads Japanese could let me know but I did spy a portrait of the man himself – complete with his trademark towel strapped around his head – on the restaurant’s walls. 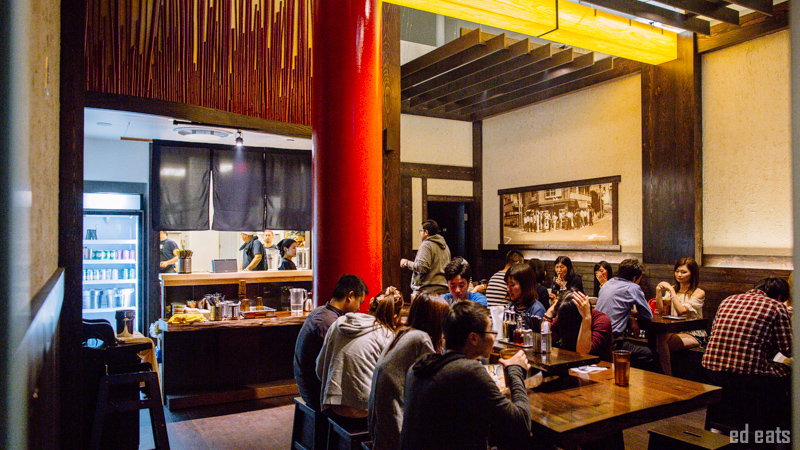 Taishoken isn’t a large restaurant, but it’s actually quite a bit larger and more comfortable than just about every other ramen shop in Vancouver. All the wood, black-and-white photos and traditional-ish Japanese decor make it look a bit more like a cozy little ramen shop, but everything is so clean and new that you just can’t forget you’re in Yaletown. 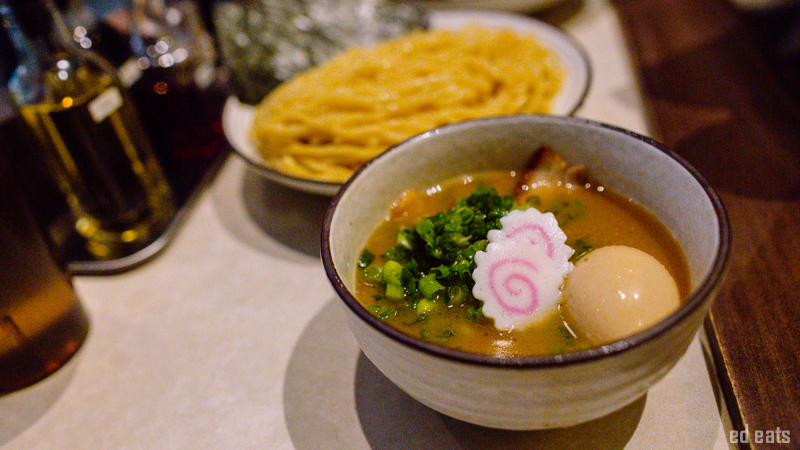 There are other types of ramen available on the menu but when you’re visiting a supposed branch of a shop that invented tsukemen, there’s really only one way to go.

Tsukemen separates the noodles and the broth. The noodles are served near room temperature while the broth is reduced 50% for a more concentrated flavor. This is a very different experience compared to just eating regular noodles-in-hot-soup ramen. The biggest difference, of course, is the temperature, but ramen lovers will also recognize the difference in texture with the noodles. Since they’re not sitting in the hot broth, they’re noticeably bouncier and chewier and they tend to stay that way longer. After having it the first time at Hokaido Ramen Santouka, I was convinced this is the best way to enjoy ramen. 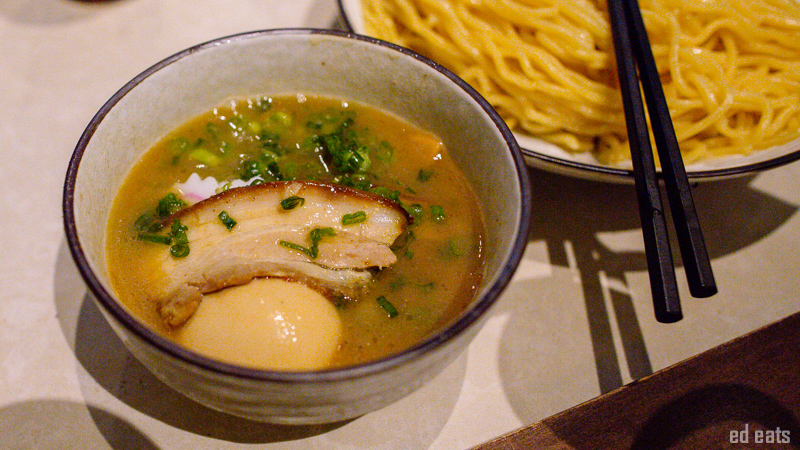 You’ve got a choice of four options for tsukemen at Taishoken, depending on whether you want the “special” or a larger portion of noodles. A regular-sized regular is $11.45 while a large “special” (additional portion of cha-shu pork and an egg) is $14.45. A large portion of noodles is about 50% more than the usual…which is already a lot. Unless you’re a big eater, the large portion is probably a mistake and you’re going to leave the restaurant with a severe case of “That ‘Itis.” I think the plate of noodles you get at Santouka, the only other place in Vancouver I know of that serves tsukemen, is a little bigger, if you’re keeping track. 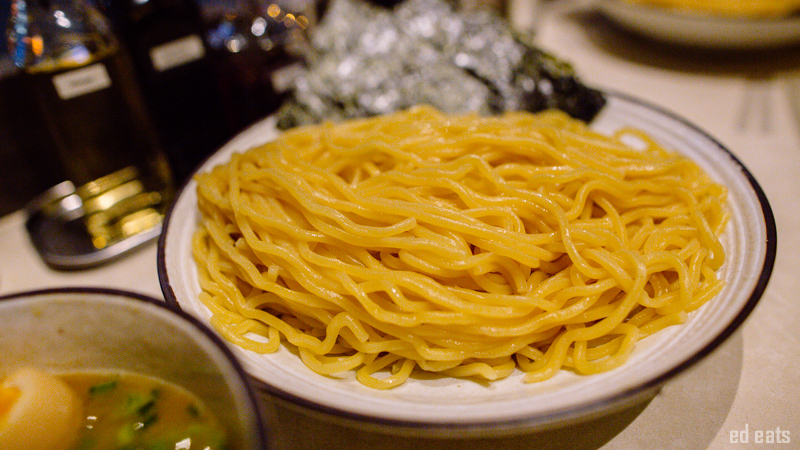 The noodles…well, they’re amazing. Seriously, they are the perfect al dente (or whatever the Japanese equivalent is) texture; the ideal amount of bite and elasticity after a quick dip in the concentrated broth. Like with all Japanese noodles, go ahead and slurp loudly. Getting some air mixed in is essential to the ramen experience. Know that all those people starring at you aren’t eating their ramen at its peak of delicious. 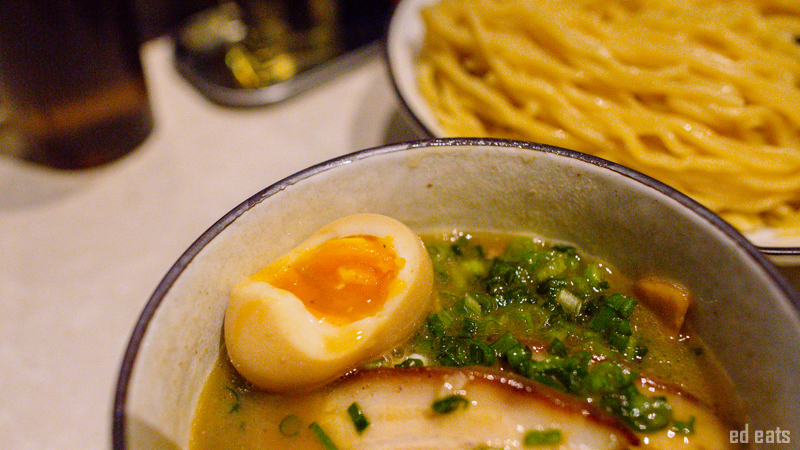 The broth is delicious. It’s hard not to make what is essentially melted down pig delicious but the broth at Taishoken has a unique taste to it. It’s a bit sweeter than you would expect with a mild nutty flavor as well. There is, of course, just a ton of rich, meaty goodness but it isn’t overwhelming because you’re just dipping your noodles in it.

The broth isn’t piping hot as you might expect. I’ve heard that some ramen places will reheat the soup for you or give you a bit of hot, unseasoned broth to supplement yours if it’s gone cold but I haven’t yet had a chance to try this myself.

The egg was above average at best. Mine was slightly over and not as runny and awesome as it could have been, but well-seasoned and still delicious. 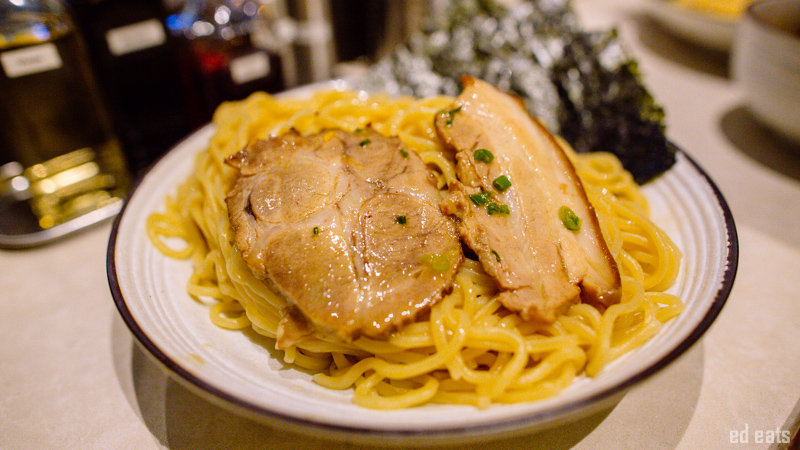 When it comes to the pork, even the “lean” isn’t all that lean, which is good or else you’d end up with rather dry pork. The cha-shu is fall apart tender but isn’t as flavorful as I had hoped. Much of the flavor comes from the concentrated broth so you’re not going to think anything is bland but the cha-shu isn’t the star of the show here.

Taishoken is a very worthy contender in the increasingly competitive Vancouver ramen business, but I think we’re still waiting for a bowl of ramen that will totally blow our minds. In the meantime, Taishoken is a very good option if you’re looking to try a new ramen place.

And if you haven’t tried tsukemen, then what better place than a shop with the man who created in the first place…even if he is just in a photo on the wall.