This Christmas, Santa was kind enough to leave us a copy of Mike Lydon and Anthony Garcia’s excellent new book “Tactical Urbanism” under the tree. Over its 200 pages, the authors chronicle the rise of short-term, low-budget, community-based projects that are having long-term affects on the way we think, move, and feel about our cities.

Rather than write a traditional review of the book (which, by the way, we would highly recommend), we thought it would be a much more interesting and enjoyable exercise to revisit the most memorable instances of tactical urbanism in Vancouver. Many of these seemingly brief additions are having longstanding, meaningful impacts on our streets and our people. 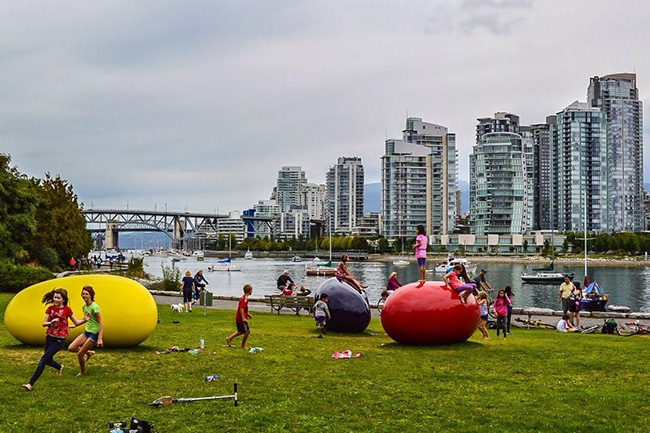 Every two years, the non-profit Vancouver Biennale transforms the entire city into an outdoor art gallery. While many of these sculptures are designed to be temporary installations, the most engaging and popular pieces – through the generous donations of Vancouverites – become a permanent and beloved part of the public realm.

2. Keys to the Streets 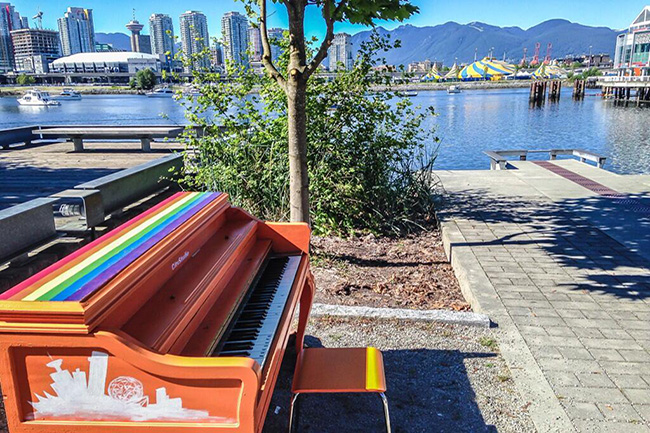 The origins of the Keys to the Streets program can be traced back to a single piano dropped in Mount Pleasant’s Robson Park in 2013 by a group of CityStudio students. Since then, the donated pianos have spread to 10 sites across Vancouver, creating impromptu gatherings and performances that have evolved into an iconic part of summer in the city. 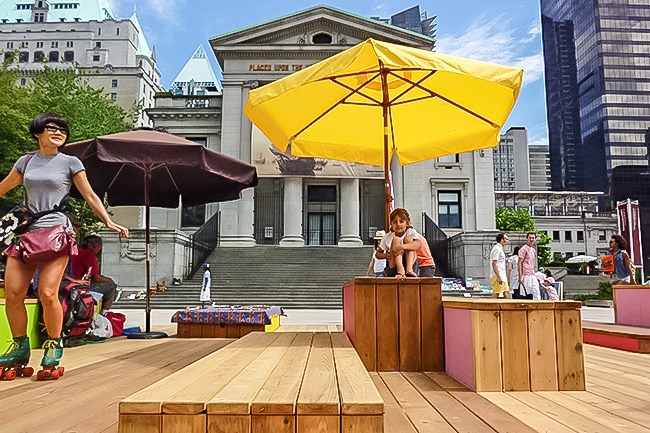 A remnant of the 2010 Olympic Winter Games, closing the 800-block of Robson Street to cars and buses has occurred every summer since, with a series of pavement-to-plaza installations such as bean bag chairs and wooden benches. They have demonstrated the demand for better public space in this city, leading to the redevelopment of the Art Gallery’s North Plaza. 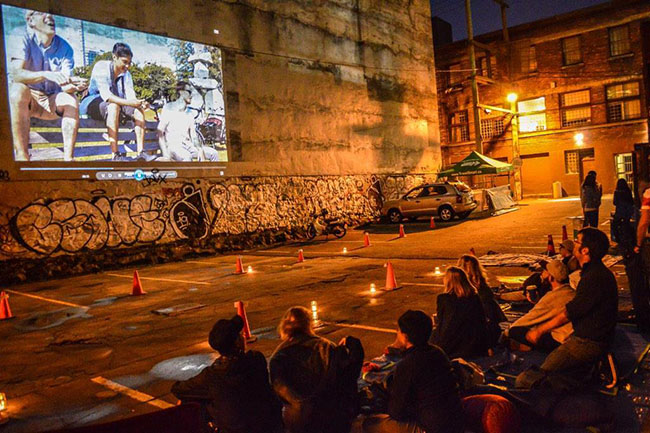 Since September 2005, Park(ing) Day has spawned single-day interventions in cities around the world that aim to shine a light on the amount of space we commit to automobile storage. The Vancouver Public Space Network leads local efforts, including a 2014 event that converted an entire Downtown Eastside parking lot into an open-air, bike-in cinema. 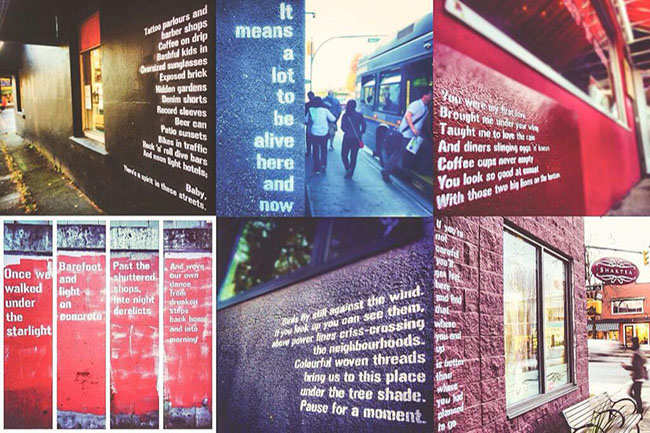 When done in a meaningful manner, street art provokes thought, and rewards those who move about the city at a slower pace. The Main Street Trail project – initiated by a group of poets in Mount Pleasant – had our family scouring the length of Main Street (by foot and by bicycle) for several weeks in the summer of 2013, in search of the newest poem. 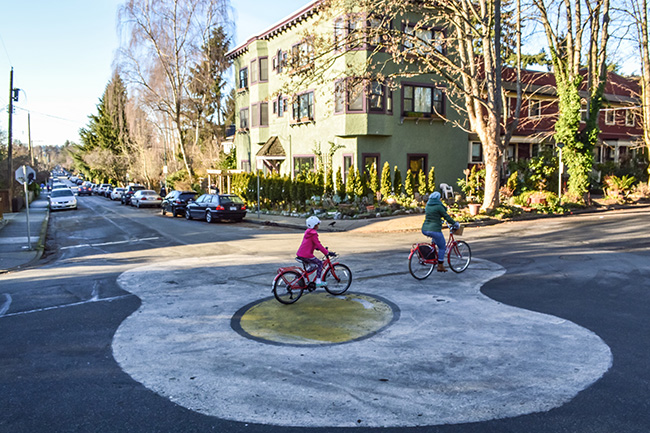 The intersection intervention movement grew out of a group of Portlanders’ frustration with their city’s inability to address decades’ worth of dangerous street design. It landed in Kitsilano this past summer, when a group of locals painted a giant fried egg at 5th & Trafalgar, in order to draw the curiosity of speeding drivers and slow them down.

7. The rise of the parklet 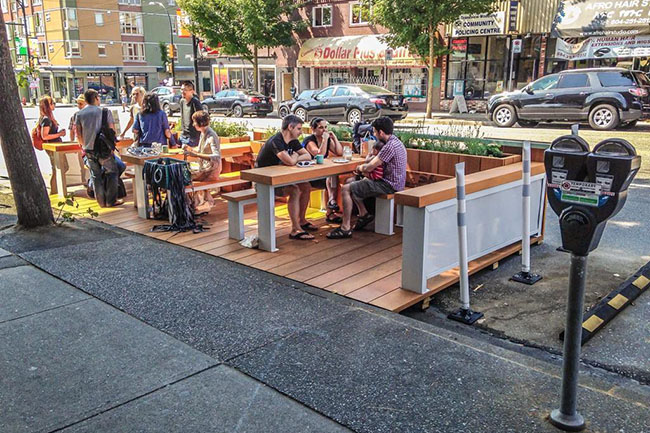 Defined as the conversion of a metered parking space into a temporary public park, the parklet is Park(ing) Day’s most meaningful legacy. In Vancouver, short-term installations outside The French Quarter on Main Street and Prado Café on Commercial Drive have both led to the construction of community-funded, permanent patios. 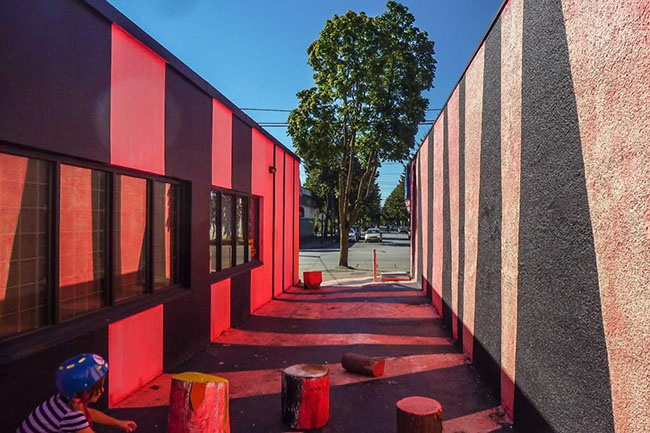 Alleyways are another otherwise wasted space waiting for reclamation, with little expense or possibility of controversy. This particular alleyway – off of Fraser Street in South Vancouver – cost little more than a few tins of paint, and provides a secure, visually appealing, much-needed social gathering place for adults and children alike. 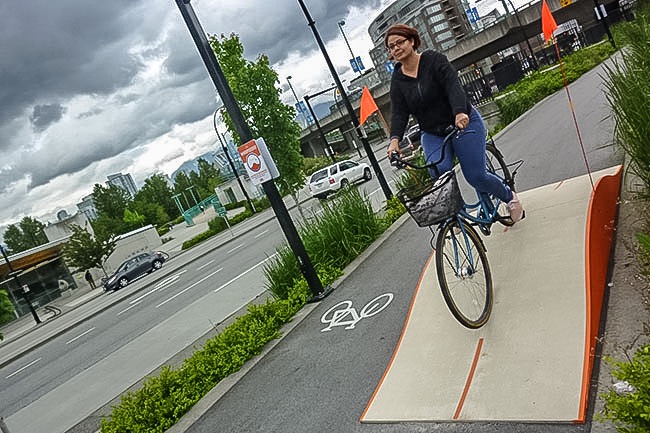 Local artist Greg Papove took advantage of a Penny Smash grant to build this awesome five-day installation during the Bike to Work Week of summer 2014. Placed across the street from the Olympic Village Skytrain Station, it added a bit of fun to the daily commute of cyclists by giving them a brief ‘Whoopdeedoo’ moment. 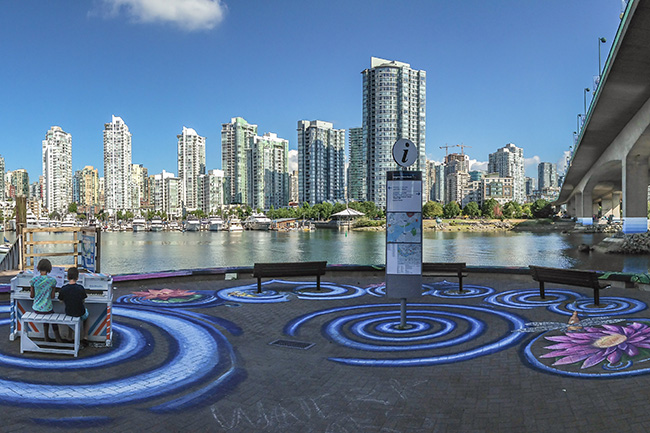 Another vestige of the CityStudio program, Spyglass Place was the site of a beautiful community mural in August 2014. This wonderful placemaking exercise was lead by a group of students and local artist Emily Gray, who – in combination with a public piano – transformed it into one of the most interesting public spaces along the south seawall.

The beauty of tactical urbanism lies in the fact that is it accessible to anyone. It encourages every citizen with a little creativity and a little enterprise to hack their city. So if you’re feeling inspired, or frustrated with a particular aspect of your neighbourhood: just build something. It may end up permanently shaping your streets for the better.