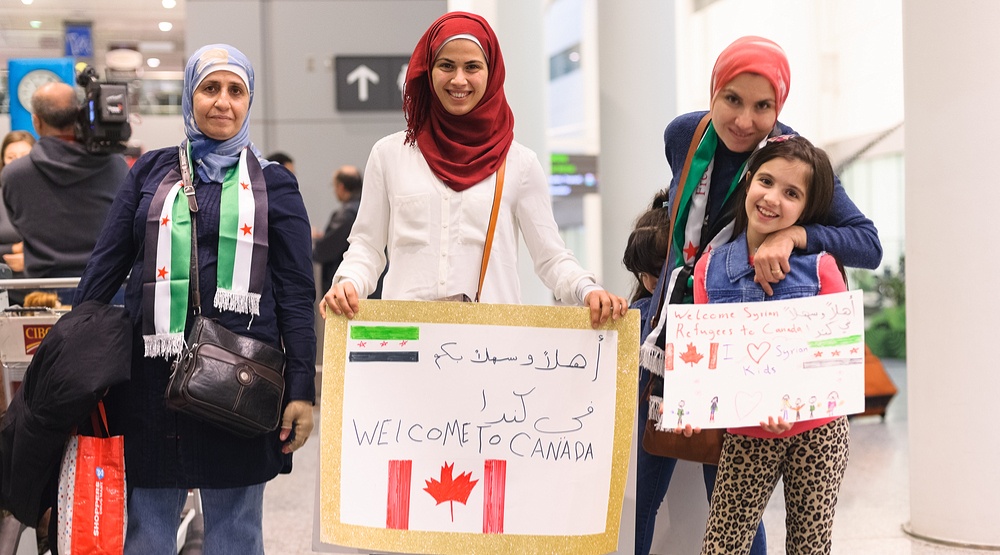 Seriously, it’s been a non-stop procession of bad news. A hot mess of horrific headlines from Trump to Brexit, via a procession of celebrity deaths including Bowie, Ali, Prince, and Gordie Howe.

Which is why, when something we can actually feel a little good about comes along, we should all take a moment to appreciate it.

One such nugget of niceness appeared today in a report from ISSofBC – an organization which has been providing support services to immigrants since 1972. The report marked the first year of Syrian refugees’ arrival in BC. In it, the organization asked 60 youth and more than 300 households about their experiences during their first year in Canada.

There are many findings in the report (more on that below) but the line that stands out comes from an open-ended question that ISSofBC posed to Syrian refugees in BC.

The question enabled the respondents to state anything they’d like, and 85% of them simply wanted to say “thank you.”

And in a year full of depressing headlines and divisive political rhetoric, that’s worth stopping to think about.

Of course, not all of the findings were positive. Starting a new life in another country can be extremely difficult; especially if you’re unfamiliar with the culture, language, and laws.

That’s why ISSofBC is there to help, and their findings show that after one year, many of BC’s Syrian refugees are making impressive progress.

For example, 76% of those questioned are currently attending a federally funded English language class for newcomers to Canada, while another 20% have taken – or are taking – education in something other than English.

Less than one year after their arrival, 17% of respondents are employed on a full-time or part-time basis, while 64% of those who are not working are actively looking for employment.

Children are also doing well, with 51% of those questioned reporting that their children were doing excellent or very good in school.

Some of the quotes captured in the report reinforce this positive message.

“We feel that we are all equal here regardless of religion and ethnicity; we are respected regardless of our backgrounds,” says one.

“We want to care about Canada like our own country,” says another.

While another simply states, “Thanks for giving us a safe life.”

The report itself sums it all up very nicely.

“This year alone over 44,800 resettled refugees will settle in this country through Canada’s humanitarian immigration stream,’ the report states. “The response from Canadians towards refugees has been extremely positive, unleashing a wave of compassion and humanity unseen in recent years.”

It’s not all good news

Sadly it’s not all good news, and refugees have faced plenty of challenges as they attempt to settle in BC.

When asked about their family’s emotional health, 16% of respondents indicated that overall their family felt depressed and 14% reported as sad.

Furthermore, 66% of people said they regularly use the food bank and 74% of respondents indicated that they had immediate family members that they wanted to be reunited with in Canada.

Some of the statements from those people questioned sum up the difficulties of moving to BC.

“I hope with all my heart that the Government brings my children to Canada,” reads one.

“I am desperate for help,” reads another. “I take care of my sick mother and I need my brother to come to Canada from Jordan to support me as soon as possible.”

Many are also battling with the situation back home in Syria.

One particularly heart-wrenching entry says their greatest challenges is “learning how to cope with negative thoughts and sadness after losing our country, losing loved ones and losing stability is difficult.”

Despite the ongoing concerns, the conclusion of the report draws positives from the Syrian refugee resettlement program, which is the largest in Canadian history.

“While most Syrians, if given the choice, would return to their homes if they could, they are nonetheless tremendously grateful to the Government of Canada and Canadians, in general, for providing them safety, hope, and the ability without fear to rebuild their lives in this country,” it states.

“They want Canadians to know that they see and treat this country as their home and as such, they are striving to work, contribute and build a better future for themselves and their children. They will cherish for the rest of their lives the tremendous kindness and generosity from Canadians who opened their door to them when other countries turned their back.”