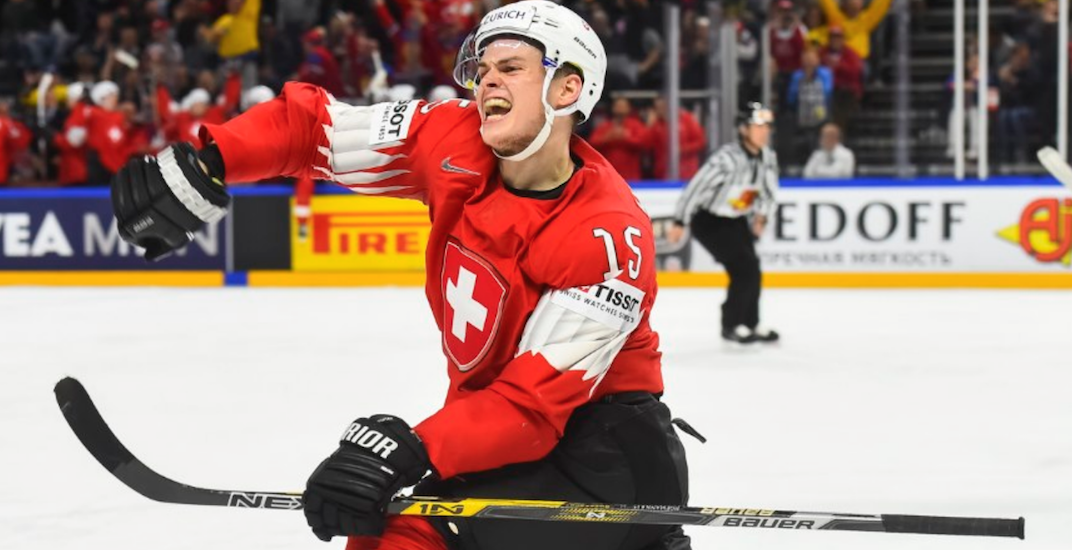 What is it about the Swiss?

For whatever reason, the emerging hockey nation always seems to give Canada trouble in international competition, despite a huge talent discrepancy.

That was the case once again at the IIHF World Championships in Denmark on Saturday, as Switzerland upset Canada 3-2 in the semi-final. Canada will play USA for bronze on Sunday, while the Swiss will face Sweden in the gold medal game.

Switzerland’s best player was their goaltender, Leonardo Genoni, who stopped 43 of 45 shots he faced. The Swiss were full marks for their first goal though, as Tristan Scherwey scored to take a 1-0 lead in the first period after sustained pressure on Canadian goaltender Darcy Kuemper.

Vancouver Canucks centre Bo Horvat, who was named Player of the Game for Canada, levelled the score midway through the second period.

.@Canucks forward Bo Horvat snaps one home for his 3rd goal of the tournament to tie it up for Team 🇨🇦 (@HC_Men) at 1-1.#IIHFWorlds🇨🇦#Canucks🏒 pic.twitter.com/fJTzcCTOx9

Canada got better as the game went on, but Switzerland was opportunistic. They scored on two of their three power play opportunities – with goals from Gregory Hofmann and Gaetan Haas – giving themselves a 3-1 lead in the third period.

Team Canada poured on the pressure in the third, outshooting their opponents 18-1, but only St. Louis Blues defenceman Colton Parayko was able to beat Genoni, cutting the lead in half with just over two minutes left to go.

Colton Parayko makes it a one-goal game with just over two minutes to play.#IIHFWorlds🇨🇦🏒🇨🇭 pic.twitter.com/GqYremIEOz

Despite furious pressure in the Swiss end in the final two minutes, Canada was unable to find the equalizer and thus won’t play in the gold medal game at this tournament for the first time since 2014.

“We came out flat,” Team Canada captain Connor McDavid told TSN after the game. “They capitalized early. They didn’t have many chances after the first, but the ones they did, they bared down on.”

Switzerland is now guaranteed to win a medal at the World Championships for just the second time since 1954. The Swiss earned silver in 2013, but they’ve never won gold at the Worlds.