When I got the opportunity to review Sweeny Todd, I was ecstatic.  I’m a huge fan of Stephen Sondheim, and I remember hearing rave reviews of the production starring the legendary pairing of Angela Lansbury and Len Cariou that took Broadway by storm back in 1979. I was prepared to be blown away, and just slightly repulsed by the Demon Barber of Fleet Street.

That is, till real life got intervened. But more of that in a minute.

The story itself a bit complicated. Sweeney Todd is an ex-con from an Australian penal colony who is back in London after years in exile. He’s befriended by Anthony, a young sailor, who hears Sweeney’s heartbreaking tale of a barber who was sent to prison by a powerful man who desired his wife. Of course, Sweeney is that very man, Benjamin Barker – but Anthony doesn’t connect the dots. However, a sad and bedraggled beggar woman accosts them and seems to recognize Sweeney/Barker.

Sweeney enters a run-down pie shop and encounters Mrs. Lovett, who recognizes him as Barker and tells him that his beautiful wife Lucy is dead and their daughter Johanna is the ward of Judge Turpin, who had tortured Lucy into insanity and caused her to poison herself. Mrs. Lovett surprises Sweeney with his old silver shaving razors, and Sweeney vows to use them to get his revenge. 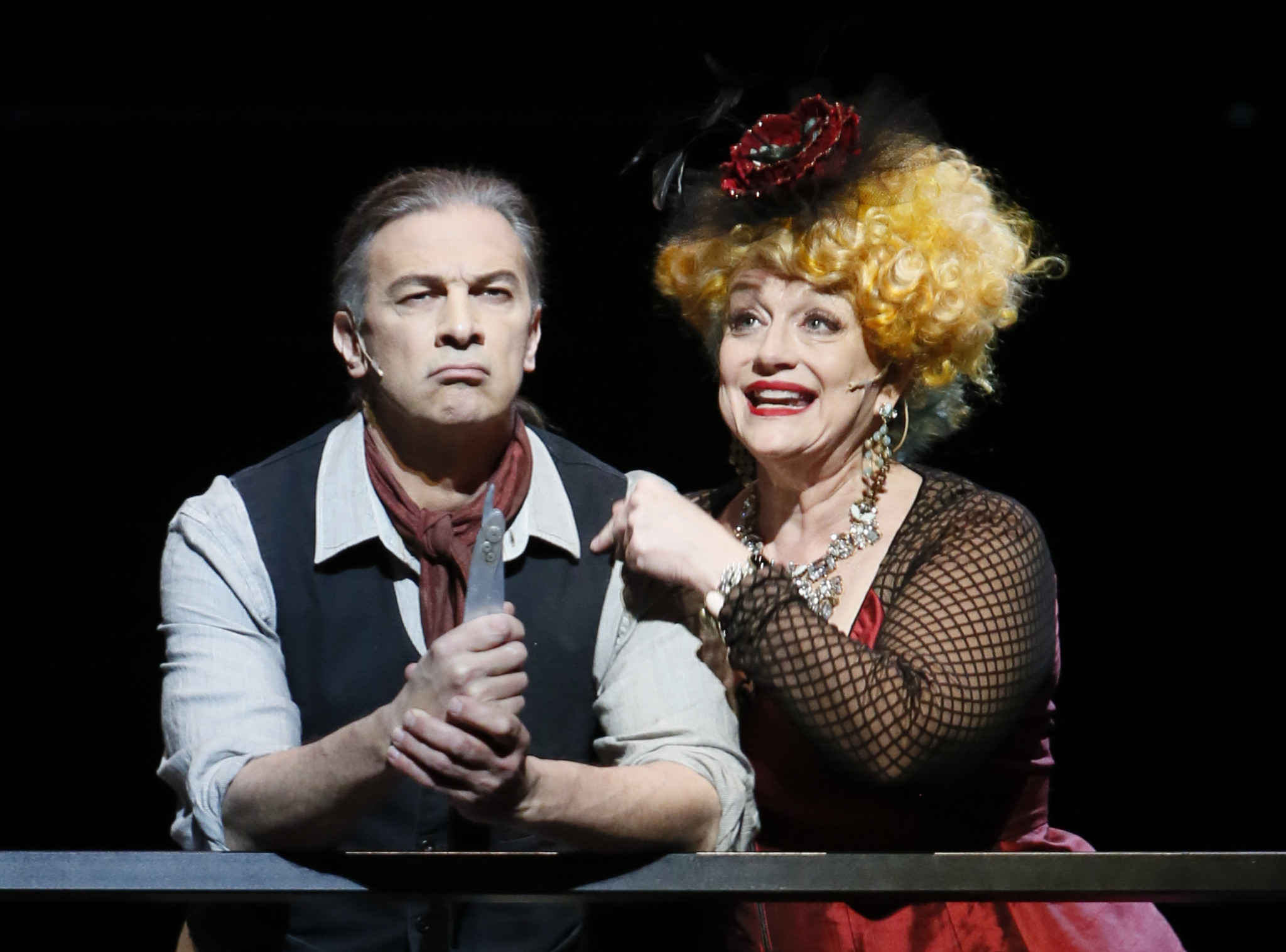 Meanwhile, Anthony happens to wander by Judge Turpin’s house and falls immediately in love with Johanna and resolves to remove her from the Judge’s grasp and run off with her. He is warned by the Judge and his sidekick the Beadle to stay away, but Anthony won’t back down.

In town, Sweeney challenges an Italian barber to a competition and exposes him as a fraud. The faker, who is neither Italian nor a barber, later confronts him and tells Sweeney that he knows he is Barker and demands a share of his earnings. Instead of giving in to blackmail, Sweeney kills him. Just after the murder, the Judge arrives for a shave and tells Sweeney that he’s going to marry Johanna in a matter of days. But before he can slit the Judge’s throat, Anthony bursts in and blurts out his plan to save Johanna. Sweeney loses his chance at revenge as the Judge storms out. Sweeney then swears to kill as many people as possible – and he and Mrs. Lovett decide that they’ll dispose of the bodies by using the meat for her pies. 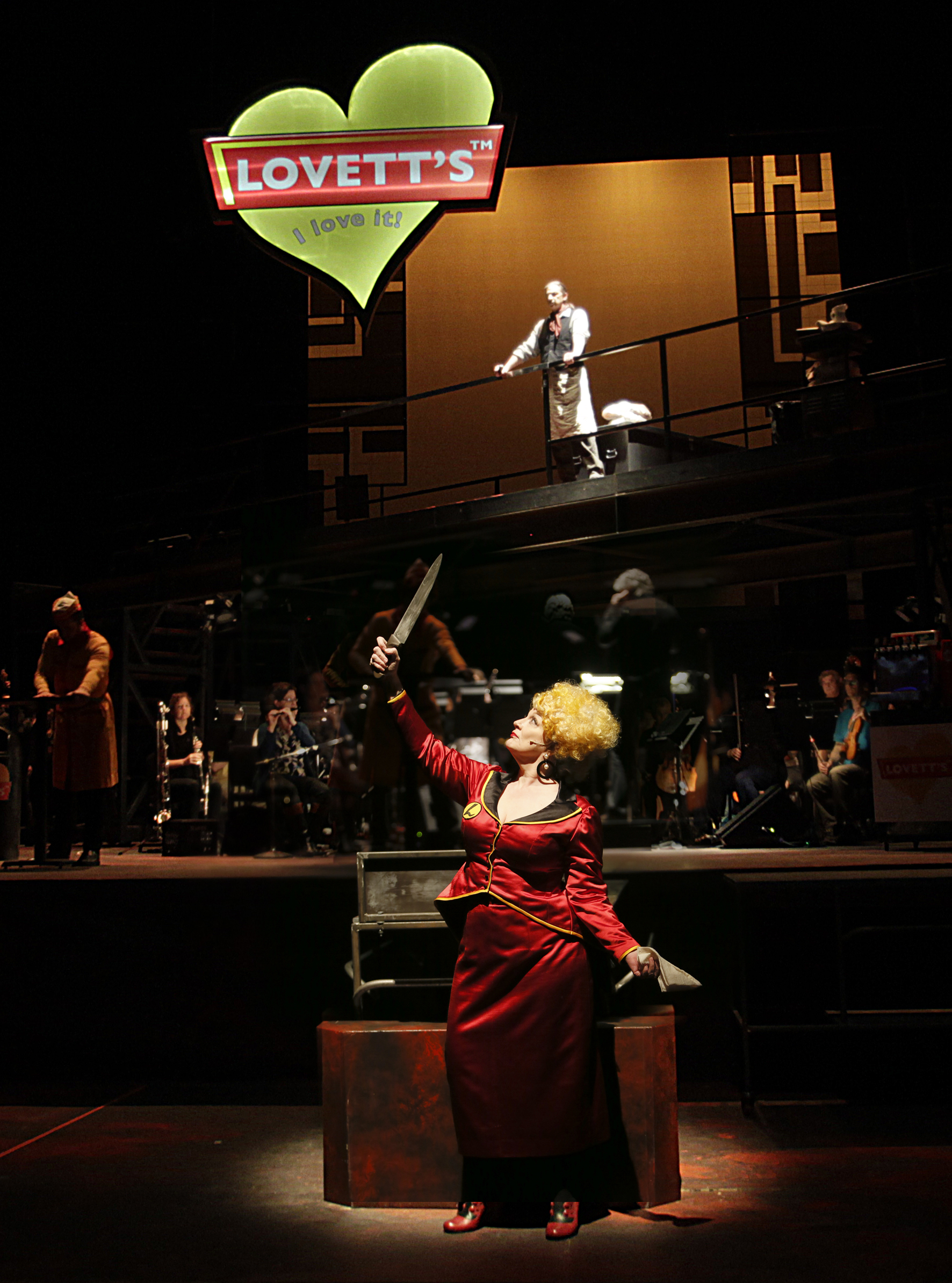 Mrs. Lovett’s pie shop is soon bustling. The fraud’s young assistant Toby is now working for Mrs. Lovett, and Sweeney has a brand new chair with some special modifications – sending many poor fellows down a chute in the basement, where they become someone’s next meal. But Toby is getting suspicious, and Mrs. Lovett lures him to the basement bakehouse  and locks him in. Beadle is also wary, and arrives to investigate the strange smells and smoke coming from her chimneys. Sweeney offers the Beadle a free shave – and when his body tumbles dow the shaft into the basement, Toby realizes what’s been happening and runs off in horror.

As if that weren’t enough drama, Anthony frees Johanna from an insane asylum where the Judge has imprisoned her, and leaves her at the barber shop while Sweeney and Mrs. Lovett frantically search for Toby. The beggar woman comes into the shop, and Johanna hides.  Just before the Judge arrives looking for Johanna, Sweeney kills the beggar woman, and when the Judge sits in the chair Sweeney finally gets his revenge and kills him too. 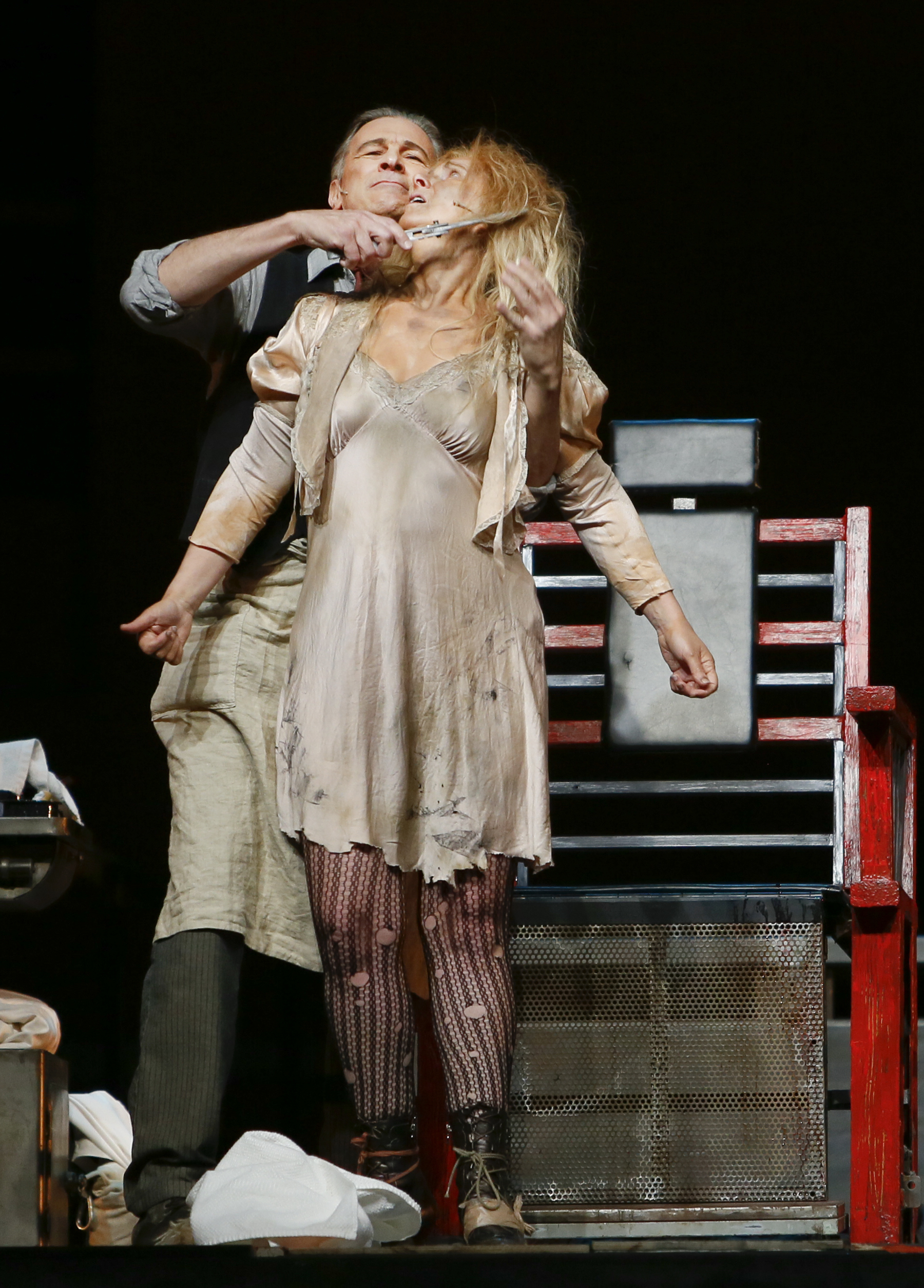 Sweeney descends into the basement to dispose of the bodies and realizes that the beggar woman he killed was his precious Lucy, and that Mrs. Lovett had known all along that she was alive. Sweeney then shoves Mrs. Lovett into her own oven.

As Sweeney kneels on the floor holding Lucy, Toby slits Sweeney’s throat just as Johanna, Anthony, and the police enter.

It’s a great story. But back to real life.

From the very beginning, something didn’t seem right. The sound seemed muddy, and I had a great deal of trouble understanding what the chorus was singing and had to resort to reading the surtitles with my monocular, which took my gaze away from what was happening on stage. Rocco Rupolo’s Anthony was passionate enough, but his voice was often drowned out by the orchestra on stage, and I couldn’t understand what Johanna (Caitlin Wood) was singing. Again, I relied on the subtitles – something I had not expected to do during an English production.

What disappointed me the most – and I wasn’t alone, based on comments in the lobby at intermission – was the performance of Greer Grimsley as Sweeney Todd. The return of the bass-baritone to Vancouver Opera had been much touted in the days leading up to this Opening Night, and shortly into his performance, that deep voice suddenly changed, and he was lip-synching all of the songs. The mood of the audience changed. There was much less applause than during a typical performance.

It was only after intermission, that we were given an explanation – unfortunately, Mr. Grimsley had come down with a bad virus and could not sing. Luckily, the Opera was forewarned, and award-winning artist George Masswohl had been flown in to perform behind-the-scenes – but not on stage. Hence, the lip-synching, and totally different singing voice.

Once everything was explained, the second act picked up significantly, and the story built up to a more entertaining conclusion, although the surtitles remained my friend more than I would have liked. The set was fantastic, and that chair was an engineering marvel. You couldn’t help but get a little thrill every time that trap door opened and another body landed in the basement with a thud. I was less annoyed, and felt really sorry for everyone on stage and behind the scenes. I hope that for everyone’s sake, Mr. Grimsley regains his voice for the rest of the performances. I just wish we all could have heard him at his best.

There were two performances that saved the day for me. Luretta Bybee’s Mrs. Lovett was nothing short of perfect in an imperfect situation – she was in great voice, and was funny and expressive. She injected life and laughter all the time she was on stage. And poor terrified Toby, played believably by Pascal Charbonneau, was terrific. Bravo to them both. Kudos too to Mr. Grimsley, who carried his evil character through what have been a very tough evening. And hats off to Mr. Masswohl, who certainly had one of the most difficult and demanding roles of the night.

There are four more performances at the Queen Elizabeth Theatre – Thursday April 30, 7:30pm, Friday May 1, 7:30pm, Saturday May 2, 7:30pm and Sunday May 3, 2:00pm. Tickets are available at the Vancouver Opera website.

I’m anticipating that everyone will be in fine voice, and a lot of the bugs we had to experience will be sorted out – so go! And if you’re lucky, the Aussie Pie Guy food truck will be outside, selling (what else?) pies!