The City of Surrey’s unwillingness to permit the iconic rainbow LGBT flag to be flown at City Hall is once again making waves in and around the densely populated community as Pride Week approaches.

The annual celebration is observed this year in Surrey June 28, and culminates in the Surrey Pride Festival on July 6.

Earlier this year, Surrey was scrutinized for opting not to join other Canadian cities in flying the well-known rainbow striped flag during the 2014 Winter Olympics in support of gay athletes. Surrey, however, has remained staunchly committed to keeping the flags flown outside their new City Hall to three: National, provincial, and city. Well, except when they break their own rules to add a fourth, like in 2010, when they managed to find room for the Olympic flag on their flagpoles. 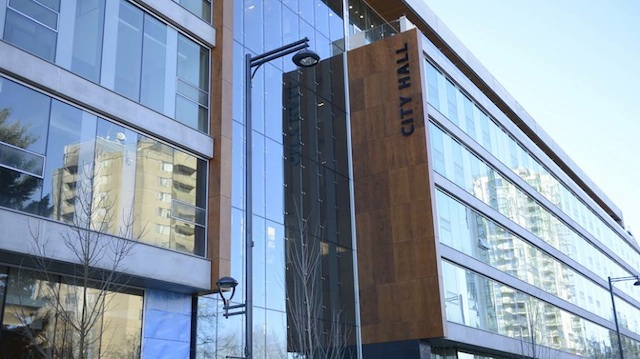 Rooney says Surrey claims “federal flag protocol” prohibits them from adding a fourth flag to the flagpoles, however Rooney observes that in other cities, the solution has been to simply fly the rainbow flag beneath the city flag on a shared post.

Currently a report on “proper protocol” for flags is awaiting approval by Surrey City Council; the report is posted on the Encourage Surrey BC City Hall to fly the Pride Flag Facebook page.

Social media has played a crucial role in the movement to urge Surrey to allow the LGBT flag to be flown during pride week; Rooney says he did not hear back from Surrey officials until he hashtagged Surrey Mayor Dianne Watts in a tweet from his personal Twitter account. Watts’ reply was “that there was never a refusal to fly the pride flag, (but) there was never a formal request to do so,” Rooney told The Now.

The matter goes before the Surrey City Council tonight, and while Rooney said today he was “hopeful” he was also “realistic” about the outcome.