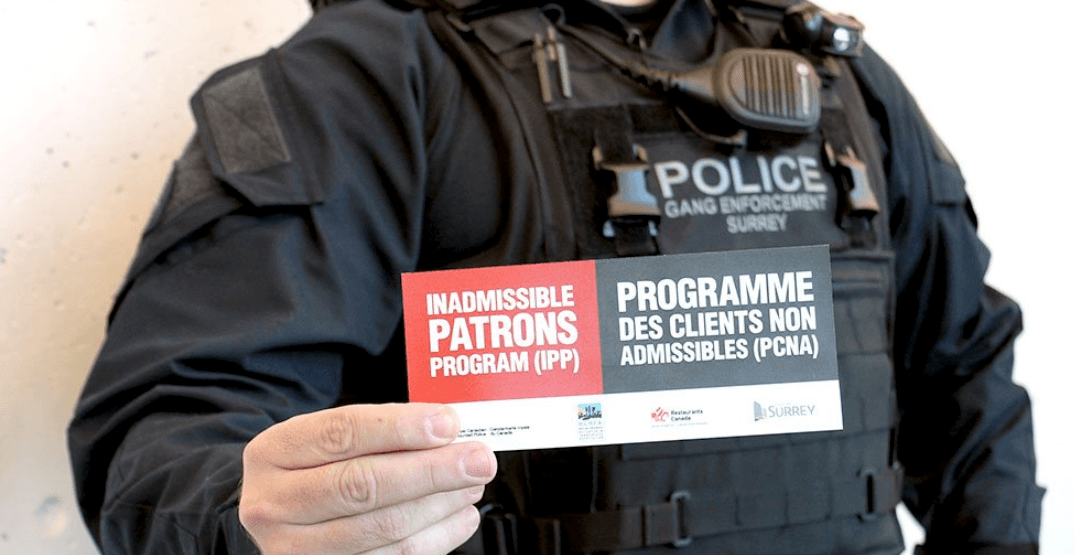 A new program is launching in Surrey to prevent gang and criminal activity in bars and restaurants.

The Inadmissible Patrons Program (IPP) was developed by the Surrey RCMP Gang Enforcement Team and is supported by the City of Surrey and BC Restaurant, Food Services Association (BCRFA), and Restaurants Canada.

IPP aims to increase public safety in and around licensed establishments by granting police the legal authority to remove individuals who are deemed as “inadmissible patrons,” from bars and restaurants participating in the program.

According to Surrey RCMP, an inadmissible patron is defined as an individual who is involved in organized crime, gangs, and drug trade.

“It has been made abundantly clear to me that Surrey residents want positive action on gangs and gun crimes,” says Mayor Doug McCallum, in a release.

“The Inadmissible Patrons Program will not only identify gang members and individuals associated with violent crime, but the program will also allow for police to remove them immediately from the premises. As seen in other jurisdictions, this program will make it tough for criminals to do business in our city.”

The IPP is modelled after the Vancouver Police Department’s Restaurant Watch Program and will gradually be rolled out this week with eight bars and restaurants participating in the initial launch.

Surrey RCMP told Daily Hive that patrons to these businesses will be able to identify what restaurants and bars are participating with a decal that will be on display.

“The Surrey RCMP want to keep the focus on the program and not turn the focus on any one business,” said Sgt. Chad Greig in an emailed statement.

Assistant Commissioner Dwayne McDonald of Surrey RCMP says the program will send “a clear message to gang members that they are not welcome in Surrey.”

“This program also gives our Surrey Gang Enforcement Team an additional point of contact with gang members so we can continue to make it uncomfortable for those involved in organized or violent crime to be in this city.”

The Surrey RCMP also has plans to expand IPP to major public events in the city and other types of businesses.