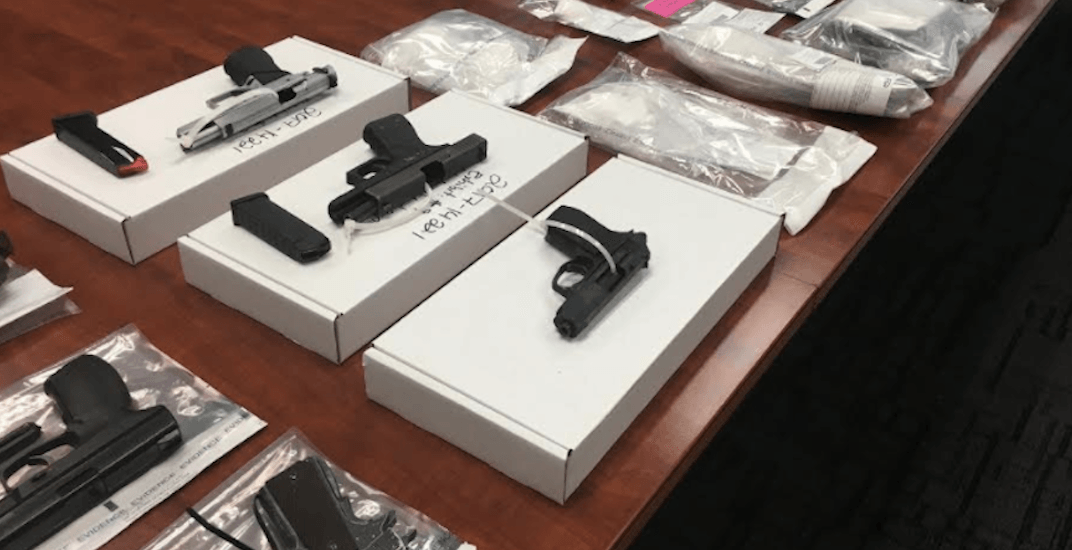 Some of the items that were seized after a months-long police investigation in Surrey. (Surrey RCMP)

Back in February, Surrey RCMP’s Drug Section launched an investigation into a local criminal network distributing drugs throughout the Lower Mainland.

“This network was preying on those most vulnerable in our community, including those living on 135 A Street, and was profiting from the opioid health crisis affecting the entire region,” said Surrey RCMP Cpl. Scotty Schumann in a release.

As a result of this long term investigation, four search warrants were executed on August 16th and August 17th in Surrey (South Surrey, Guildford), Langley, and Delta.

As a result of the investigation, approximately 30,000 doses of cocaine and almost 4,800 doses of heroin/fentanyl were seized.

“These drugs would have likely been sold to thousands of different drug users,” said Schumann.”These seizures will have a significant impact on this criminal network’s ability to distribute illicit drugs.”

The searches and seizures also led to the arrest of four individuals, who are all now facing a series of charges (48 in total) in connection with the case.

The suspects – along with their charges – include:

Police are also appealing to the public for help in finding a fifth suspect in the case: 28-year-old Dominic Graham Robert Lastoria, who has been charged with 11 counts of Possession for Purpose of Trafficking.

This long-term drug investigation also follows similar enforcement efforts by Surrey RCMP earlier this year which resulted in arrests and charges of drug traffickers who were supplying drugs to the 135A Street area.

“Our officers have been diligently working behind the scenes developing intelligence and proactively targeting individuals involved in the street level drug trade,” said Surrey RCMP’s Officer in Charge, Dwayne McDonald.

“While this investigation is not tied directly to our ongoing shots fired investigations, these arrests and seizures are part of a wider, long-term effort to reduce the prevalence of drug trafficking in our communities and the resulting violence.”