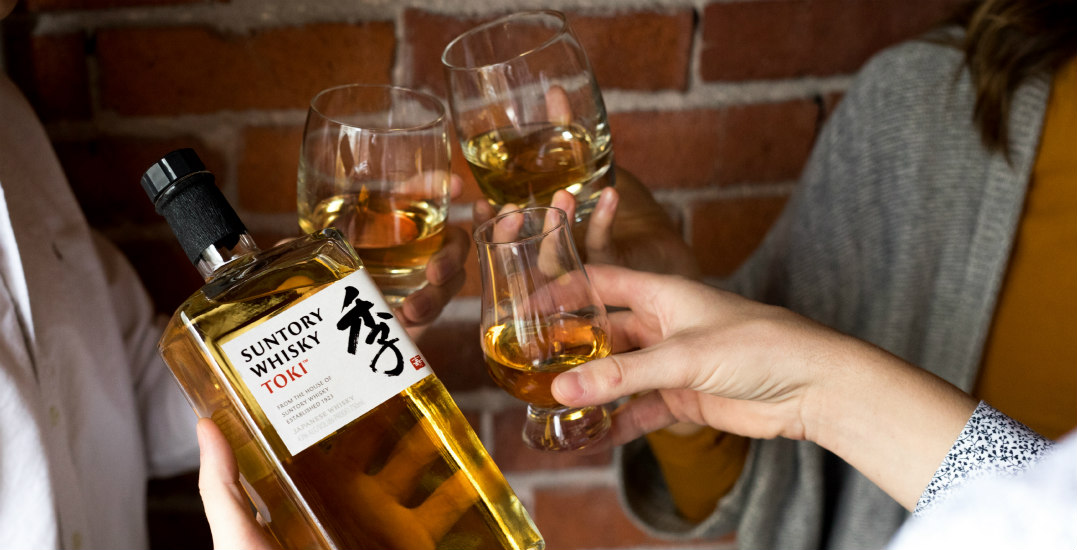 It’s holiday season, which means two things: Gift-giving and social gatherings. And since it’s apparently an unwritten law that everyone gifts a bottle of wine to the host while visiting (#adulting), you can expect to be practically drowning in libations by January.

But what if you want to stand out from the pack? There are bound to be people in your life who deserve better than whatever bottle of wine looked nice (and was also under $20 bucks at the BCLS).

If you want to give something this holiday season that will stand out as a present, or if you’re simply looking for a new way to get cozy during the chilly nights, we have a drink for you.

We teamed up with the experts at Suntory Whisky to tell you everything you need to know about Toki Japanese Whisky, and why it’s about to become the gift item of the season.

If the centuries-long history of single malt scotch has intimidated you in the past, the history of Suntory Japanese Whisky is a bit more contemporary. Almost 100 years ago, a man named Shinjiro Torii envisioned a whisky filled with the essence of Japanese nature, hand-crafted by artisans. He dreamt of creating a whisky so refined, subtle, and complex that it would complement the Japanese palate and elevate dining experiences.

Yes, Suntory was initially inspired by traditional single malt scotch whisky, but Torii sought to create something different with a Japanese-made blend cultivated in the region of Yamazaki, outside Kyoto. This region would soon become the birthplace of Japanese whisky.

What makes Japanese whisky different are the materials used and the locations of each distillery. By using Japanese spring water and ageing things in Japanese wood, as well as the unique climate regions found all across Japan (tropical weather in the south, frigid mountains in the north), Japanese whisky will surprise you with the amount of light, varied flavours it can offer.

What to expect from your first glass

If you’ve never tried Toki Japanese Whisky before, you’re in for a treat. It’s modelled after single malt scotch, so there are a lot of similarities when it comes to single malts, but with a flavour twist that’s uniquely Japanese.

Right out of the bottle, Suntory’s Toki Whisky looks like liquid gold. It isn’t overpowering like a single malt, or mixed to the point of tasting generic like so many other blends. It respects tradition and challenges convention by rethinking the hierarchy of its components. The distiller often blends Yamazaki malts as their key component.

Overseen by third-generation Master Blender and great-grandson of the founder Shingo Torii, the House of Suntory’s fourth chief blender, Shinji Fukuyo, took a fresh approach with Toki by selecting the singular Hakushu American white oak cask malt whisky (freshness, mellowness, and green apple notes) as one of the blend’s two pillars. Fukuyo chose a Chita heavy-type grain whisky as the blend’s second pillar, adding a clean taste with notes of sweetness and vanilla.

By pairing these seemingly dissimilar but deeply accordant whiskies, Fukuyo’s insight overturned the old relationship between malt and grain and created a blend that is both groundbreaking and timeless.

It’s unlike anything you, or your loved ones, have tasted before. Which is why it’s in high demand.

Why Japanese whisky is becoming harder to find

In short: Japan is running out of whisky. Due to factors like increased domestic and international demand, supply shortages stemming from downsizing in the 1980s, and the fact that the world as a whole is realizing how good it is, Japanese whisky is becoming a rare sight on liquor shelves.

Certain blends of Japanese whisky, like the Suntory Hibiki 17 made famous in Lost in Translation, are set to be discontinued forever. In every possible way, Japanese whisky is becoming better and harder to find with every passing year.

Which is why it makes for the coolest possible holiday gift. It’s delicious, stylish, and rare. If you roll up with a gift box full of Toki, you’ll impress.

So if you want to treat your loved ones (or just yourself) to something rare and unique, check out Suntory Whisky Toki and get ready to become yet another Japanese whisky convert.