Despite being ignored by critics and industry awards, Suits has clearly found a strong and devoted audience. Sharp dialogue and intrigue played out by good-looking men and women in sharply tailored suits, the drama doesn’t take itself too seriously and is back up by a strong supporting cast. Fan favourite Louis Litt (Rick Hoffman) has seen his role greatly expanded in the later seasons, and managing director Jessica Pearson (Gina Torres) is always a pleasure to watch.

So Suits returns triumphantly this week, looking and acting like nothing else in its category. Here’s a look back at where things left off last season. 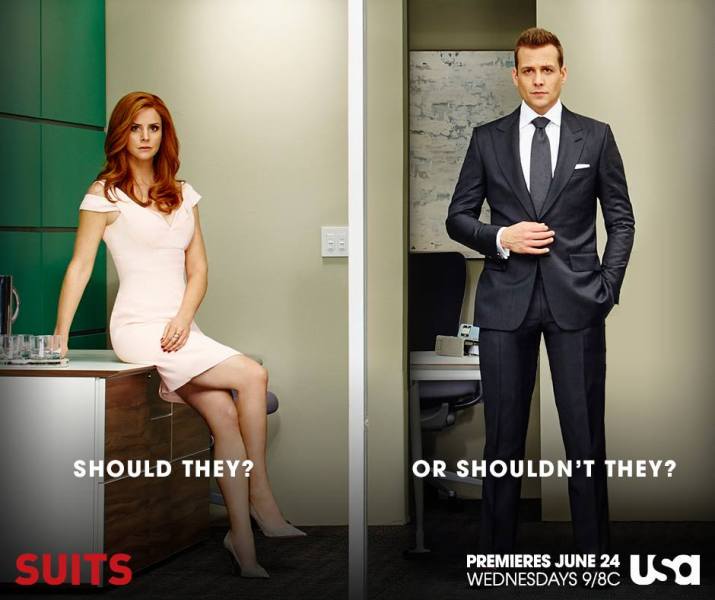 Last season’s cliffhanger was intensely focused on two people – Harvey Specter and Donna Paulsen, played by an impeccable Sarah Rafferty. The slow-burn tension has been building for the entire run, finally coming to a fever pitch when Harvey puts it on the line to save Donna from going to jail… before saying the line we’ve waited years to hear: “You know I love you, Donna.” But the emotional roller-coaster is too little, too late for Donna, who calls Harvey’s non-committal bluff and quits him for Louis, ending Season 4 on the cliffhanger that Suits pulls off so well.

Personally, I hope Darvey’s relationship evolves a bit more… maturely than Mike and Rachel’s. While Harvey is a serial commitment-phobe when it comes to relationships, Donna is the only person who can call him on his BS. Suits is all about greying the lines between professional and personal, and it’s about time Harvey gets really shaken up on the emotional front.

Are you catching the premiere of Suits Season 5 on Wednesday?

You can catch up on past episodes on Bravo’s website. Here’s their official description for the season 5 premiere:

In the Season 5 premiere of SUITS, Pearson Specter Litt has scored a hard-fought victory, but the fight has left the firm shaken. Although she avoided jail time, Donna (Sarah Rafferty, What if God Were The Sun?) has left Harvey (Gabriel Macht, Love & Other Drugs), after more than a decade of working together, and now works for his long-time rival Louis (Rick Hoffman, SAMANTHA WHO). And while Jessica (Gina Torres, FIREFLY) readjusts to being single, Mike (Patrick J. Adams, ROSEMARY’S BABY) and Rachel (Meghan Markle, Horrible Bosses) are giddy after his marriage proposal.